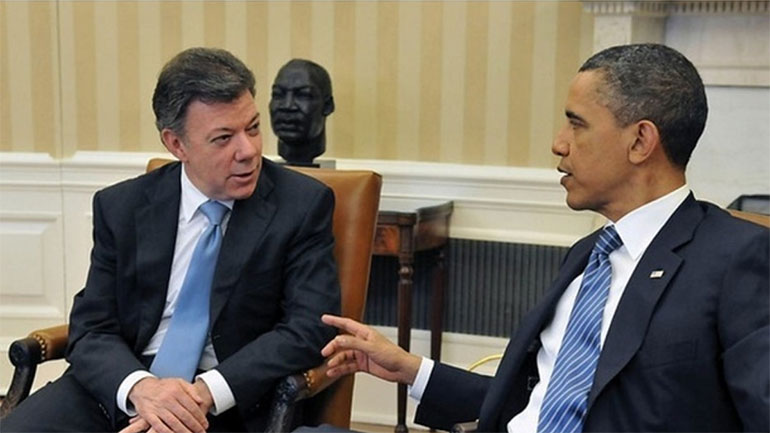 US president Barack Obama and his Colombian counterpart Juan Manuel Santos on February 4 will present a revised US policy that will be focused on peace building, according to Colombia’s ambassador.

The announced meeting was made by Colombia’s ambassador to Washington, Juan Carlos Pinzon, and confirmed by the White House to commemorate 15 years of Plan Colombia, a US-financed joint effort to curb drug trafficking from the South American country.

A revision in the military aid going to Colombia had already been announced by US Secretary of State John Kerry in October.

From financing war to peacebuilding

Plan Colombia was put together by the administrations of former President Bill Clinton and his Colombian counterpart Andres Pastrana in 1999, and came into force a year later.

While its initial purpose was to reduce coca production and trafficking in Colombia, it also financed the Colombian state’s offensive against leftist rebel groups that have been fighting the state since 1964 and rely heavily on drug trafficking.

The FARC, the largest of rebels groups are expected to be only months away from their own transition to a political movement while the ELN has said to be ready to begin peace talks of its own.

The possible end to Colombia’s 51-year-old conflict could result in a revised Plan Colombia focusing on multiple other groups engaged in drug trafficking, but will partially be used for peace building and prevention.

According to Pinzon, this revised Plan Colombia would include “issues like the investing in marginalized areas, the fight against organized crime, a new issues like education, innovation, and even the attention to members of the armed forces who have been injured and require specialized attention.”

When Kerry announced revised US help, UK press agency Reuters reported that social and environmental conservation programs would also be part of the revised aid to Washington’s most loyal ally in the region.

According to Pastrana, the president who initially signed off on the bilateral agreement, Santos will not be the only to attend the commemoration of 15 years of Plan Colombia.

Pastrana said that the White House was also seeking his presence and the meeting could be attended by former US presidents Bill Clinton and George W. Bush, and former Colombian President Alvaro Uribe, a vociferous opponent of Santos’ peace efforts.

Uribe has reportedly not spoken with Santos since 2011 when an ideological wedge began forming between the increasingly liberal-leaning Santos and the staunch conservative Uribe.

Additionally, the former president has seen several of his closest aides disappear behind bar over major corruption cases and their ties to right-wing paramilitary groups demobilized under Uribe between 2003 and 2006.

Neither the ambassador nor the White House have confirmed the alleged presence of former US and Colombian presidents at the February 4 meeting.