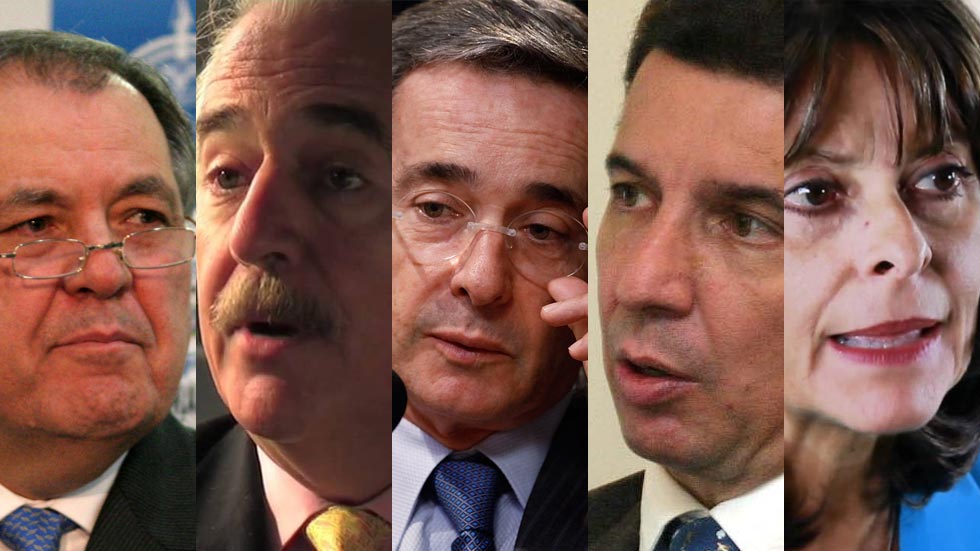 Colombia’s peace talks and a pending peace deal with the FARC are fiercely opposed by a vocal political minority.

This opposition is of a mixed ideological and practical nature, depending who the opponent it.

All opposition forces to the peace deal are conservative, but some more ideological about it than others.

Alvaro Uribe is by far the most popular, most outspoken and most controversial of critics.

Uribe appeals to a mainly conservative electorate with legitimate objections to the validity of an agreement that excludes prison sentences for war criminals and includes the possibility of war criminals to engage in politics.

Basically, the former president argues that the government is too lenient to the FARC considering how they have been militarily weakened when he was in power.

Uribe has highlighted the fact the FARC are considered a terrorist group, while rejecting his own administration’s human rights violations that has landed hundreds of soldiers and some top officials in prison.

In the case of the FARC, the rapprochement reportedly failed because the guerrillas lacked confidence that the hard-line Uribe would be willing to make concessions in regards’ to the rebels political ambitions.

Meanwhile, his military approach against the FARC showed much better results. He is widely credited for the military advances made against the guerrillas in the first years of his two-term presidency.

However, there is more to the story.

Uribe faces several criminal investigations related to a series of war crimes committed under his responsibility. Once there is a peace treaty with the FARC, the former president will likely have to respond before transitional justice tribunals.

The charges against Uribe includes the killing of thousands of civilians and alleged conspiracies with convicted paramilitary commanders against political opponents.

And there’s an even more personal touch to he former President’s Story. Uribe’s cousin Mario was sent to prison for his ties to paramilitary groups while his brother Santiago is in jail while awaiting trial for allegedly founding a paramilitary group in the 1990s.

Inspector General Alejandro Ordoñez is the most powerful sitting official, in charge of investigating and judging (elected) officials who allegedly committed irregularities in government.

Ordoñez is a staunch conservative and Catholic and has been accused by critics of abusing his position to persecute liberal and leftist forces in government.

The Inspector General’s opposition to the peace talks falls within his authority as he is the designated authority to point out irregularities in government, especially with an issue as important as peace talks.

However, the Inspector General has announced disciplinary investigations against literally every branch of government because of their support of peace talks, leaving him a lone force opposing almost the entire political and judicial establishment.

Important note: If the Inspector General survives attempts to annul his latest reelection, his term will end in December after which his opposition from within the state apparatus comes to an end.

Andres Pastrana was president of Colombia between 1998 and 2002, the years that Colombia almost was declared a failed state and an earlier round of peace talks with the FARC was held, but failed.

Pastrana is one of the representatives of a prominent dissident group within the Conservative Party that opposes the party’s support for the ongoing talks with the FARC.

However, as more and more points on the peace talks agenda were approved and became public, Pastrana began to break with his party’s pro-peace talks policy and began opposing the deal.

Pastrana’s critique, like Uribe, centers around the judicial leniency granted to convicted war criminals and the liberal reforms in regards to agriculture and political inclusion.

Also like Uribe, Pastrana should fear a post-conflict tribunal because state-loyal paramilitary groups were carrying out massive numbers of human rights violations in what appeared to be full impunity during Pastrana’s presidency.

Lafaurie and his wife represent the business interests of ranchers, who stand widely accused of having collaborated with far-right paramilitary groups. Some ranchers are among those who benefited most from the mass displacement by paramilitary groups and risk losing large swaths of land if they have to be returned to small farmers who had previously been displaced.

More imminently, newly appearing “anti-restitution armies” that threaten and kill land right activists or returning farmers are allegedly supported by ranchers fearing to lose land obtained during and after a paramilitary expansion in the late 1990s and beginning of this century.

Lafaurie should also face criminal charges if a post-conflict tribunal looks into the ties between Fedegan and the paramilitaries. A key intermediary between the AUC, the Uribe administration and the ranchers was top intelligence officials and alleged AUC member Jose Miguel Narvaez, also Fedegan’s former security adviser.

Narvaez is currently in prison for his role in wiretapping the Supreme Court, human rights groups and opposition figures during the Uribe administration.

Like Andres Pastrana, Marta Lucia Ramirez is a prominent Conservative Party member who has broken the party line in order to oppose the peace talks.

While running for president on the Conservative Party ticket in the 2014 elections, Ramirez did not reject the peace talks but kept a critical stance on concessions made to the FARC.

After the elections, Uribe’s former defense minister increased her opposition to the partial deals presented during the negotiations while maintaining contact with the political sectors that support a peace deal.

Ramirez even took part in a presidential peace commission, but resigned soon after claiming the commission was a sham. The public has since also not heard from the commission that is supposed to advise the president on post-conflict matters.

While to a lesser extent being implicated in human rights violations committed by the military while she was minister, Ramirez’ opposition has mainly appeared to have been for ideological reasons like justice that are widely shared by the general public.