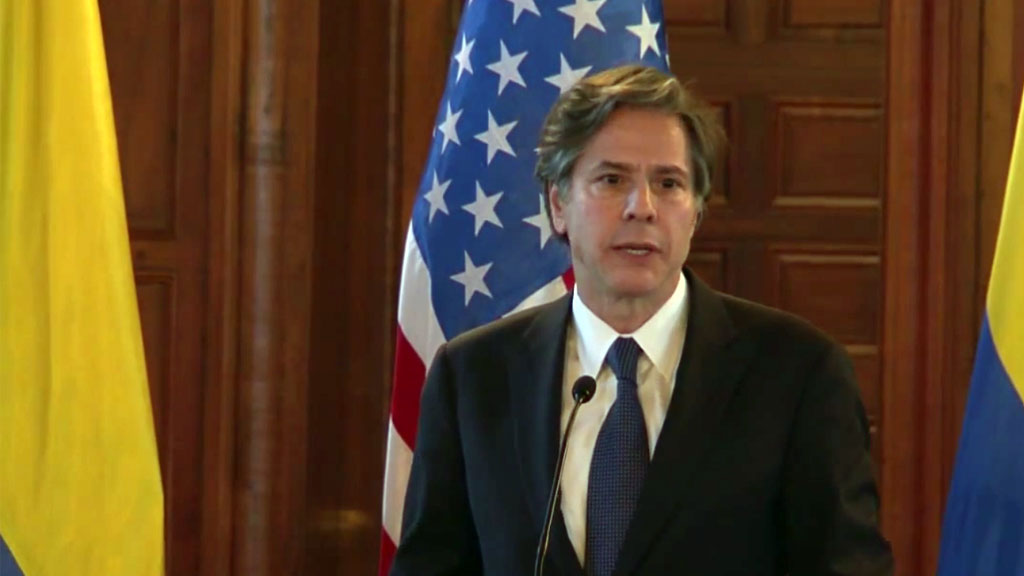 US pledges $600M in aid for Colombia

The aid package, announced following a meeting in Bogota that involved a US deputy secretary of state and Colombia’s Minister of Foreign Affairs, Maria Angela Holguin, is meant to help rebuild Colombia in the midst of a sensitive yet promising peace process.

The progress that has been achieved over the past five years is all “thanks to the courage and resistance of the Colombian people, which is translating into…a solid foundation for shared prosperity and lasting peace,” said US deputy secretary of state Antony Blinken.

Press conference of Blinken and Holguin

$5 million dollars will be donated to the de-mining of rural sections of Colombia that were formerly occupied by guerrilla group FARC. The group is currently in peace talks with the Colombian government following a brutal civil war that has lasted over 50 years.

“Since 2006, the State Department has provided more than $21 million dollars to supplement military and civilian de-mining operations,” said the U.S. via press release.

Land mines have reportedly killed over 11,000 people over the past 25 years. Colombia ranks second only to Afghanistan for number of injuries caused by land mines, reported news website Breitbart.

$800 thousand dollars will be given to the peace process with the FARC, which is responsible for the deaths of hundreds of thousands and the recruitment of some 18,000 child soldiers from 2008 to 2012.

Colombia aims to be free of landmines by 2021

The initiative will include displacement programs that will stretch throughout 25 municipalities, intended to strengthen local government and assist victims of forced displacement. In June 2014, over 4,000 indigenous Colombians fell victim to forced displacement over the course of only 5 months, according to a UN report.

The report said that cultural and physical extinction was a real risk for the affected communities (Awa, Embera, Eparara Siapidara, Nasa and Nukak).  These communities are part of the 35 indigenous groups recognized by the Constitutional Court of Colombia as being in danger of extinction.

The U.S. will thus launch the Colombian Action Plan on Racial and Ethnic Equality (CAPREE) in collaboration with a mixture of public and private sector organizations to create business and technical skills to adults and education to children. The effort will target indigenous and African Colombian refugees.

Collaborators will include the U.S. Department of Agriculture, which will assist to agricultural trade training, and the Martin Luther King Fellows, which gives English training to high school students throughout the country.

Women’s empowerment programs will also receive additional funding from the U.S. government. A program initiated in 2014, where female business owners of small and medium-sized enterprises will have the opportunity to meet twice a week and receive training on how to improve and expand their businesses.

These programs are part of an effort that has shown positive results for years, since peace talks first began, although recent incidents, namely an attack in Cauca killing 11 soldiers and 2 guerrillas, has complicated the negotiations.