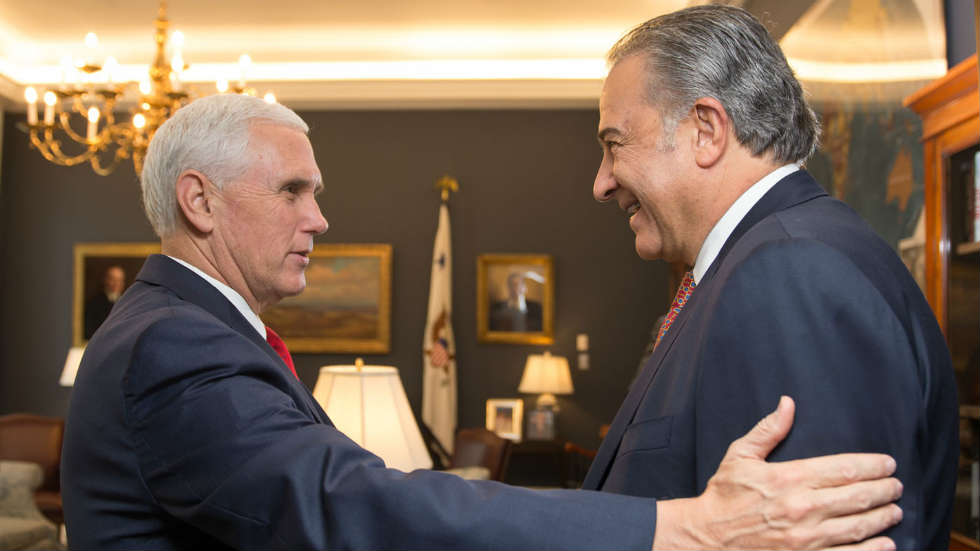 The United States will ask to resume aerial fumigation of coca if a United Nations-monitored crop substitution strategy fails to curb record cocaine production levels, according to Vice-President Oscar Naranjo.

The former Police general spent last week in US capital Washington DC where he met with his counterpart Mike Pence and a number of top government officials and members of Congress.

Naranjo’s was in the US for top talks on strategies to curb cocaine trafficking, an ongoing peace process with demobilized FARC rebels, a crisis in neighboring Venezuela and trade.

Bogota and Washington DC have clashed over which strategy to use to curb drug trafficking over the past months.

The US agreed to refrain from urging immediate action and agreed to increase efforts to counter transnational drug trafficking organizations serving the American consumption market, Fajardo told press at the end of his trip on Friday.

What we have told them is that we need and deserve an opportunity to show that the plan we have for forced eradication and manual substitution is starting to work.

Coca cultivation and cocaine production reached record levels in 2016 in Colombia, while remaining stable in other cocaine producing countries like Peru and Bolivia.

Pence agreed to step up measures to seize cocaine shipments on route to the US.

The leaders also discussed opportunities to amplify interdiction operations that can halt existing drug shipments from reaching US shores.

The peace process that seeks to end more than half a century of violence with the Marxist FARC group introduced a new strategy to curb drug trafficking, rural investment and crop substitution.

However, the Colombian government has failed to obtain the necessary funds for this program, the post-conflict minister admitted recently.

Illegal armed groups engaged in the drug trade have violently opposed the strategy and have killed both security officials and community leaders.

The US has expressed its preference against the more aggressive methods to eradicate at least 150,000 hectares of coca.

The United Nations last month agreed to monitor Colombia’s counter-narcotics efforts on top of ongoing monitoring of other parts of the peace process.

US President Donald Trump surprisingly threatened to decertify Colombia as a non-cooperative country in the US’ war on drugs.

Efforts to forcibly remove coca have resulted in the removal of almost 40,000 hectares, but have come with a major human cost.

More than 10 farmers have already died in police operations. Dozens of policemen have been killed by illegal armed groups.

Colombian President Juan Manuel Santos has called the war on drugs “even more harmful than all other wars combined” when receiving his Nobel peace prize in 2016.

The US and Colombia have worked together for decades to curb drug trafficking, but with mixed results.