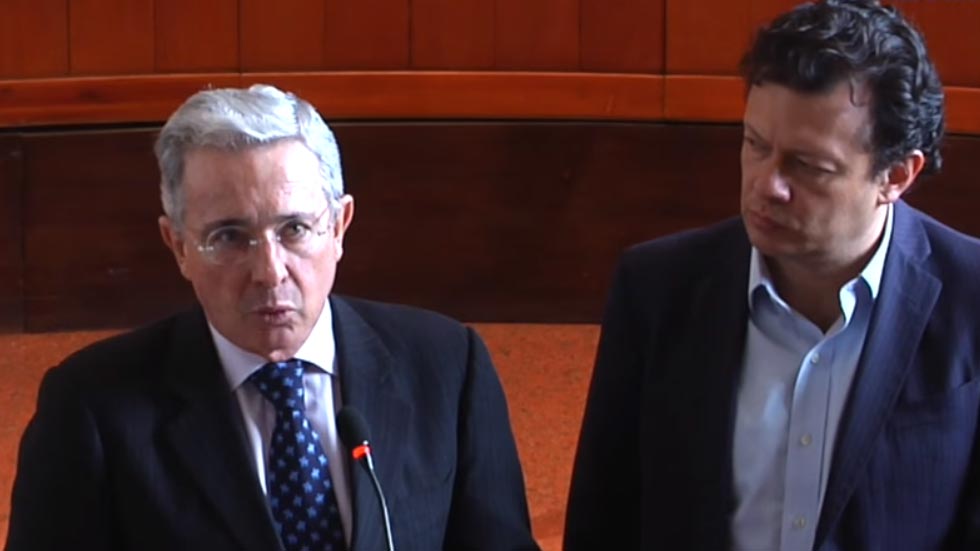 It took court orders, but Colombia’s hard-right former President Alvaro Uribe has begun asking forgiveness to victims of war crimes and journalists after years of refusing to do so.

Uribe’s most recent apology was directed at the mothers of 11 boys and men from the city of Soacha who in 2008 were kidnapped and executed by the military, and later presented as guerrillas killed in combat.

Instead of acknowledging what turned our the first publicly known case of “false positives,” Uribe called the victims “thugs” spurring the victims’ mothers to successfully sue him for slander.

After the mothers sued the former president, extreme right paramilitary group “Aguilas Negras” began sending them death threats, the son of their defense attorney Luis Eduardo Fajardo was assaulted and shot and his father received a letter and a bullet from the paramilitary group.

What happened to your son Christian is a sample of what we can do to you and your family.

The mothers refused to be intimidated by the terror tactics, and after years of refusal to accept responsibility, a Bogota judge forced Uribe to retract his false accusation and apologize on May 19.

I ask forgiveness to the mothers of Soacha, to the plaintiffs Luz Marina Bernal Parra, Maria Ubilerma Sanabria Lopez, Lucero Carmona Martinez and Maria Doris Tejada Castañeda, and the remaining mothers who weren’t plaintiffs, for the words I have either written or said and that were offensive and have caused pain.

Paradoxically, 90 minutes later when media began reporting on his apology, Uribe forwarded a tweet of former paramilitary associate and newspaper columnist Ernesto Yamhure in which the current Democratic Center adviser said the reports on the public apology were “fake news.”

Earlier, a judge had forced Uribe to retract accusations against former journalist Holmann Morris he had accused of being a “terrorism apologist.”

After filing his lawsuit, Morris was also threatened by the Aguilas Negras.

Nevertheless, Morris persisted and ultimately won, forcing Uribe again to publicly retract his statements with Morris looking over his shoulder.

Hollman Morris has expressed today that he is not, and has not been a terrorism apologist. I believe him and if I have said it, I rectify.

While Uribe continues to resist an ongoing peace process with the FARC and the Uribe-loyal Aguilas Negras continue to threaten anyone who challenges Uribe, the weight of justice has only just begun falling on him.

Victims of “Operation Orion,” in which the military, police and paramilitaries attacked Medellin’s western 13th District, have also sued Uribe to respond for the war crimes that occurred in operations ordered by Colombia’s former president.

Uribe, as per usual rejects all responsibility in spite the Colombian state already having been convicted for his actions. But the victims don’t care about the hard-right politician’s ego, and even less his reputation.

For 14 years we have demanded truth, justice and reparation, but what we got was justifications, impunity and persecution. Because of this, we firmly state today: Mr. Alvaro Uribe, … you do not represent us, to the contrary, and we demand that you too commit to tell the truth, admit responsibility and commit to respect the rights of the victims.

Uribe may resist and the Aguilas Negras may continue to threaten anyone challenging the former president, but justice has barely begun.

In a matter of months, the Transitional Justice System that will try the war crimes committed under Uribe’s watch will take force and is like to go after the former president who the paramilitaries consider “Colombia’s best-ever president.”