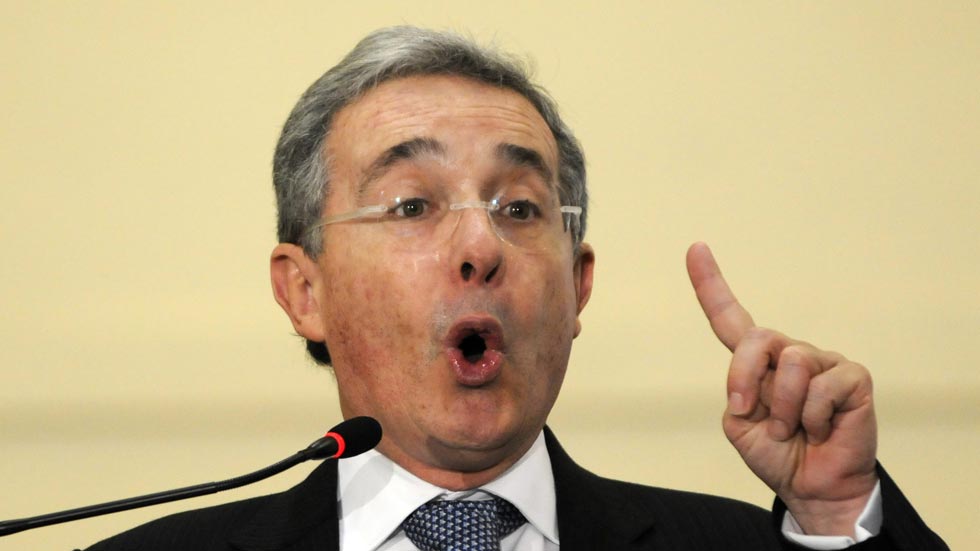 Uribe, who was president between 2002 and 2010, demanded on Twitter that members of the police, the army and civilians allegedly involved in war crimes be excluded from the special tribunal that is being set up to bring justice to the country’s 8 million victims of Colombia’s five-decade long armed conflict.

“It is unacceptable that our military and police, members of the Armed Forces of democracy and not of a dictatorship, be brought to the International Criminal Court in many cases for false accusations or to the justice of terrorism so that they have to recognize crimes not committed as a condition to avoid going to jail,” said the current Democratic Center senator.

Uribe’s latest proposals include a suggestion that instead of the Special Jurisdiction for Peace (JEP), members of the armed forces and third party actors accused of war crimes be brought before a temporary room in the Supreme Court to analyse the accusations.

The senator reacted to a report from the International Criminal Court submitted to the Colombian government that questions the thoroughness of an investigation of 23 generals and six active and retired colonels who commanded military units involved in the execution of 1,228 civilians who were subsequently presented as guerrillas killed in combat.

The ICC warned recently that if the ordinary justice and the JEP do not do enough to bring about justice, these cases will be brought before the international body.

Uribe proposes that “under any circumstances” military personnel who have been in the prison for five years or more should be released on the condition of parole.

Uribe’s comments come as the peace process with the FARC rebels advances towards transitional justice, a phase that the former Antioquia governor had repeatedly opposed as he himself may head the list of those implicated for war crimes.

Minister for the Interior, Guillermo Rivera responded almost immediately to Uribe”s proposals labeling them as “untimely” given that the legislation for the establishment of the JEP and its jurisdiction has already been passed.

“It is an untimely proposal since, remember, a legislative act has already been approved, that is to say that it is a constitutional norm that is already part of our political charter and clearly states that the Special Jurisdiction for Peace will have jurisdiction over all those facts related to the armed conflict, “explained Rivera to the media.

Despite the claims by Uribe that the JEP should focus solely on the alleged war crimes of the FARC guerrillas, the Colombian state and its paramilitary allies are allegedly liable for a greater number.

Uribe’s comments may be a last-ditch attempt to steer the transitional justice mechanism away from the fact that the state, under consecutive presidents has been guilty of committing the most heinous of war crimes.

According to the National Center for Historical Memory, the FARC committed 3,899 homicides between 1980 and 2012, the year peace talks with the administration of President Juan Manuel Santos were formalized.

In a January 2014 report, the Prosecutor General’s Office said it had found that the armed forces, with the help of paramilitary and civilian collaborators, had executed 4,212 civilians since 1986 to report them as guerrillas killed in combat.

To make the slowly emerging truth even more inconvenient, Nobel Peace Prize winner Santos was defense minister between 2006 and 2009, the years in which the security forces executed 2,364 civilians, according to an earlier prosecution report.

Both Uribe and Santos have long known that the International Criminal Court is not interested in soldiers or rank and file guerrillas, but demands — as international humanitarian law requires — that those “ultimately responsible” be punished.

This could explain why the association of retired generals Acore has so vehemently opposed the peace process and why Uribe has long sought a Nuremberg Trial-type partisan justice in which justice is imposed only on one actor in the war.

Because — once the Transitional Justice Court takes force — Uribe is expected to respond not just for a paramilitary massacre in the small town of El Aro, and (para)military operations “Genesis” in 1997 and “Orion” in 2002. He will also be called to trial to explain the 4,000 homicides committed when he was commander in chief.

In what appears to be a desperate attempt to evade justice, the former president has pushed every possible button to either discredit or de-legitimize the peace peace process and this latest attempt just highlights how uncomfortable the upcoming transitional justice mechanism is making him feel.

But time is running out for Uribe.