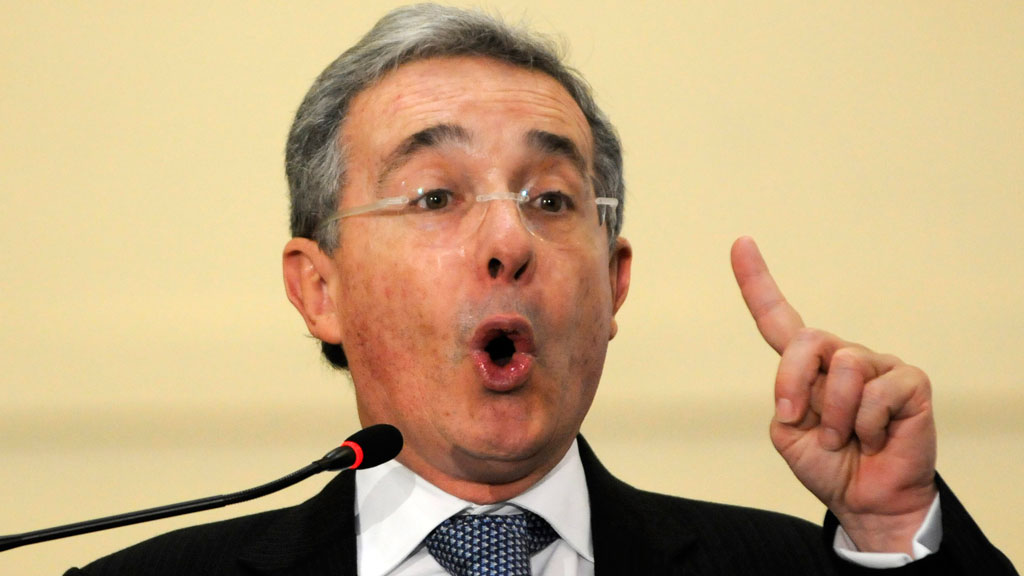 Colombia’s ex-President Alvaro Uribe on Tuesday rejected a suspension of bombings of FARC camps, stating that the guerrilla group has failed to comply with the unilateral truce it imposed to advance peace talks.

President Juan Manuel Santos on Tuesday announced that the military will suspend air strikes on camps of rebel group FARC for one month in response to a unilateral ceasefire agreed to by the guerrillas in December.

Santos and the guerrillas have been holding peace talks since November 2012 and are currently trying to de-escalate the country’s 50-year-long armed conflict.

However, “the suspension of air strikes against the FARC is giving way to the narcoguerrilla to continue committing crimes and causing intimidation,” said Uribe in a press release.

According to Uribe, the FARC have failed to comply with their unilateral ceasefire.

The former president used a recent attack on a police station in the southern Neiva department as an example.

In this attack, alleged FARC guerrillas threw a grenade to the police post, injuring two officers, according to Defense Minister Juan Carlos Pinzon.

If these allegations are true it would be the first breach of the ceasefire since it came into force on December 20.

Additionally, “the FARC increase their extortion in Tolima and Huila. With terrorism they have destroyed the economic activity of Putumayo,” accused Uribe in one tweet.

The ex-president even suggested that FARC guerrillas dress up as fighters of the ELN, Colombia’s second largest rebel group, to continue offensive actions in the southwestern Cauca state and the southern Tolima state.

“The FARC wounded soldiers in Dolores, Tolima, and passed as members of the ELN,” Uribe stated, adding that “to continue criminal activity in Cauca they use ELN uniforms.”

However, Dolores Mayor Carlos Alberto Torres told Tolima newspaper El Nuevo Dia that Uribe was lying and that there has not been any combat situation or rebel attacks in his municipality for three years.

Colombia Reports was unable to verify whether there had been combat between the ELN and the military in Cauca as no such thing had been reported in local media.

On the premise of his accusations, Uribe said that the suspension of the bombing will provide the guerrilla group with the increased ability to commit a host of crimes in rural areas.

The leader of the Democratic Center Party has previously suggested that intelligence information about terrorist activity is being concealed and warped by the Santos administration.

“The Commander General of the Armed Forces has ordered the word FARC to not be mentioned when terrorists of the organization commit crimes,” Uribe claimed.

However, according to both the government and independent observers, the FARC have largely complied with the indefinite ceasefire that took force on December 20 and have kept the fighters mainly at their rebel camps.

The rebels called this ceasefire after agreeing to a de-escalation of armed conflict while negotiations towards an indefinite bilateral ceasefire take place in Cuba.

Santos assured on Tuesday that the Colombian population will not be at danger as a result of his decision to suspend FARC bombings.

“At the end of this period we will again revise the FARC’s compliance to the ceasefire. Depending on those results we will decide if we continue with this measure,” the president said.

“In any case we do not renounce bombings if we detect an imminent threat to the population,” the Santos assured.

The suspension of air strikes means that for the first time in years, the approximately 7,000 armed FARC members can rest without fear of attack from airplanes overflying their camps.

This eliminates the necessity for the FARC troops to retaliate in self-defence, reducing the overall level of conflict and hopefully making steps towards an indefinite ceasefire between the guerrillas and the government.

The FARC and the Colombian government have been engaged in negotiations since November 2012.

If the peace talks prove successful they will end a conflict that according to official statistics has left more than 7 million victims.