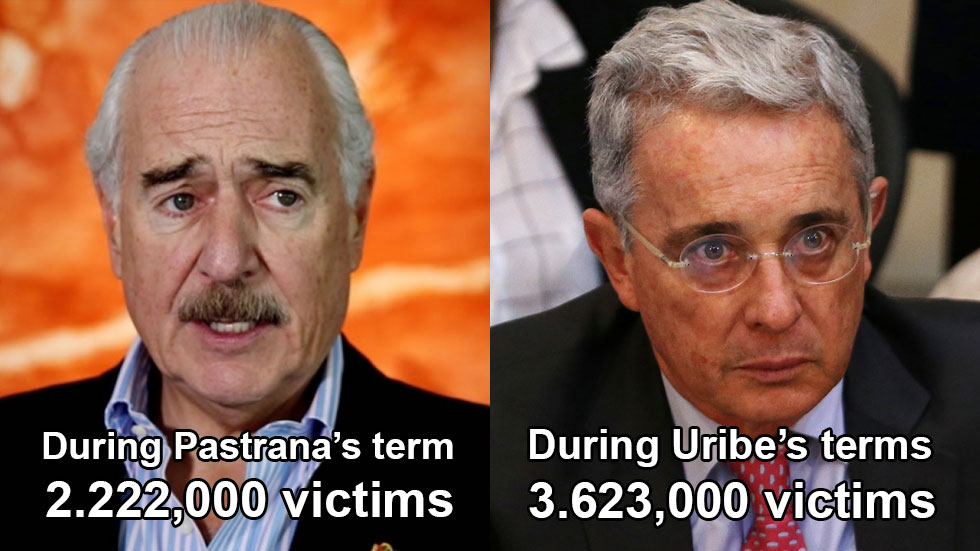 After years of mutual dislike and accusations, former Presidents Alvaro Uribe and Andres Pastrana have teamed up in an attempt to tumble Colombia’s peace process in the 2018 elections.

The odd couple has been forced to team up as the two president with the worst human rights records of all living former presidents is expected to clarify the skyrocketing rates of victimization that took place while they were president.

More than 70% of all victimization of civilians during Colombia’s 53-year-old armed conflict took place in the 12 years the Bogota dynasty politician and the hard-right Medellin politician were in office, according to left-leaning political analyst Leon Valencia.

Neither Pastrana nor Uribe personally killed or raped anyone — although you can never tell with Uribe because of his family’s intimate ties with the Medellin Cartel — but with presidential power comes responsibility.

The Truth Commission that is currently being set up has been urged by the International Criminal Court (ICC) that those ultimately responsible be held accountable an the victimization of 5.8 million Colombians that took place under Pastrana and Uribe is difficult to hide.

Victimization in Colombia per president

Both presidents have long been able to avoid taking any responsibility, partly because of Colombia’s almost absolute impunity rate and in spite of international court sentences that particularly could mean the political death of and even imprisonment for Uribe.

In spite of being Colombia’s worst-performing presidents in regards to public safety, the two politicians and Uribe’s hard-right Democratic Center are a force to be reckoned with as they are proven masters in the art of deception and have been able to coerce Colombia’s electorate into almost self-destructive behavior.

It were these two former presidents who successfully promoted the sinking of an initial peace deal with the FARC in October last year after months of bombarding Colombia’s electorate with lies and disinformation, effectively contributing to an eruption of post-FARC political and criminal violence.

Also since then, the two former presidents and their political allies have continued to radicalize and agitate their electoral base to the point that so-called “uribistas” blamed the French victim of a recent bombing of a Bogota shopping mall of being the perpetrator of the terrorist attack that killed her and injured her mother.

Through a victory in Colombia’s 2018 election, their coalition of radicalized conservatives seeks to “rip the peace deal to fucking pieces,” as one Uribe-loyal lawmaker put it.

Both Pastrana and Uribe have vowed to adapt the peace deal, which would effectively end the 10-year peace process that seeks to end the violence that has killed more than 265,000 Colombians.

While Pastrana is widely disapproved and ridiculed, Uribe is able to mobilize a large numbers of voters, especially in his home province of Antioquia where, paradoxically, most civilians were executed by the military under Uribe’s watch in the euphemistically called “false positives” scandal.

Pastrana’s inability to govern nearly led Colombia to become a failed state, while Uribe’s disregard of the law is one of the reasons he is linked to a massacre, death squads, land-grabbing and the illegal spying on the Supreme Court in an apparent, but failed attempt to keep his cousin out of prison.

The enemy of justice is my friend

The two former presidents have long been able to drink each other’s blood and have turned against each other on multiple occasions.

Liberal Party dissident Uribe got elected in 2002 by bashing Pastrana’s disastrous governance and his failed peace process with the FARC.

Pastrana, a traditional conservative, has long bashed Uribe’s hypocrisy and his family’s ties to the Medellin Cartel.

One day we will write what happened to the national sovereignty in Colombia, how he surrendered it to guerrillas and paramilitaries

Uribe about Pastrana in 2005

Explain to me how Uribe sat down with drug traffickers, with the Medellin cartel and the paramilitaries, and does not give Santos a chance to carry out a process with the guerrillas?

Pastrana about Uribe in 2012

Pastrana supported the peace talks with the FARC until the administration of President Juan Manuel Santos (U Party) revealed the justice agreement and it dawned on the former president he was going to have to respond for the millions of Colombians who were victimized under his watch.

Uribe had already fallen out with Santos over the latter’s betrayal of his former boss by successfully proposing a political enemy of Uribe, Viviane Morales (Liberal Party) as Prosecutor General, further pushing the former president in the corner over his family’s involvement in the Medellin Cartel and his own promotion of paramilitary groups that ultimately because the armed conflict’s main victimizer.

If the transitional justice tribunal and the truth commission are able to swiftly proceed with the prosecution of war crimes, the two presidents could meet their political death before the 2018 elections already.

However, processes like this hardly ever go swiftly, especially not in Colombia where the number of (former) state officials either convicted for or charged with war crimes is more than three times the size of the country’s formerly largest rebel group.

This means that chances are that the two could again deceive Colombia into voting in favor of the country’s own victimization as they have done on multiple previous occasions.