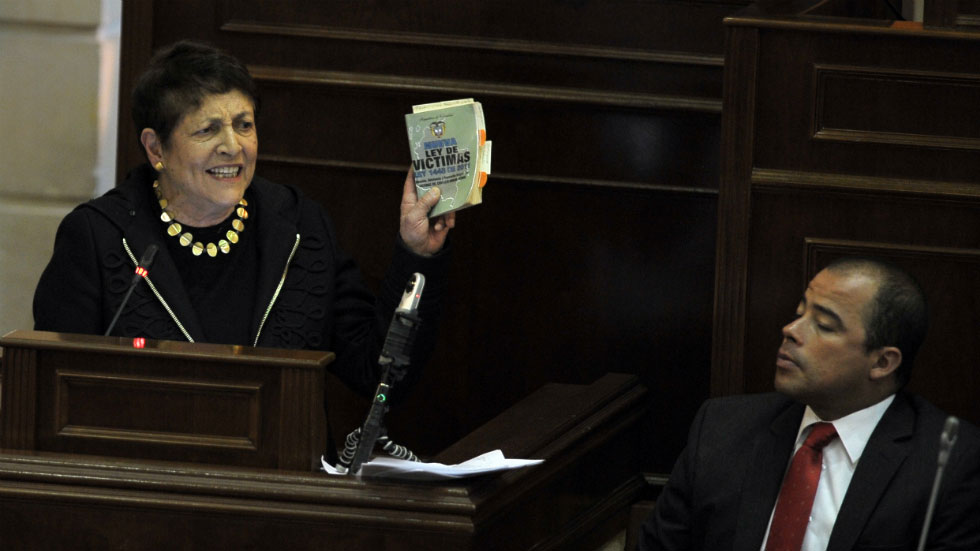 Former President Alvaro Uribe walked out of a commemorative service for the 8 million victims of Colombia’s armed conflict on Sunday after victims criticized the politician accused of multiple war crimes.

Uribe, both a victim and accused of multiple war crimes, was initially one of the few congressmen who attended the memorial service.

In spite of the country going through a peace process, more than half of congress simply refused to pay respect to the victims on National Victims Day.

More than 40 victims did show up to be heard about their plight.

However, the service went from bad to worse after the intervention of the daughter of Jorge Eliecer Gaitan, the Liberal Party leader whose 1948 assassination sparked a decade of extreme partisan violence.

In her speech and under applause by victims, Gaitan accused Uribe of having sued her 44 times, effectively ruining 10 years of her life in lawsuits that ultimately absolved her of all Uribe’s accusations.

Uribe demanded his right to reply, but was told by House Speaker Miguel Angel Pinto he had to wait until after all 43 victims had spoken.

Under increased booing from war victims, the politician and his hard-right Democratic Center party then decided to leave the memorial service.

What Uribe did was another act of revictimization, denying us the opportunity to tell him how we feel.

The next speaker, Maria Medina of the Autonomous Table of Indigenous Victims, slammed Uribe for having the audacity to interrupt the victims during their own memorial service.

Medina and other victims then turned to criticizing the government of Juan Manuel Santos, who they accused of not effectively working towards real peace, but “peace on paper.”

Others criticized the government for allegedly imposing restrictions on victims’ possibilities to sue alleged victimizers in the pending Transitional Justice System (JEP).

According to Elizabeth Liñan of the Association of Displaced Afrocolombians, said her organization surrendered 750 cases sexual violence committed against victims, without hearing one word from the Prosecutor General’s Office.

There must be a direct dialogue with the victims. Peace and reconciliation is possible if the truth is known and the violence suffered by Colombia’s women is repaired.

Other victims also complained they have been ignored both in times of war and peace.

“We feel our voices are ignored and there must be more reparation for those who have become victims,” Maria Eugenia of Afromupaz told the remaining lawmakers, some of whom sneaked out in the middle of the ceremony.

According to retired marine Andres Mauricio Salazar, who lost a leg after stepping on a landmine laid by FARC rebels, elements within the peace process constitute acts of revictimization, claiming that soldiers injured in combat were denied opportunities that would help them find work.

What was supposed to be the highlight of the Day of Memory and Solidarity with Victims of the Armed Conflict turned out a day in which hardly any solidarity with the victims was shown.