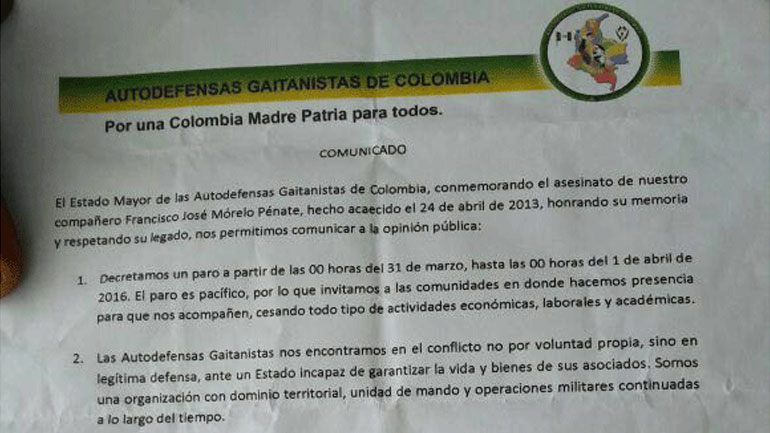 Are the Urabeños negotiating with Colombia’s government?

Exactly like Colombia’s leftist rebel groups FARC and ELN did while secretly negotiating peace with the government, neo-paramilitary group “Los Urabeños” has also stepped up violent activity while calling for peace talks.

The dramatic escalation of violence that shut down parts of northern Colombia over the weekend has prompted some to question if the Urabeños are set to engage with the government in a similar fashion.

The Urabeños, who call themselves the Gaitanista Self-Defense Forces of Colombia, are quite explicit about their wish to take part in a peace process in which they can negotiate their demobilization in return for judicial benefits, possibly even amnesty.

“We believe that for there to be peace in our country all the armed participants in the conflict must be included,” the Urabeños said just weeks ago.

According Ariel Avila, a researcher at the Peace Foundation and Reconciliation, claimed that the  Urabeños are seeking to “cling to, and get something out of the peace process with the FARC and now with the ELN”.

As the government seek to finalize a deal with the FARC that would involve demobilization of the country’s largest left-wing guerrilla group, the recent violence of the Urabeños has raised concern that they will pose an increased threat to security.

The recent show of strength has by default put them on the political spectrum.

Avila believes that recent actions by the Urabeños make the situation increasingly difficult in the midst of the two peace processes.

“The atmosphere is very complicated because they have killed six social leaders in the last two or three weeks. The FARC accused them of being paramilitary groups, but the government says it is organized crime.”

“And the other thing is that in many parts of the country, such as Putumayo, criminal bands like The Construction, are gathering people to say, ‘when the FARC lay down their arms you still pay us’. Then there is fear of a retaking of territory by these bands,” added Avila.

During Thursday’s “pacific strike”, the neo-paramilitaries carried out attacks on police stations, police personnel  and ordered an economic shutdown in the North of Colombia making a mockery of the security forces there.

On Friday, it was expanded to expanded to Colombia’s second biggest city, Medellin causing widespread disorder and panic.

Despite President Santos’s dismissal of the group as “criminals”, the scale of the shutdown cannot be ignored and follows the same pattern as violent escalations that preceded talks with the FARC and ELN rebels.

Colombia’s largest rebel group the FARC, who are currently at the latter stages of peace negotiations with the government opted to dramatically increase attacks in order to boost their bargaining power at the negotiating table.

The Marxist-inspired FARC, entered formalized talks with the Colombian government in November 2012.

In advance of the talks there was a notable increase in violence.

Terrorist attacks in Colombia went up in 2012: US

According to a report by the US Department of State on terrorism, attacks by the FARC rebels increased by 50% in comparison with 2011.

The report outlined that attacks were “almost a daily occurrence including “the launching of mortars at police stations or the military, explosive devices placed near roads or paths, sniper attacks, and ambushes.”

The increase in FARC activity in 2012 lasted up to the initiation of the talks in November of the year.

The report noted, there was then a “significant drop in attacks” mainly attributed to the unilateral ceasefire announced by the rebels between November 2012 and January 2013.

They had been in exploratory talks with the government for more than two years but in similar actions of the FARC, the ELN stepped up their attacks ahead of agreeing the framework.

Ahead of the proposed final meeting on October 26 last through which a Table of Dialogue was to be established, the rebels attacked a military patrol killing 11 soldier and one policeman.

Subsequently, following the fiftieth anniversary of the death of the priest Camilo Torres, who was one of the main leaders of the guerrilla group, the ELN decreed an armed strike between 14 and 17 February.

According to reports from the Ombudsman, in 25 municipalities of 10 departments, they committed around 56 actions, including attacks on the security forces, attacks on infrastructure and the installation of illegal checkpoints.

Among the most serious incidents was the murder of three policemen, the bombing of the electrical infrastructure which left hundreds of people in the dark for several days and the bombing of the Caño Limon pipeline which caused a halt to pumping operations.

The rebels also caused a suspension of public transport in several municipalities in the east.

Speaking of their attacks the rebels did not deny that the attacks were aimed at increasing their leverage at the negotiating table.

The guerrillas said that these attacks “do not contradict our desire for peace but correspond to the context of war in Colombia.”

The escalation was seen as a clear show of might for the very purpose of political negotiation.

The recent chaos caused by the Urabeños illustrated the potential threat that they hold which is all the more relevant ahead of the possible imminent demobilization of the FARC and the ELN’s engagement in talks.

In a recent statement, the neo-paramilitary group denied that their top leader, Dairio Antonio Usaga, alias “Otoniel” is looking to negotiate a surrender.

“It is completely false that Dairo Antonio Usuga David, who for us is the Commander Otoniel, is looking for approaches in order to submit to justice, and surrender the structure of Gaitanistas Defense Forces of Colombia,” the statement said.

Instead of surrendering to justice, the Urabeños said they want to negotiate a trade-off, exactly like the FARC and ELN before them.

“What we have said and we take this opportunity to do it again, is that we are no strangers to peace in Colombia, we believe that for there to be peace in our country all the armed participants in the conflict must be included,” read the statement.

This was an inclination that was evident in the pamphlet that the Urabeños circulated before last weeks’s strike according to Diego Sierra, coordinator of the Observatory of Human Rights and Peace of the Popular Training Institute (IPC).

After 72 hours of terror, Santos tells Colombia ‘not to be intimidated’

The Santos government continue to insist that the group are nothing but drug trafficking criminals.

The Urabeños consider themselves a continuation of the paramilitary forces that helped the state combat guerrillas until the AUC’s demobilization between 2003 and 2006.

The group’s commanders are all former AUC members who refused to demobilize after peace talks with the administration of former President Alvaro Uribe.

The group is only one of half a dozen groups that were founded by dissident AUC members during and after the paramilitaries’ demobilization.

Santos claims that they had their opportunity to negotiate during this process.

Sierra concluded that dismantling paramilitarism is essential in order for the peace processes to work, and this indicates that “there is a need for the State to create mechanisms to demobilize these sectors who are organized militarily.“

In light of the events of the last week with the Urabeños, it is more conceivable that the neo-paramilitaries may be in line to negotiate with the government.