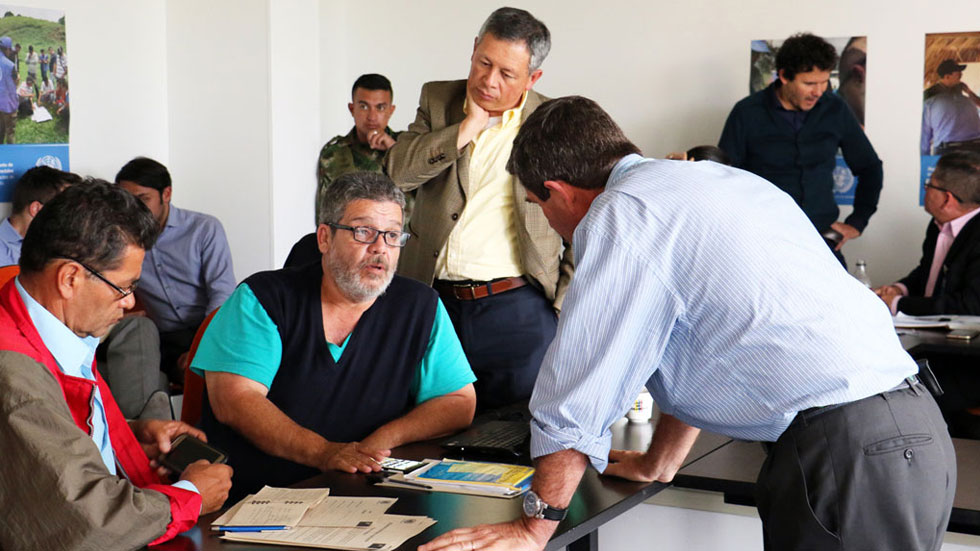 Following Colombia’s first ceasefire breach, the United Nations-led Tripartite Monitoring and Verification Mechanism is in place to investigate the incident and prevent escalation.

The Colombia peace deal’s monitoring and verification mechanism is now investigating the deaths of two FARC guerrilla members killed in combat with the military just days after a new peace deal was signed.

This commission is comprised of Colombian government and FARC representatives and coordinated by the UN mission in Colombia.

Its job is to respond as promptly as possible to any potential breach of the ceasefire between the state and the FARC that was provisionally reinstated after Colombia’s voters turned down the peace process in an October 2 referendum.

Only days before a revised peace deal is presented to Congress, the commission was forced to go to work after two alleged FARC guerrillas were killed by the military.

“The tripartite Mechanism deeply regrets and expresses concern about the first deaths since the beginning of the Bilateral Ceasefire and Cessation of Hostilities, on August 29,” the UN said in a press release on the matter.

The two sides have provided conflicting accounts of the incident, and are at odds over whether or not it qualifies as a violation of the cease fire, which is where the UN comes in.

If the majority of the commission finds one of the parties breached the cease fire, its top priorities will be to determine how serious the violation and why it occurred, and then promote corrective measures.

The commission has called upon both parties to facilitate the flow of information regarding the incident, and is open to receiving information from the public as well.

The deaths highlight the fragility of the cease fire and the need to hasten the implementation of the peace agreement, the government’s chief negotiator Humberto de la Calle said following the deaths of the FARC guerrillas.

“There is a discrepancy in the narrative but the battle shows a lesson that the ceasefire itself is fragile.”

The chief negotiator added that “we can not linger if there is a new agreement, if we have a new opportunity to end the conflict in Colombia, we can not miss that opportunity.”

The UN Office of the High Commissioner for Human Rights (OHCHR) in Colombia has also expressed its concern regarding areas where the FARC has already vacated and “post-paramilitary criminal groups” are attempting to fill the power gaps left behind.

These criminal groups are taking advantage of the vacated areas where the illicit economies in place have not yet been transformed due to the lagging peace deal.

“In several places where the FARC had a presence…there are now areas of confusion over who has the power and influence, and that is generating factors of violence,” OHCHR representative Todd Howland said.

“Failure to implement this [peace] agreement is generating real costs for the people that live in these territories,” he continued.

The Mechanism is also investigating another alleged incident in Tumaco, a municipality in the southwestern part of the country.

Amid the heightened tension, “the tripartite Mechanism highlights the importance of maintaining the parties’ commitment to respect” the cease fire, according to the UN press release.