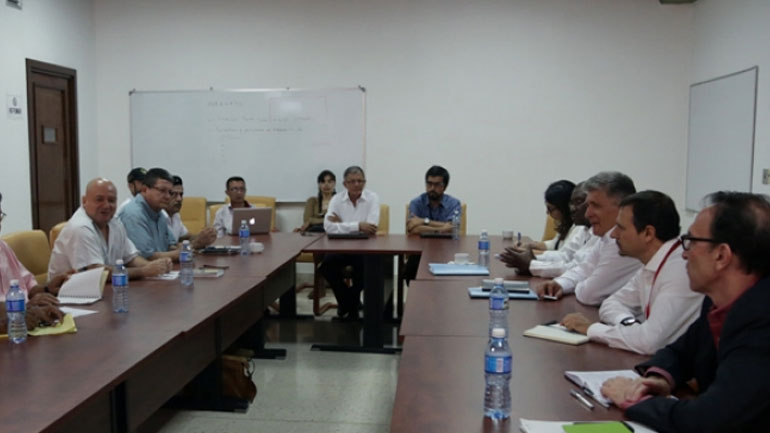 United Nations delegates met with FARC negotiators for the first time in Cuba on Sunday to discuss measures to deescalate Colombia’s armed conflict for the duration of peace talks.

The UN delegation will be in charge of monitoring and verifying a bilateral ceasefire if the government and the rebels are able to agree on one, while negotiating the end of the armed conflict that’s been going on in Colombia since 1964.

The delegation is led by the UN’s Assistant Secretary-General for Political Affairs, Miroslav Jenca of Slovakia.

According to the UN’s office in Colombia, the five-person delegation traveled to Cuba on Saturday for scheduled meetings with both the FARC and the government.

The UN team first met with members of the FARC’s main negotiation team and members of the guerrillas’ subcommission dealing with “End of Conflict,” one of the two remaining points of the agenda.

The UN commission has yet to meet with the government delegation.

The meetings with the warring parties are part of the UN’s commitment to push ahead the peace talks that entered in crisis earlier this year.

The idea is that while the main negotiation team deals with justice, the subcommission on the end of conflict paves the way for an eventual bilateral and definite ceasefire.

However, the government insists that for a bilateral ceasefire to be possible, the FARC must explicitly agree to surrendering their weapons in the event of peace.

“The government does not agree with transitional and temporary truce and ceasefire formulas, terms that have been used by the guerrillas,” the government’s lead negotiator, Humberto de La Calle, said in Bogota.

“When we talk about a ceasefire we are not talking about something that happens gradually or in a chain of events, we are talking about ending the conflict,” De la Calle added.

Efforts by both parties to deescalate violence agreed in December were undone by mutual attacks in April and May that led to an increase of violence.

Additionally, the negotiators appear stuck on the subject of justice, which could have legal consequences for the guerrillas and top officials in government because of the tens of thousands of war crimes committed by both parties.

The resumption of violence earlier this year, together with an apparent lack of progress in Havana, have decreased public support for the talks. The majority of Colombians have indicated in polls to be pessimistic whether the talks will result in a peace deal and the end of the FARC’s 51-year-long war against the state.