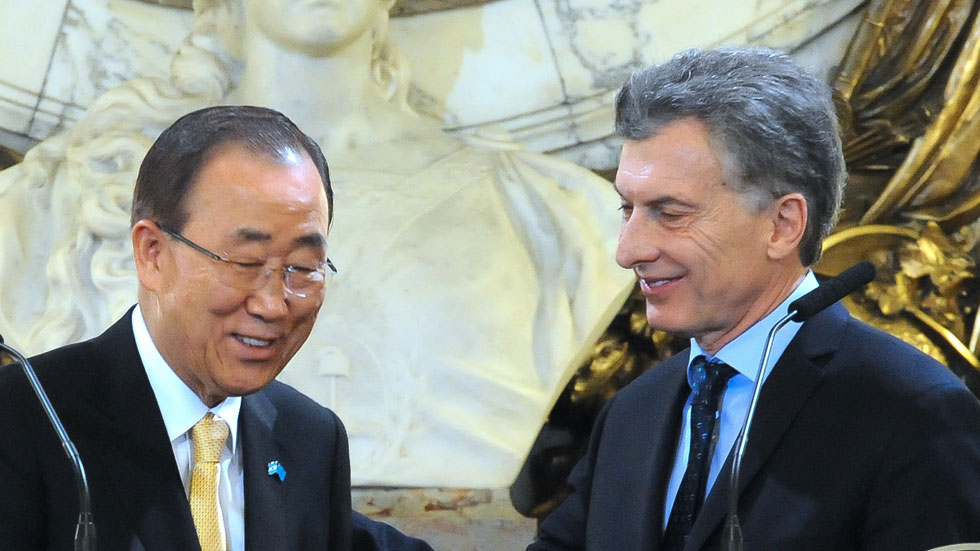 The Secretary General of the United Nations, Ban Ki-Moon has called on Argentina to provide more observers for Colombia’s pending peace process with leftist FARC rebels.

The Secretary General met with Argentine President Mauricio Macri at the Pink House in Buenos Aires during an event organized by the Argentinian Council of International Relations.

Argentina provided the UN with the general who will be the chief observer of the FARC’s demobilization and disarmament, and a number of troops that will provide security in areas where the FARC are set to demobilize.

The UN chief further said he would like to see an increased number of female military observers from Argentina involved in the peace process, up from the already delegated 75.

“We have very few women observers, we need women’s contribution in this monitoring process,” Ban said, according to the Buenos Aires Herald newspaper.

For his part, Macri confirmed Argentina’s commitment to the peace process and was thankful that Ban-Ki had recognized and acknowledges the country’s efforts.

“We are hoping for further inclusion, not just with demining but also being involved in the reintegration process and especially in any agriculture or livestock programs,” the president added.

Ban recently praised the signing of the bilateral ceasefire between the FARC and the Colombian government in Cuba, highlighting the quality of work done by the negotiating teams.

The Colombian peace talks has been going on for the last four years and is soon to be finished with a final signing of the peace deal by the administration of President Juan Manuel Santos and the FARC.

This is not without controversy as many of the Colombian public doubt the legitimacy of the FARC or the peace talks’ ability to effectively bring peace to the country ridden with internal conflict for more than half a century.