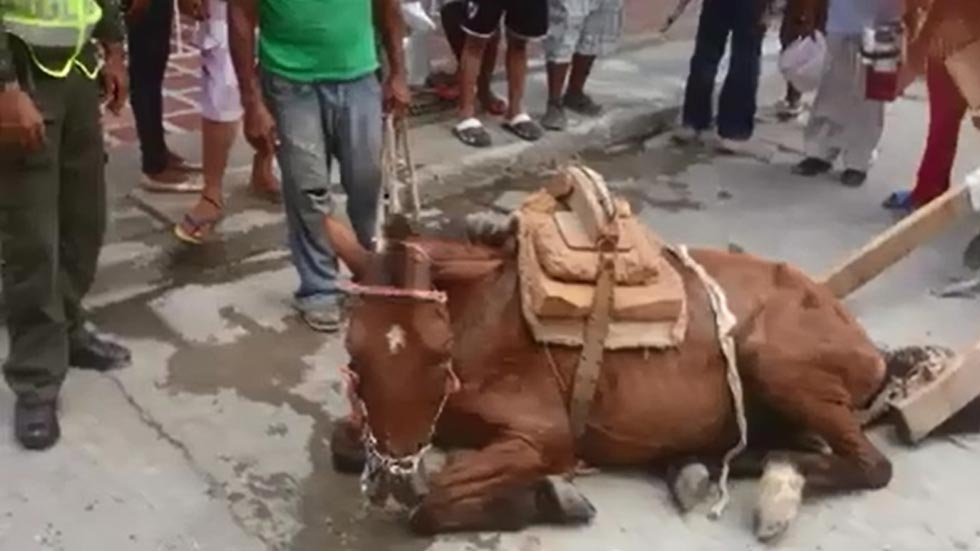 Traditional horse carriage rides in Cartagena are due to face more protests following a spate of horse falls throughout the city.

The traditional Spanish-style tours on horse-drawn carriages have come under scrutiny in the wake of the collapses of six horses this year, with animal rights activists campaigning to shut down the popular tourist attraction. The horse-drawn carriages are emblematic of Cartagena,the Caribbean city that was added to the UNESCO World Heritage List in 1984.

In less than one week, a horse suffered a heart attack and died in the middle of Bocagrande avenue, one of the main areas frequented by visitors, and another collapsed while drawing a carriage with passengers .

These are just more chapters in the long saga that has been a terrible year for the horses of Cartagena. On the 21st of April in Cartagena de Indias a horse collapsed while pulling a carriage with four tourists which resulted in the driver being attacked by an angry public.

These and other events have caused arguments on the streets and social networks among animal rights activists and coachmen. The citizens of Cartagena have held demonstrations to actively pursue a ban and criticize the authorities for not controlling the activity.

According to a petition organised by local resident, Viviana Garcia, “Some horses are so malnourished that their bones protrude and they are forced to work when injured or sick. After the exhausting work they are unable to rest as they are confined to filthy and unlicensed stables plagued by insects attracted to their feces and urine. Some have no horseshoes or have defective ones that cause them great pain.”

Horse-drawn carriage tours in Cartagena are exempt from the presidential decree that ordered a substitution of animal carriages implemented in several Colombian cities. Unfortunately these carriages are often overloaded by tourists.

“The horses do not have proper shelter, they do not get appropriate food and the handlers do not treat them well,” animal rights activist Fany Pachon told EFE, adding that the horses were forced to work long hours and live in “less than humane conditions.”

Cartagena, considered the main tourist destination in Colombia, has about 60 horse-drawn carriages providing tours of at least one hour around the colonial district.

The carriage operators, most of them from the Chambacu neighborhood, keep their horses in makeshift stalls within the city limits, Pachon said.

“Those are Iberian traditions that are not part of our Cartagena character,” Pachon said, adding that carriage operators “justify” the harsh treatment of the animals by saying it is the way things are done in Bolivar province, where Cartagena is located.

“Horses are living beings like humans, and we can all make mistakes,” said the President of the Association of Coachmen, Julio Martinez. He also said that the falls were “accidents” and denied the existence of bad practices. “To ban this tradition which supports entire families of coachmen is not the solution,” said Martinez.

“98% of the drivers are committed to improving the care and condition of the animals and comply with the expectations,” said Martinez, who said he closely monitors the horses. Veterinarians of the Municipal Assistance and Agriculture Unit are responsible for reporting the status of the horses and perform tests on the carriages to check the minimum weight of 350 kilos and height of 1.45 meters are adhered to.

“We both have the same goal, the welfare of the animals” said Martinez, who bragged that leaders like Nelson Mandela, Yasser Arafat and Fidel Castro paraded around town in the carriages when they visited the city.