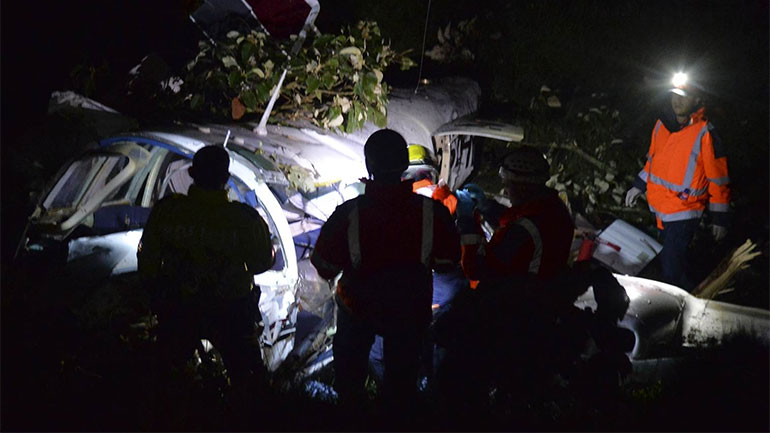 A small plane assigned to the crew of a movie starring Tom Cruise crashed in the Colombian Andes Friday, killing two people, including a Los Angeles-based film pilot, and seriously injuring a third, the country’s civilian aviation authority said.

An official with the aviation agency, who spoke on condition of anonymity because he was not authorized to discuss the matter, said Cruise was not on the aircraft.

The official said an American, Alan Purwin, was killed along with the Colombian Carlos Berl. A third person aboard, Jimmy Lee Garland, a pilot from Georgia, was rushed to a hospital in Medellin, and was in intensive care.

The official said the twin-engine plane ran into bad weather late Friday afternoon after taking off from the colonial town of Santa Fe de Antioquia for a short flight to Medellin. No emergency was reported to air traffic controllers.

The Piper Aerostar-600, with tail number N164HH, appears to be the same aircraft that Cruise, a trained pilot, was photographed exiting the cockpit from upon his arrival in Medellin on Aug. 20 to start work on his new film.

Garland’s son, Evan, told NBC News that his father is in critical condition, but is “doing fine … he is still alive and doing well.” He planned to travel to Colombia with his mother to be by Garland’s bedside.

Garland, the sole survivor, is a flight instructor and manager of a regional airport in Georgia’s Cherokee County, near Atlanta. He was looped in on the filming project in Colombia because some of the scenes were being filmed at the airport where he’s from.

Evan Garland said this was the first time that his father had worked with the other pilot, Purwin, who died in the accident, and it was also his first time in Colombia. He had been on the ground for about a month prior to the accident, working on the Cruise project.

Called “Mena,” the film stars Cruise as American pilot Barry Seal, a drug runner recruited by the CIA to try and capture the late cocaine kingpin Pablo Escobar. Seal was shot and killed in 1986 in Baton Rouge, Louisiana, allegedly by assassins sent by Escobar’s Medellin cartel.

Cruise’s spokeswoman, Amanda Lundberg, had no comment on Friday’s accident.

Purwin was founder and president of the Los Angeles-based Helinet Technologies, a company providing aerial surveillance technology to law enforcement. On the company’s website, he’s described as “one of the top film pilots of his generation” with a list of credits from television and major Hollywood movies such as “Transformers,” “Pearl Harbor,” and “Pirates of the Caribbean.”

He sat at the controls of a helicopter for the first time at age 16 and two years later took his first flying job crop dusting in Indiana, according to Helinet’s website.

In a statement, Helinet remembered him as a “pioneer in the film industry and committed philanthropist.”

The company said his legacy includes conducting the first vital organ transplant mission in Los Angeles, supporting the first response rescue efforts in the wake of Hurricane Katrina and being the only American Hollywood movie pilot to fly throughout China.

“There are no words that can express our heartache for we have lost one of the world’s greatest helicopter pilots and one of aviation’s greatest leaders,” Helinet added.