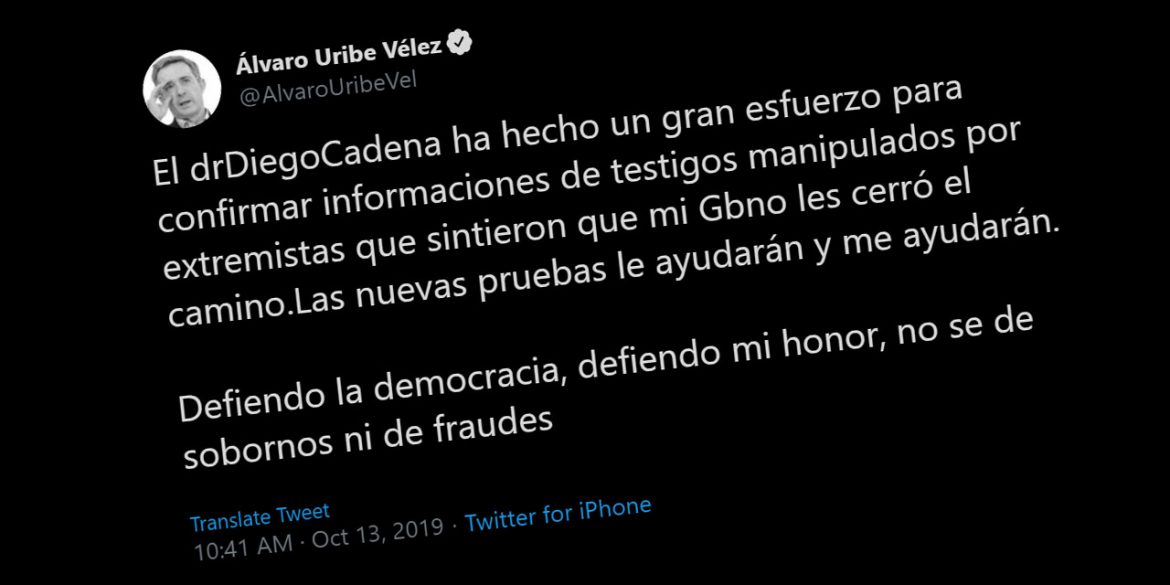 The state of Colombia vs Alvaro Uribe | Part 2: the disinformation offensive

Colombia’s former president Alvaro Uribe has begun a political offensive while his attorneys prepare the legal defense against fraud and bribery charges filed by the Supreme Court.

The legal defense strategy seeks not just to quash the fraud and bribery charges, but also to prevent the accumulation of evidence that could be used to sustain more serious accusations made against the former president.

The political offensive seeks to discredit the judiciary and the witnesses who got him in court in the first place using classic disinformation tactics borrowed from the nazis, the KGB and more recently US President Donald Trump.

The reversal of truth tactic was initially invented by the Nazis and later modernized by the KGB. This tactic basically seeks to neutralize an accusation by reversing it.

The Russian government used this tactic following the 2018 poisoning of former Russian military officer Sergei Skripal and his daughter in Salisbury, England.

After the British government accused Moscow of being behind the assassination attempt, Russia’s Foreign Minister Sergei Lavrov claimed that “experts tell us that it may well be beneficial to the British special services, who are known for their ability to act with a  license to kill.”

Uribe has been using this tactic throughout his career, but with mixed success. His false witness tampering charges against opposition Senator Ivan Cepeda, for example, backfired and are what landed him in court on fraud and bribery charges.

Nevertheless, Uribe claimed on Sunday that his fixer, mafia lawyer Diego Cadena, “did a great job  confirming  information about manipulated witnesses by extremists.”

The Supreme Court dismissed the witness manipulation claims in February last year already. Cadena has admitted to paying witnesses and left Colombia a day after the acting Prosecutor General’s Office hinted he could be arrested.

But the truth is irrelevant when it comes to manipulating public opinion, Adolph Hitler figured out in 1925 already. Almost 2,000 people retweeted Uribe’s latest attempt to reverse the truth on Sunday.

What is currently known as “fake news” is a decades-old tactic that was called “false news” by the CIA’s operations director Richard Helms in 1961 in a report on disinformation tactics employed by their soviet counterpart, the KGB.

Most of these operations played on the existing anti-American biases. The disinformation message was kind of wrapped in truthful information so that it would more easily accepted.

In Colombia, this tactic has been used at least since the 1930s when conservative newspaper El Colombiano reported that “the persecution of the Catholic Faith has begun.”

In this case, the newspaper used a congressional debate about the separation of church and state that was promoted by the Liberal Party to fabricate a non-existent religious persecution.

Uribe and his closest allies have access to a number of false websites and social media accounts that use pre-existing biases and ignorance to spin false news stories.

Far-right website “Los Irreverentes,” for example, reported on Thursday that “Uribe is investigated by his enemies” in an attempt to turn a judicial investigation into a political trial.

In the article, the anonymous author made unsubstantiated claims that the presiding judge in the Uribe case, Cesar Augusto Reyes, is tied to Cepeda, the victim of Uribe’s alleged fraud practices.

It is possible that speculations are true that the substantive magistrate, Cesar Reyes, is close to Pilar Rueda, wife of the communist senator and ally of the FARC, Ivan Cepeda. But where there is no room for doubt is that Alvaro Uribe’s judges are his ideological opponents.

In this case, the website is using the communist conviction of Cepeda’s father, late Senator Manuel Cepeda, and the fact that the opposition senator’s wife works for the country’s war crimes tribunal, to fabricate the false news that” Uribe’s judges are his ideological opponents.”

Los Irreverentes’ attempt wasn’t very successful. The article was retweeted only 300 times and wasn’t picked up by news media.