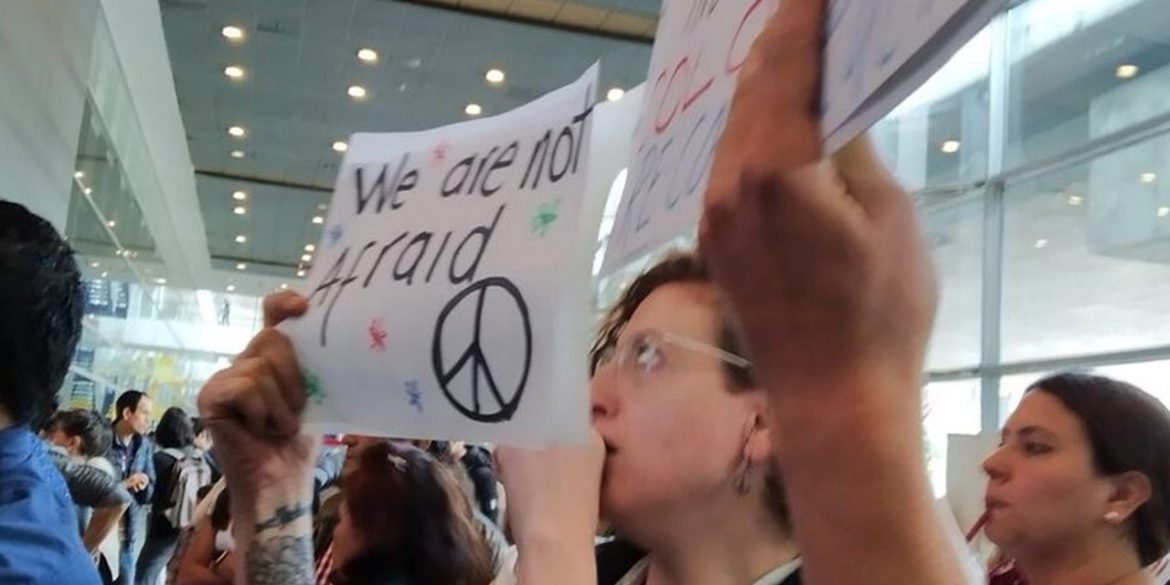 The apparently arbitrary arrest of peaceful protesters at Colombia’s international airport in the capital Bogota triggered a wave of indignation and calls to move mass protests to the airport.

The tensions are the consequence of what appears to be another overreaction of the police to peaceful protests not affecting public order.

According to video recordings of people who filmed the incident at El Dorado International Airport, police detained two protesters who were silently holding up signs at the international arrivals terminal.

Police then proceeded to detain at least four more people and confiscated their phones because “it was believed that they were students who were using these elements to share on social media,” according to Bogota’s deputy police commander General Ricardo Alarcon.

Holding up papers at airports and reporting is legal in Colombia, which would make the arrests and the confiscation of phones a violation of fundamental rights of law-abiding citizens.

Consequently, the latest repression of peaceful protests triggered mass rejections and claims that “Colombia is not a democracy” and that “freedom of expression has died.”

What is the crime for exposing our horrid justice and social devastation? Is it more dangerous to protest silently at El Dorado International Airport rather than steal billions from national treasury and make foul contracts with public resources? #PlantonEnElDorado #7DElParoSigue

Previous overreactions by the police in the capital have had adverse effects and triggered only larger numbers of people to mobilize in defense of their fundamental rights.

“Today we’ll all be going to El Dorado Airport,” one Twitter user said, but this was not immediately echoed by protest leaders who have tried to maintain the mass protests orderly.

When a large group of anti-government protesters tried to walk to the airport on the first day of more than two weeks of protests and strikes they were violently dispersed by anti-riot police unit ESMAD.

Since then and until Saturday, the massive protests in the capital have mainly been concentrated in the downtown area of Bogota.

The initially violent repression of the protests have sunk the approval rating of President Ivan Duque to 24%, according to Gallup. Some 75% of Colombians rejected the president’s response to the protests, according to pollster Yanhaas.