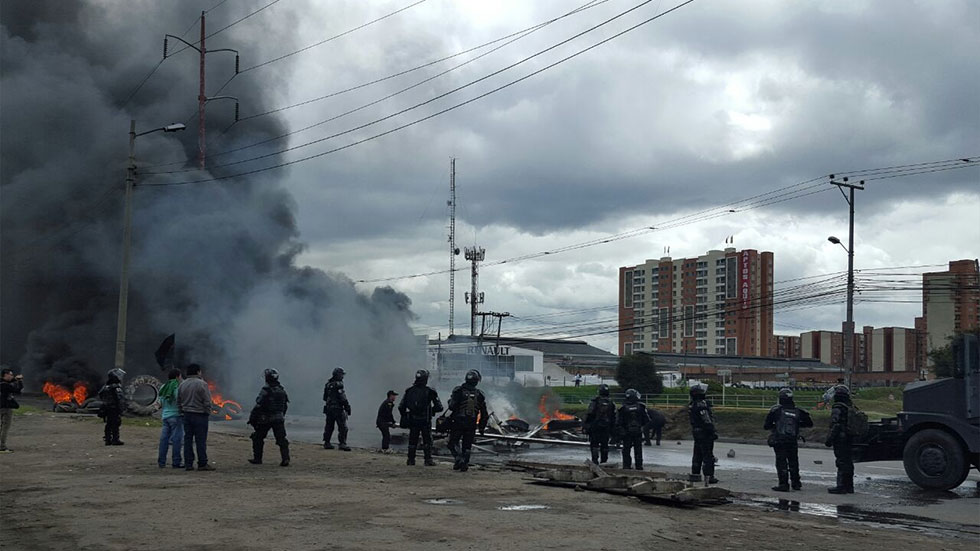 Truckers, in their sixth week of strikes, violently clashed with riot police in the capital Bogota on Wednesday.

The initially peaceful demonstration was heading towards the center of the city where at the time the government and military were carrying out ceremonies as part of the country’s Independence Day celebrations.

However, the situation turned violent when police from the ESMAD anti-riot unit blocked the truckers’ way and people began throwing rocks and bricks at the police.

While local authorities blamed the truckers of attacking the police, the Colombian Truckers Association urged the authorities to respect the right to demonstrate peacefully.

Bogota mayor Enrique Peñalosa said the truckers were denied permission to protest, while the city’s Government Secretary Daniel Mejia said minors were involved in the unrest.

The protesters burnt tires and riot police used tear gas in an attempt to disperse the crowd. One member of the city’s human rights office was injured.

So far, the truckers strike has mainly been taking place outside Colombia’s cities. The Bogota protest was unannounced and took the authorities by surprise.

Security forces were already on high alert after audio leaked on Tuesday in which alleged strike leaders and taxi union representatives were talking about blocking Bogota’s entry and exit routes.

However, the veracity of the recordings was never verified.

The truckers, demanding lower gas and toll prices, and protection measures for multinationals seeking to compete, have become increasingly frustrated about the lack of progress made at negotiations with the government.

A month after the strikes began, truckers stepped up their protests, began blocking roads and prevented non-striking truckers from doing their work.

Clashes that followed the road blocks left one person dead.

The government has since organized police escorts for transport caravans to secure that those truckers who do want to work can do so.

At the same time, authorities have accused some of the strike’s leaders of unrelated criminal activity.

However, with tens of thousands of truckers parking their cars alongside the country’s highways, food distribution has become increasingly difficult and basic food prices in most Colombia’s cities have skyrocketed since the strike began.

Talks between the truckers and the government, however, seem to be as stuck as when the strike began in early June.