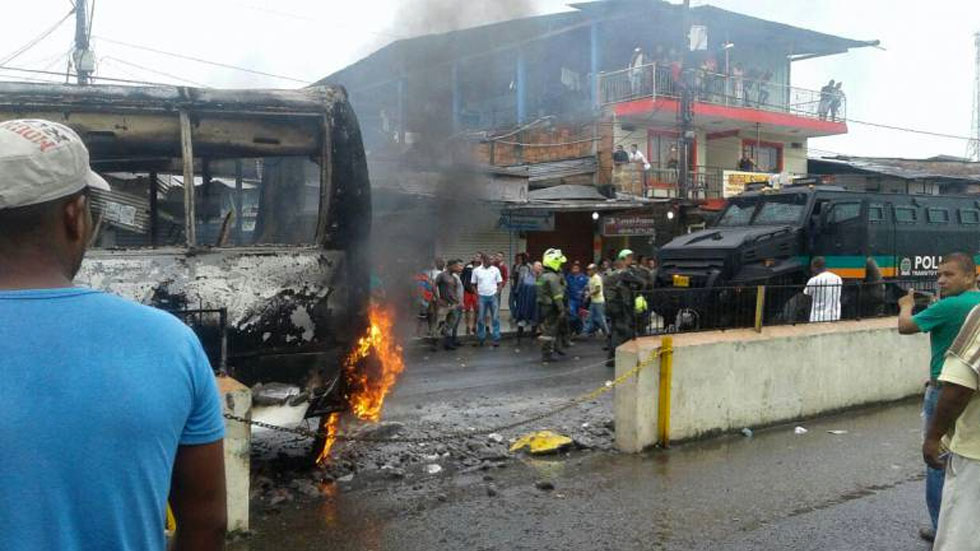 Local authorities are “overwhelmed” by the chaos and violence that submerged the southwest of Colombia following the demobilization of Marxist FARC guerrillas, the governor of Nariño said Tuesday.

Nariño is the home of Tumaco, a port town that also has the most hectares of coca in Colombia.

Since the demobilization of FARC guerrillas, who effectively controlled the area, in January, the town has been overwhelmed by a culmination of protests, road blocks and all kinds of violence.

The army’s inability to control the area has led to tensions between drug trafficking groups who are now violently vying over control of the strategic area.

According to Caracol Radio, 51 people have been murdered so far this year.

This piece of territory has major potential and I want to stress the strategic value of Tumaco. It hurts my patriotic heart that the Colombian state never understood this, but organized crime does. There is no excuse for this.

At the same time, coca farmers have been blocking roads and protesting over forced coca eradication efforts after they had been promised a voluntary transition to substitute crops by the national government.

“We have been warning the national government since mid February about what is going on. This is the municipality with most coca and that generates conflict.

Conflict analyst Ariel Avila told newspaper El Pais that the ongoing protests in Tumaco are the result of a kind of “criminal anarchy” that emerged when the FARC abandoned the area and the military failed to enter.

Additionally, the newspaper reported that the government has made an agreement over coca crop substitution with some 14,000 farming families while in total 23,000 families in just that one municipality depend on coca for their livelihood.

The removal of their coca means guaranteed hunger for many of these families as the region’s lack of basic road infrastructure doesn’t allow them to bring any produce to the market but coca.

To further complicate the matter, at least five drug traffickers own coca plots as large as 200 hectares that used to be protected by the FARC, according to Avila.

These professional narcos, in some cases linked to paramilitary groups or transnational drug trafficking organizations, are paying locals a little less than $10 basically to create chaos and frustrate the government’s efforts to assume territorial control.

The problematic situation overpowers the capacity of the municipal and provincial authorities. What is at stake is not just a roadblock and the protest of some people, but the implementation of peace with the FARC and the prevention of a new war.

The governor has asked President Juan Manuel Santos to visit the town in an attempt to receive the national attention needed to confront the explosive situation in the southwest of Colombia.