Following revelations of alleged sexual harassment in Colombia’s Senate, the secretary suspected of the abuse on Thursday heard he also has to respond for allegedly threatening the journalist who revealed the scandal.

Jesus Maria España, the secretary of the Senate’s Seventh Committee got into trouble earlier this week when a former colleague told radio station La FM that the committee secretary had touched her, and had sent had sent improper text messages and emails.

The colleague, who didn’t see her temporary labor contract renewed after turning down the alleged avances, said España had been abusive towards other women working in Congress. 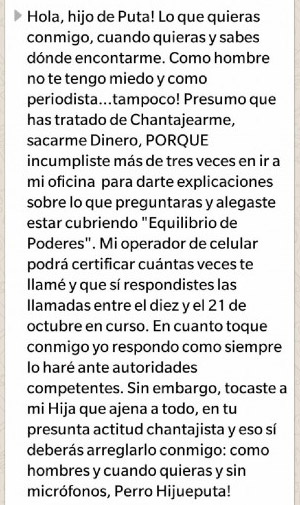 As if that were not enough trouble for the administrative executive, España took his frustration out on the journalist who had made the complaints and subsequent investigations public.

“Hello, son of a bitch,” España wrote the journalist in a text message, “Whatever you want with me, whenever you want it. You know where to find me.”

“You involved my daughter who has nothing to do with this … and this you will have to sort out with me: As men, whenever you want and without microphones, fucking son of a bitch,” the administrative executive said.

The daughter, in fact, has a lot to do with España’s problems as her appointment as a lobbyist for the Superintendent for Health has raised questions about alleged influence-peddling by her father.

Eljach said he supported a disciplinary investigation into the alleged sexual intimidation and the abusive language used as España “also has the right to clear his good name.”

According to La FM, España has been accused of a series of alleged irregularities and crimes before the Inspector General’s Office and the Senate’s administrative director, but not one of the institutions that received the complaints have opened an investigation.