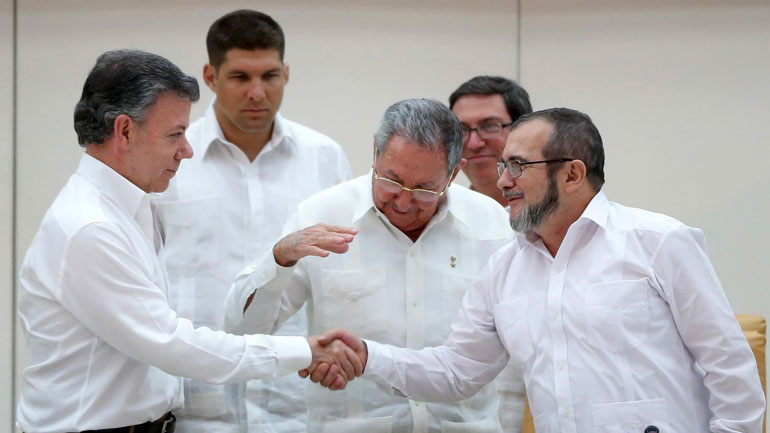 Colombian President Juan Manuel Santos said on Wednesday that he agreed to work towards a bilateral ceasefire with FARC rebels that should take force on January 1.

According to the president, the bilateral ceasefire would be “like a Christmas and New Year’s gift to Colombians.”

The FARC and the Santos administration have been negotiating and end to more than 50 years of conflict since November 2012, but have so far failed to agree to a formal bilateral ceasefire.

To support the talks, the FARC is upholding a unilateral ceasefire while the military has reduced its military activity targeting FARC units to virtually zero.

After already having agreed to formally end the armed conflict before March 23 next year, Santos publicly let FARC leader “Timochenko” know that he is willing to agree to a bilateral ceasefire as requested by the rebels for years.

“Let’s make the effort to, between now and December 31, we can for example finish point five [on the peace talks agenda,] End of Conflict, and through that decree a bilateral and verifiable ceasefire starting January first,” said Santos.

The FARC has been fighting the Colombian state since 1964 in a conflict that has killed more than 265,000 Colombians and displaced more than 6 million.

The peace talks that are close to celebrating their third anniversary have so far progressed without a bilateral ceasefire amid popular distrust that the guerrillas could use the absence of military pressure to regroup.

However, following months of bilateral attempts to deescalate the armed conflict for the duration of the talks, the government has ceded to calls by both the guerrillas and the international community to work towards a bilateral ceasefire that would in effect end the armed conflict before its 52nd year.