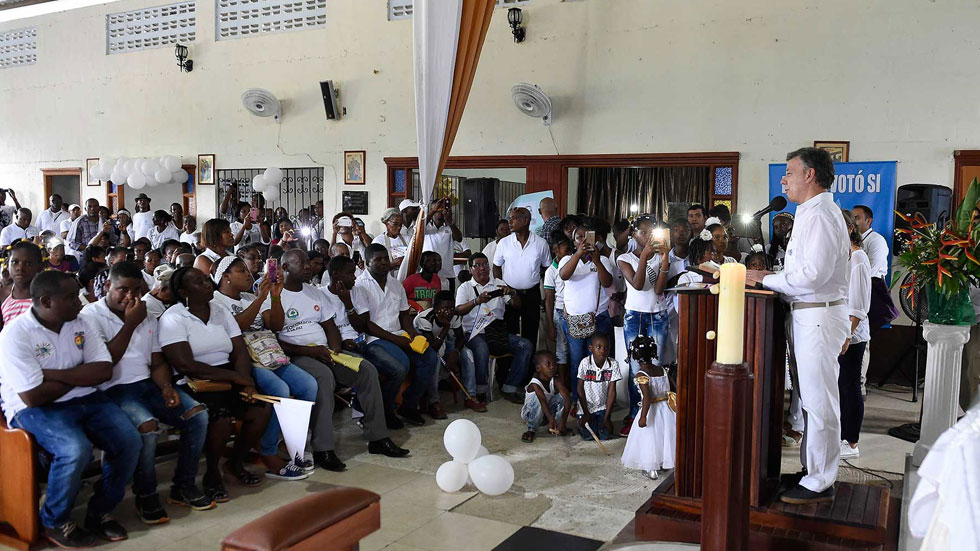 Colombia President Juan Manuel Santos on Sunday vowed to donate the money he will receive with his Nobel Peace Prize to victims of his country’s 52-year-long armed conflict.

Santos made the announcement while visiting Bojaya, a village in the west of Colombia that lost 79 people in 2002 when a FARC mortar hit the church where the town was hiding.

The president was awarded the Nobel Peace Prize for his successful efforts to negotiate peace with the FARC, the country’s largest, oldest and most-feared rebel group.

Notwithstanding, in a referendum in which Santos was opposed by former President Alvaro Uribe, a staunch opponent of the peace deal, the Colombia narrowly rejected the deal, disallowing the president to execute the accord.

The “No” vote was a major punch in the face of many victims and people living in war zones, the majority of whom voted in favor of peace and some had already begun a reconciliation process with their victimizers.

in Bojaya, which continues to be under threat by illegal armed groups, 96% of the population voted in favor of peace and expressed to be devastated by their fellow Colombians’ rejection of the peace deal.

In an attempt to support and reassured the war-torn community, Santos said he “wanted to come to share this with you, because you symbolize what this war in Colombia has done.”

“This Nobel prize isn’t mine. This Nobel is more than anything for the millions of victims throughout the national territory.”

The president is currently negotiating “adjustments and clarifications” with several sectors in society that predominantly voted against peace in an attempt to regain support and proceed with the peace process that was stopped in its tracks.