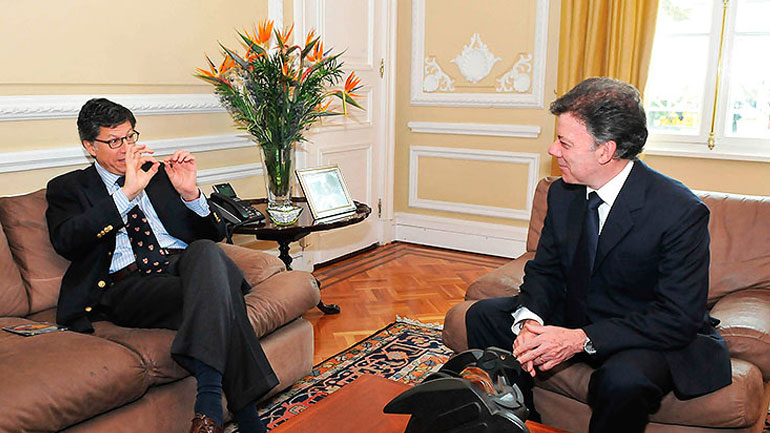 Colombian President Juan Manuel Santos met with Human Rights Watch on Wednesday after initially rejecting a report by the human rights group that accused the commanders of the Armed Forces and the National Army of being implicated in dozens of killings.

The HRW accused the commander of the Armed Forces, General Juan Pablo Rodriguez, and the Army, General Jaime Alfonso Lasprilla, of involvement in dozens of thousands of civilian killings that took place between 2002 and 2008.

Before meeting with HRW Americas director Jose Miguel Vivanco, Santos bashed the report during a speech at a military batallion.

“Don’t you come and tarnish this institution,” Santos said pugnaciously after he “heard that an NGO accused [the top commanders] without any physical evidence.”

Santos further said that he would defend the “legitimacy” and “reputation” of the two commanders.  “The Prosecutor and Advocate General can demonstrate that there has not been a single investigation against [the two commanders]”, Santos added, confirming HRW’s conclusion that both commanders were escaping prosecution for war crimes.

However, once away from the cameras and inside the presidential palace in the capital Bogota, Santos met with Vivanco and his tone allegedly changed.

Santos, who was defense minister when the scandal involving the systematic killing of thousands of civilians became public, “proved to be very receptive and we had the opportunity to have a conversation I would say was very respectful and, moreover, focused on the evidence, the cases and the data were were able to inform him of,” Vivanco told press afterwards.

“The president again reiterated his commitment [to investigate the killings], because these are issues that will be investigated by the Prosecutor General’s Office,” Vivanco said.

The HRW report showed that more than 800 soldiers have been convicted for such killings, mostly low-ranking members. It additionally provided evidence that dozens of these killings had taken place under the watch of the men who are now the top commanders of the Armed Forces and the National Army.

According to Human Rights Watch, the two commanders either knew or should have known the killings were taking place.

While 22 generals are currently being investigated for their involvement in the scandal, Rodriguez and Lasprilla face no investigation.

However, former National Army commander Mario Montoya was called in for questioning, but has not been charged in spite of numerous accusations of human rights violations and ties to paramilitary groups.

In fact, zero charges have been filed against any of the Colombian military’s brigade commanders or anyone else higher up the chain of command, in spite the fact that the more than 3,000 homicides between 2002 and 2008 were carried out across the country by numerous battalions.

Commanders of Colombia’s ‘battalion of death’ arrested for killing 72