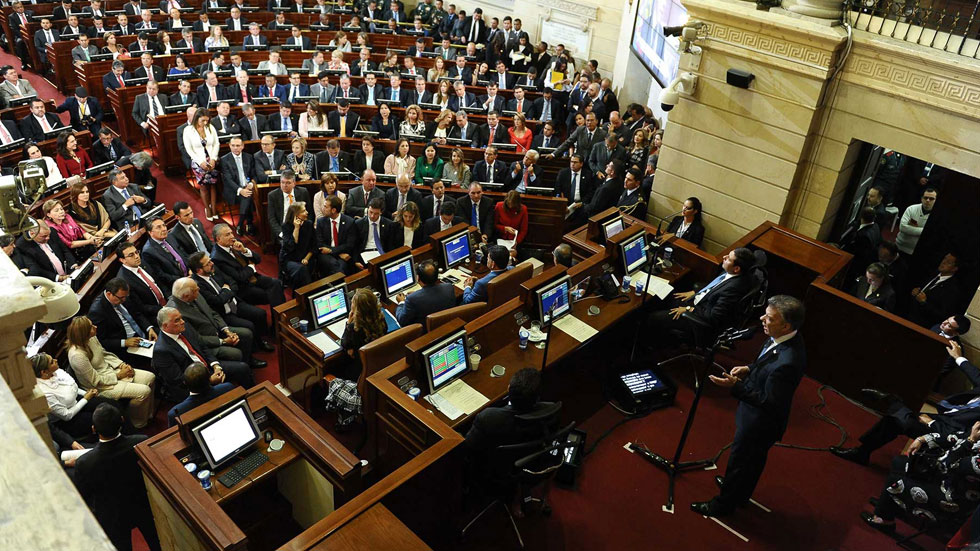 Santos calls for unity as a divided Colombia grapples with peace process, elections and corruption

President Juan Manuel Santos called for unity among Colombians on Thursday, the day their Congress formally inaugurated the last, and possibly most divisive year before elections.

Santos made the call after a peace deal between the country’s formerly largest rebel group FARC that has divided public opinion, while uniting Colombians in the rejection of their president and his policies.

“Forget about me. Forget — if that makes some feel better — that these achievements were made during the years of this government,” Santos told Congress.

What is at stake before the nation and the international community, when talking about complying to the peace deal, is not my reputation or the government’s commitment. What is at stake is the international responsibility of the State. For the international community, the state is not divided into compartments. The State is one, the policy of peace is one. That is why fulfilling the peace agreement in all its parts is a responsibility. It is a moral, political and legal obligation that we assume before the whole world, and in particular, to its highest authority, which is the United Nations Security Council.

The United Nations Security Council last month unanimously agreed to extend its mandate in Colombia in an attempt to secure the implementation of the historic peace deal.

While internationally broadly supported, the deal has polarized public opinion in Colombia, where the promised dividend of the peace deal that followed more than half a century of armed conflict has yet to become evident for many.

Additionally, the armed conflict has been fiercely opposed by Santos’ predecessor, former President Alvaro Uribe, who can still count on the support of a significant and vocal minority of Colombia’s electorate.

Uribe’s political party, the hard-right Democratic Center Party, has gone as far as promising it would “shred the fucking deal to pieces.”

All other political parties have formally supported the ongoing peace process, but have been discredited after a flurry of corruption scandals.

With a transitional justice system and elections expected within a year, Santos’ last year in office could be his most challenging as both could further divide public opinion in the war-torn country.