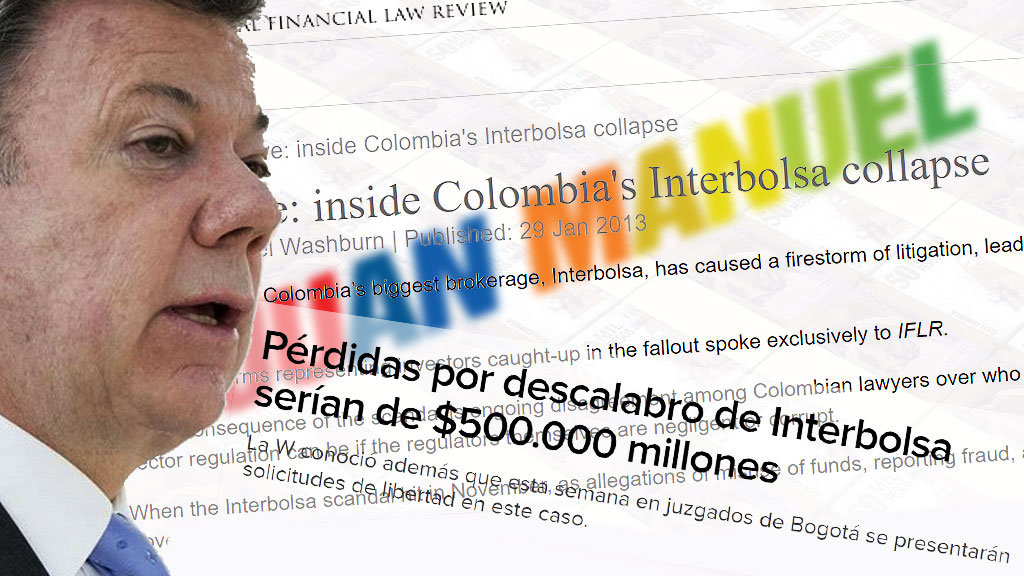 The 2010 campaign of Colombia President Juan Manuel Santos, already investigated for receiving illegal funds from bribery-stained multinational Odebrecht, also received funds from an investment company that embezzled hundreds of millions of dollars, according to the company’s imprisoned former director.

The former investment banker was sentenced to seven years in prison in August 2015 after his company for years had embezzled hundreds of million from funds of tens of thousands of investors.

InterBolsa was liquidated in 2012. It’s directors were not formally charged until February this year. In 2010, the public had no idea of the mass embezzlement.

Colombia’s once most celebrated businessman arrested

The Interbolsa allegations arrive just two days after Santos was forced to acknowledge that his 2010 campaign had received funding from Brazilian company Odebrecht.

The admitted illegal receiving and spending of the money by then-campaign manager Roberto Prieto spurred a formal investigation against the president earlier this week.

Jamarillo sent a letter to the Colombian Prosecutor General, Nestor Humberto Martinez, informing him that he has information concerning contributions InterBolsa made to the Santos campaign.

According to Jaramillo, conversations took place between InterBolsa executives and Prieto in the InterBolsa offices in the north of Bogota.

“The specific claim made by Mr. Prieto was to seek additional economic funds to cover a campaign deficit that had resulted from advertising expenses.”

Jaramillo added that he agreed to help and instructed Jorge Arabia Watemberg, former financial vice president of InterBolsa, who was also in attendance at the meeting, to coordinate the approximately $ 150,000 transaction with Mr. Prieto.

However, Watemberg on Thursday denied even knowing Prieto, and denying he attended the meeting or ordered the payment

“I did not give any weight to any campaign, I do not know Roberto Prieto and I have never met him. The aim of this is to undermine my credibility. Rodrigo Jaramillo show me proof of my approval and signature. It’s lies,” Watemberg told newspaper El Espectador.

Roberto Prieto has also denied claims of InterBolsa’s contribution to the Santos campaign in 2010, saying that he has never met any of the people mentioned.

In the letter to the Prosecutor General, Jaramillo added that he had also given a personal contribution of $80 million to the Santos campaign but that had been officially recorded on campaign records with National Electoral Council (CNE), the authority investigating the admitted illegal funding.

InterBolsa collapsed after the firm lost over 20,000 investors an estimated $500 million in 2012. At its height, the company was the largest brokerage firm in Colombia. However Colombia’s government liquified the company after defaulting on $11 million dollar loan.

Jamarillo is currently under house arrest for his role in the fraud and money laundering that emerged following the collapse of InterBolsa.

He has made himself fully available to the Prosecutor General’s Office in case a full investigation is deemed necessary, guaranteeing full cooperation.

This is the latest twist in the corruption scandal surrounding the Santos 2010 campaign after Colombia’s electoral authority CNE announced on Thursday it had opened a formal investigated into illegal funding of the campaign by Brazilian engineering firm Odebrecht.

Santos on Tuesday acknowledged that his 2010 presidential campaign received “irregular funding” from Brazilian company Odebrecht but moved to dispel suggestions that he was aware it had happened.

Former Santos’ campaign manager claimed in an earlier interview with BluRadio that Odebrecht had financed the purchase of posters for the campaign.

The financing allegedly amounted to the provision of  $400,000 to a vendor to print 2 million campaign posters during the campaign.

The uncovered corruption linked to Odebrecht includes an alleged $11.1 million in bribes in Colombia so far has created a political crisis incriminating politicians from both the centrist coalition, but also that of the conservative opposition led by Santos political arch-rival, former President Alvaro Uribe.