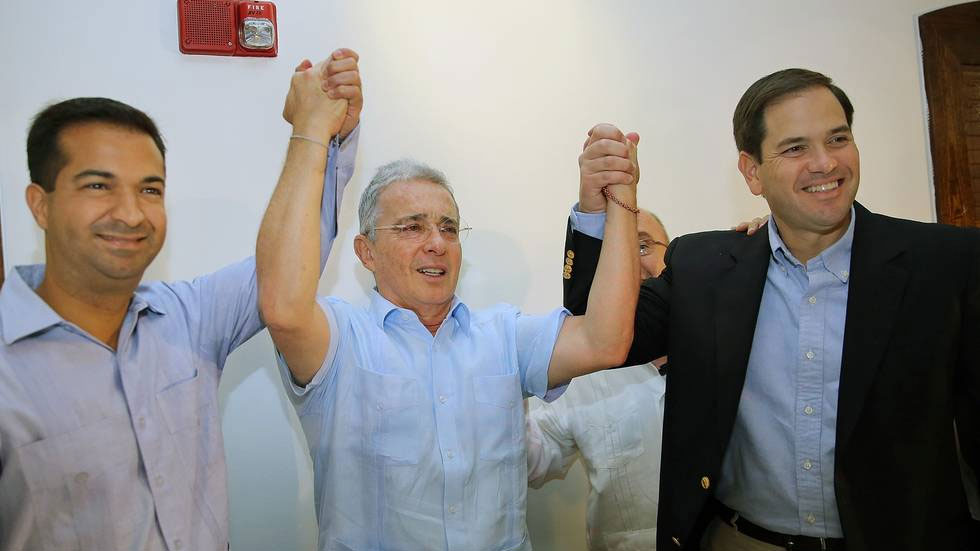 US Senator Marco Rubio (R-FL) on Sunday flatly denied having anything to do with a now infamous secret-meeting-that-wasn’t-really-a-meeting-or-even-secret between President Donald Trump and two former Colombian presidents.

Former President Andres Pastrana (1998-2002), a staunch opponent of a peace process including Marxist FARC rebels, had said on Twitter he had had a “cordial and frank conversation about the problems and perspectives of Colombia and the region” at Trump’s Mar-O-Lago resort in Florida, a claim later denied by eye witnesses and ultimately the White House.

Former President Alvaro Uribe (2002-2010), the most vociferous opponent of Colombia’s peace process, then confirmed he had also been invited to the Mar-O-Lago resort “at the invitation of a third party,” but at no point confirmed having met with Trump.

Rubio is one of Uribe’s main allies in US Congress and a critic of Colombia’s peace process, raising questions in the media if he was the one that had set up the encounter that, according to the White House, consisted of a brief greeting and a handshake.

Colombia’s ex-presidents did not have meeting with Trump at all: CNN

The senator, after dismissing Pastrana’s claim there was a substantive meeting, did go out of his way to express his own concerns about the treaty. As chairman of the Western Hemisphere subcommittee of the Senate Foreign Relations Committee, Rubio can influence the scope of US aid for the peace process.

In an interview aired on Miami television Sunday, Mario explicitly distanced himself from Pastrana’s now-debunked tweet.

I’m a big fan of President Uribe, but I didn’t even know he was in Florida.

Making a US elephant out of a Colombian mosquito

The Colombian press had been in turmoil for ten days after Pastrana boasted about the allegedly secret meeting he and Uribe had with Trump at the US president’s Florida retreat, Mar-a-Lago.

US press jumped on the story later in the week, with headlines such as in the Los Angeles Times: “Is Trump’s secret meeting with Colombian ex-presidents meant to undercut peace deal?”

The meeting supposedly was “secret” because it was never formally announced and never appeared on Trump’s schedule.

The now-debunked allegation of a substantial meeting between the US president and Colombia’s top peace process opponents caused major turmoil in Colombia because it appeared that Pastrana and Uribe had managed to gain access to Trump weeks ahead of a planned meeting for current President Juan Manuel Santos.

The alleged lobbying of the war-crimes-stained opposition was seen as both a major US snub of Santos and a win for critics of the treaty who want the US to back off its support.

However, Trump spokeswoman Sarah Huckabee Sanders finally put the matter in proper perspective by acknowledging that while Uribe and Pastrana were at Mar-a-Lago as guests of a club member, they only  “briefly said hello when the president [Trump] walked past them. There wasn’t anything beyond a quick hello.”

No US money will go to the FARC: Rubio

Nevertheless, the affair underscored how nervous and on-edge are the Santos administration and other supporters of the peace process. Former President Barack Obama had pledged $450 million in US aid for the peace process but the Republicans now in power have backed away from endorsing that view.

The peace process is in trouble enough on its own without the severe blow that US withdrawal from it would mean.

For his part, even though Rubio distanced himself from Pastrana’s claim, he went on in the interview to express deep concerns about the treaty.

“We’re not going to spend any of our money supporting the FARC,” Rubio told the CBS station in Miami.

I’m not in favor of our money going towards creating these criminal courts where Colombians, who were out there pursuing the drug war alongside the United States, are now being put on trial for having worked with us to wipe out these criminal elements.

“We’re not going to accept these FARC terrorists who have committed crimes and killed and harmed Americans traveling to the United States on diplomatic visas because they got some seat in the [Colombian] Congress,” Rubio said, referring to the temporary legislative slots for the FARC promised by the treaty.

The peace process in Colombia can count on severe social resistance, particularly from both the country’s conservative constituency and many members of rural elites, who have long been terrorized by the Marxist guerrillas.

Additionally, Uribe and many of his allies in the private sector, politics and the military resist the peace deal because of the possible legal consequences that have many, including the former president and his brother, embroiled in war crime allegations.