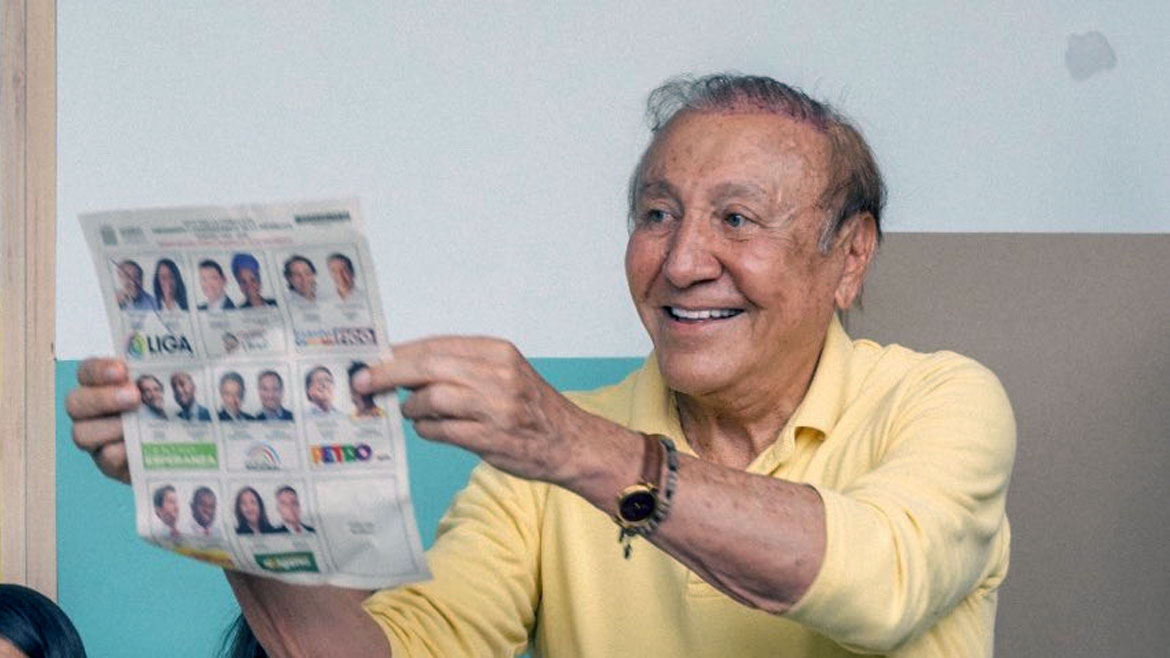 Presidential candidate Rodolfo Hernandez is a businessman and politician from the central Santander province.

The demagogue rose to prominence after his controversial term as mayor of Santander capital Bucaramanga.

Hernandez was born into a lower class family from the town of Piedecuesta in 1945 and began studying civil engineering at the National University in Bogota in the 1960’s.

According to the politician, Hernandez founded his construction company, Constructora HG, in 1972 after being granted his first housing project by the city hall of his hometown.

The politician subsequently became one of the leading government contractors for social housing projects in Santander and its capital Bucaramanga in particular.

Hernandez entered local politics in 1991 after being elected as a member of Piedecuesta’s city council. The businessman-turned-politician didn’t take office, however.

The suspension was the first of four that have marked the construction mogul’s political career.

After dedicating more than 15 years to construction, Hernandez began focusing on politics in Santander’s capital in 2011.

The construction mogul initially sponsored the campaign of Liberal Party politician Luis Francisco Bohorquez, who was mayor of Bucaramanga between 2012 and 2015.

Hernandez subsequently ran for mayor in the regional capital for the period between 2016 and 2019 with success.

The regional construction mogul’s return to politics was again marred by scandals.

The Inspector General’s Office gave Hernandez a three-month suspension in 2018 after the mayor assaulted a member of the council in November 2018.

The mayor was suspended again and resigned in September 2019 for allegedly meddling in the election of his successor.

The month before, the Inspector General’s Office accused Hernandez of abusing his position in 2016 for trying to push through a waste management contract with a company that allegedly promised his son a $2 million fee.

The Prosecutor General’s Office formally charged Hernandez and four other Bucaramanga officials over their alleged corruption in May 2021.

The businessman-turned-politician formally announced his candidacy in the 2022 presidential elections a month later.

Hernandez’s candidacy went relatively unnoticed until he surged in election polls in the month before the first round of the elections on May 29, 2022.

The candidate of the so-called “Anti-Corruption Leaders’ League” surprisingly came in second with 28% of the votes, which gave him a place in the June 19 run-off election with opposition Senator Gustavo Petro.

Ironically, the self-proclaimed anti-corruption candidate is expected to stand trial for on corruption charges immediately after the selections.