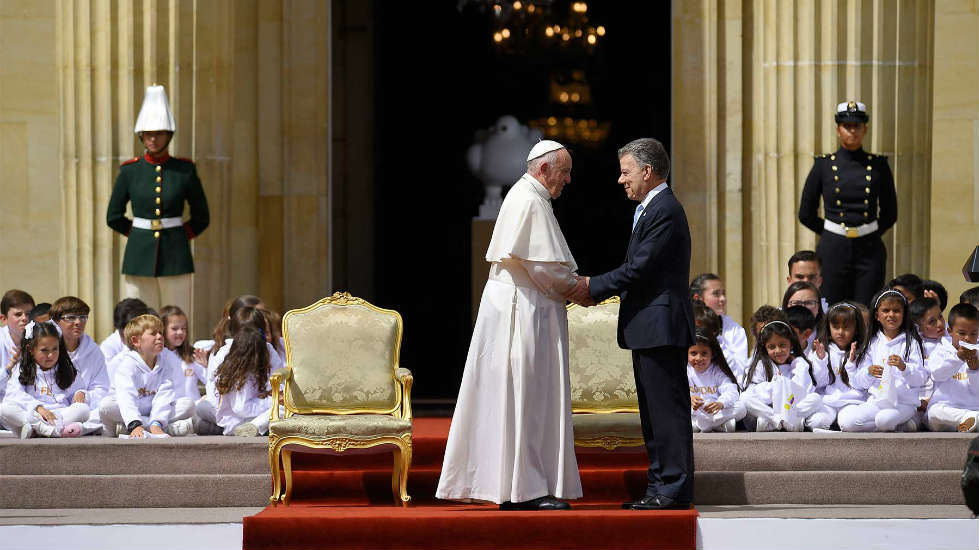 Pope calls for understanding in first formal speech in Colombia

Pope Francis called on Colombia to reject vengeance and personal interests, while embracing mutual understanding, during a visit to President Juan Manuel Santos.

The leader of the Catholic Church did so on his first full day of activities in the South American country where he will be supporting on ongoing peace process and plea for reconciliation in the war-torn country until Sunday.

May this effort make us flee from any temptation of revenge and pursuit of only particular and short-term interests. The more difficult the path that leads to peace and understanding, the more we must strive to recognize the other, to heal wounds and build bridges, to strengthen ties and help each other.

The night of his arrival, the pope had already called for reconciliation in Colombia, which is trying to overcome more than half a century of drug-fueled armed conflict.

A lot of time has been spent on hate and revenge. The solitude of being always in confrontation has already lasted decades and smells a hundred years. We do not want any kind of violence to restrict or annul even one more life. And I wanted to come here to tell them that you are not alone, many of us who want to accompany you in this step; this trip seeks to be an incentive for you, a contribution that in some way paves the way to reconciliation and peace.

Following his visit to the presidential palace, the pope went on to lead a service in the capital, the first of multiple set to be held in Bogota, Medellin, Cartagena and Villavicencio.

While trying to reconcile the country politically divided by decades of armed conflict, the church has insisted the visit has mainly religious purposes.