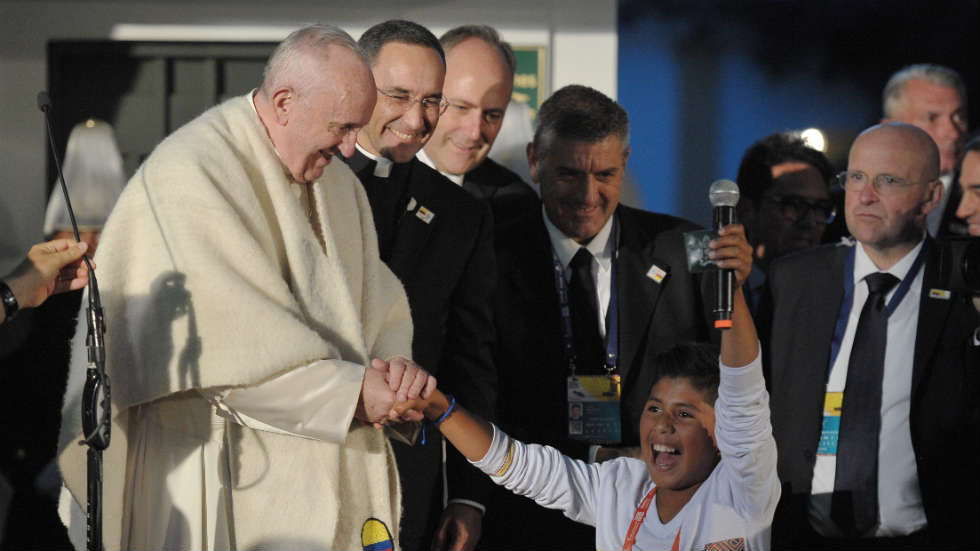 Pope calls on Colombia not to be misled and move forward

In his first short speech after arriving in Colombia, Pope Francis called on the people of the South American country to not be misled and move forward.

Following his arrival on the Catam military airbase, the pope traveled to the Apostolic Nunciature in the capital Bogota where he first met with minors who had previously taken part in the country’s armed conflict or drug trafficking.

The pope praised the former combatants and gang members for having abandoned violence to reintegrate into society.

Thank you for your happiness. Thank you for this path you have made yourself take. This is called heroism. Even the little ones, the youngest ones, can be heroes. Those who have been misled, who have make a mistake, they get up, are heroes and move forward.

The church leader subsequently called on the former child soldiers and juvenile delinquents to “not be misled” and continue efforts to reintegrate.

The church leader’s’five-day trip to Colombia is dominated by government and church attempts to promote peace and reconciliation after more than half a century of drug-fueled armed conflict that has left 8 million victims.

Pope calls on Colombia to reconcile after decades of war

While the country’s divided society is only slowly embracing the ongoing peace efforts with FARC and ELN guerrillas, and paramilitary group AGC, the church leader has used his religious authority to get the predominantly Catholic Colombians to rally behind the peace processes.

On Friday, Pope Francis will meet with victims of the armed conflict in the central Colombian city of Villavicencio.

Throughout his visit, the Catholic Church’s leader is expected to promote “reconciliation with the Lord and with our brothers, but also with the environment.”