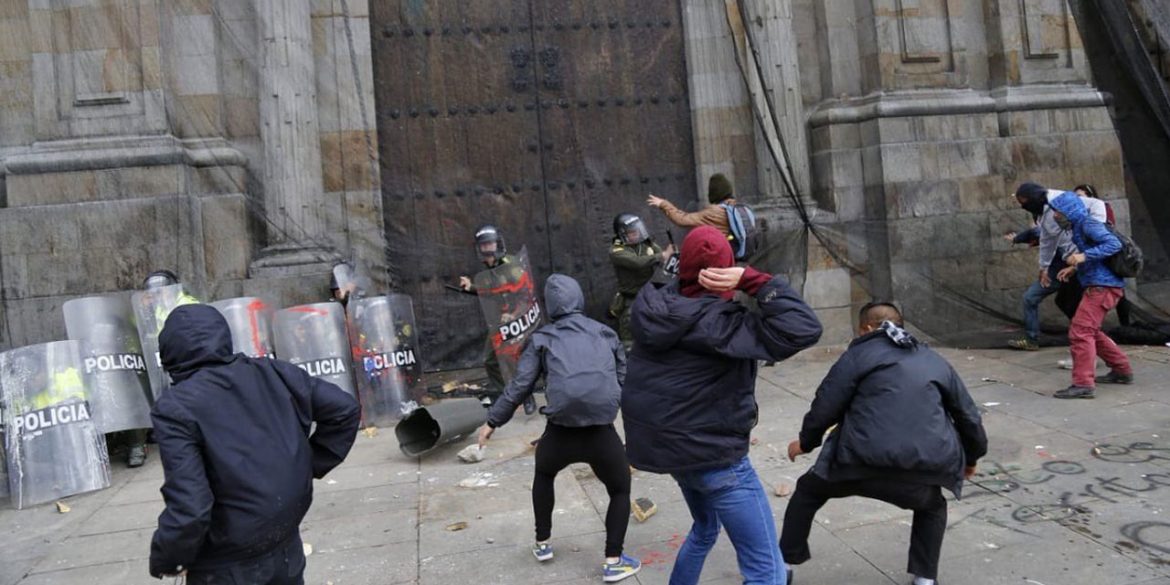 At least 11 people were injured, with three journalists attacked by police and 33 people arrested after anti-government protests in Bogota turned violent on Thursday.

The government and civilians disagree on how many people injured, and on why the clashes erupted at the demonstration, though there are widespread reports of police officers using disproportionate force against protesters.

At a press conference, Defense Minister Guillermo Botero said that the hard-right government of President Ivan Duque “respects protest as long as it’s peaceful”, but there have been widespread claims that police attacked both peaceful protesters and journalists near Bogota’s central Simon Bolivar Square.

There’s strong evidence against 17 of those arrested. Three people were carrying grenades. We do not know if they were fragmentation or gas, but in any case they were grenades.

The government report that only three civilians were injured, while eight police were hurt – none seriously.

Oscar Ramirez, however, reported that at least 15 were injured by police, reporting that officers were throwing rocks at protesters, as well as tear gas. Videos have emerged of ESMAD brutality during the protest.

Botero has not addressed the multiple reports of police attacking photo journalists who were reporting on the protests. Reporters Without Borders spoke out against the “constant aggression against photojournalists,” which they say demonstrates failures in the training of police regarding the respect for freedom of expression. At least one journalist – a photographer – sustained a head injury after being hit by a police officer.

Colombia’s Press Freedom Foundation (FLIP) condemned the obstruction of journalistic work during the protest, saying that the ESMAD riot police were the responsible body and urging the Bogota police force to ensure press freedom.

Aggressions against the press on the part of law enforcement during demonstrations continue growing dramatically. During this year, the Press Freedom Foundation has registered 15 attacks, one less than the total for 2018.

Two were also arrested in Medellin, though local media reported no violent incidents during the protests in that city.