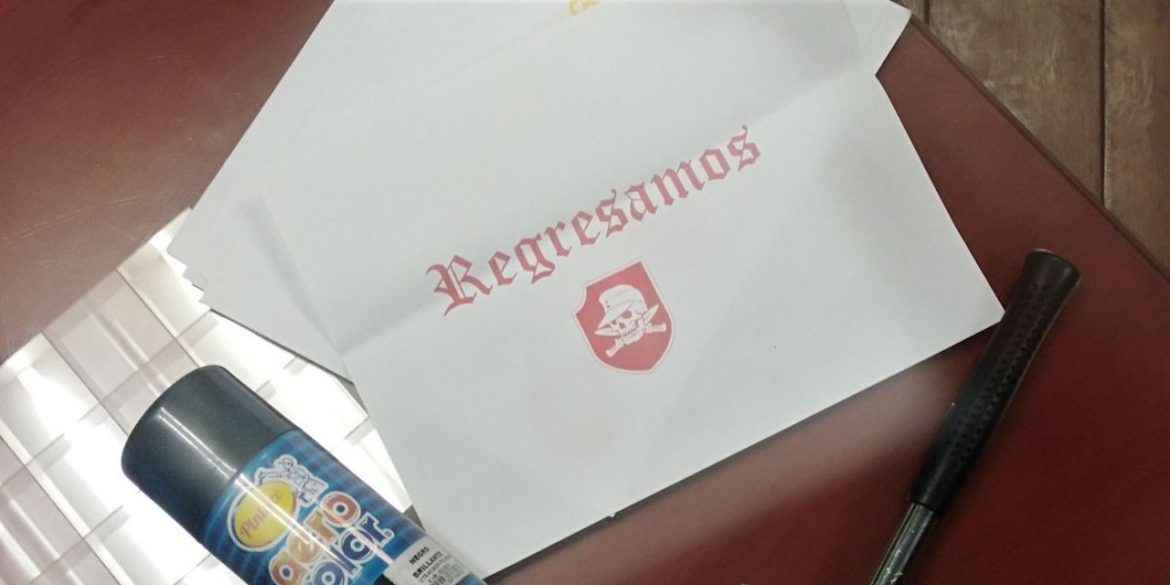 The offices of leftist parties were attacked in Bogota on Friday, two weeks before Colombia’s local elections.

The office of the FARC, the political party of demobilized guerrillas, and the office shared by the Colombian Communist Party (PC) and the Patriotic Union (UP) were attacked.

The attackers opened fire at the PC / UP office and threw a firebomb through the window that failed to go off. From the FARC’s office, the attackers took propaganda material, according to a representative.

The attackers left pamphlets signed with a skull saying “We’re back” at both offices.

A Celtic cross, a symbol used by neo-nazi groups Third Force and the National Socialist Union of Colombia, was spray-painted on the front of the FARC office.

The attacks were condemned by the parties and moderate leftist actors.

These attacks take place within the context of other types of aggression like the assault, death threats and assassination attempts against national leaders and candidates of the UP / Humane Colombia alliance, and the repression of student protests by [riot police unit] ESMAD that illustrate a climate of aggression and attacks against social protest.

The two political parties stressed that the attack took place on the 32nd anniversary of the homicide of UP presidential candidate Jaime Leal and two weeks before the PCC is expected to testify before the Truth Commission.

FARC representative Sandra Ramirez said on Twitter that “fascism is gaining strength to attack our willingness to implement the peace agreement” of 2016 in which the former rebels agreed to lay down their weapons and form a political party.

“We demand from the State, which is led by [President] Ivan Duque, guarantees for the exercise of politics. Our commitment to peace will not yield to pressure from its enemies,” Ramirez added.

Duque, whose far-right Democratic Center party opposes the peace process, did not respond.