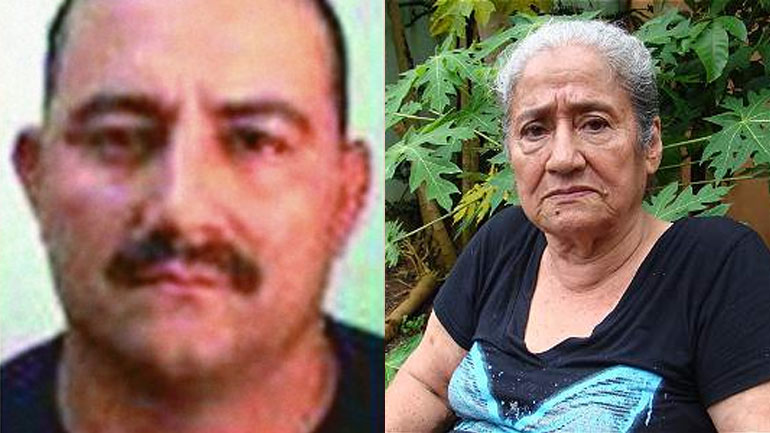 "Otoniel" (L) and his mother
News

The mother of “Otoniel“, Colombia’s most wanted drug lord, hopes her son ends up in jail as she is worried about his fate both in this life as well as the afterlife.

Daniel Antonio Ususga, a.k.a “Otoniel”, commander in chief of the neo-paramilitary group “Los Urabeños“, has had more than 1,000 troops looking for him in the northern region of Uraba since February and is yet to be found.

Newspaper El Tiempo visited his mother in the heart of the region from where Otoniel, only to find a devout evangelical Christian and concerned mother who sells eggs for 15 cents a piece.

The seemingly modest mother of Otoniel, Ana Celsa David, told the newspaper she does not want to live “like a queen,” but only “to go up there, to heaven.”

The same she wishes for her son, but in order for Otoniel to go to heaven he would have to end his criminal activity and repent his sins, said David.

“I wish my son was in prison. He would be safer, and he could repent and go to heaven,” she said.

“If we do not repent we all end up in the same place,” hell, Otoniel’s mother said.

David, who has been married to Otoniel’s father for 57 years, recognized her son had taken the wrong path, but blamed a lack of opportunities for her son’s criminal career that began in guerrilla group EPL, then the paramilitary AUC and now the AUC’s main heir, the Urabeños.

According to his mother, Otoniel joined the guerrillas at the age of 18 due to a lack of opportunities in the region of Uraba, which has been a stronghold for paramilitaries, guerrillas and drug traffickers since the 1970s.

Since then, he has converted to become Colombia’s most wanted drug lord and leader of what is estimated to be the country’s largest illegal armed group after the FARC.

“They will not find him, if God does not want them to,” she said.

Her greatest concern now, is that her son — who she knows “has no escape” — is protected by God, “the only one who can save him.”