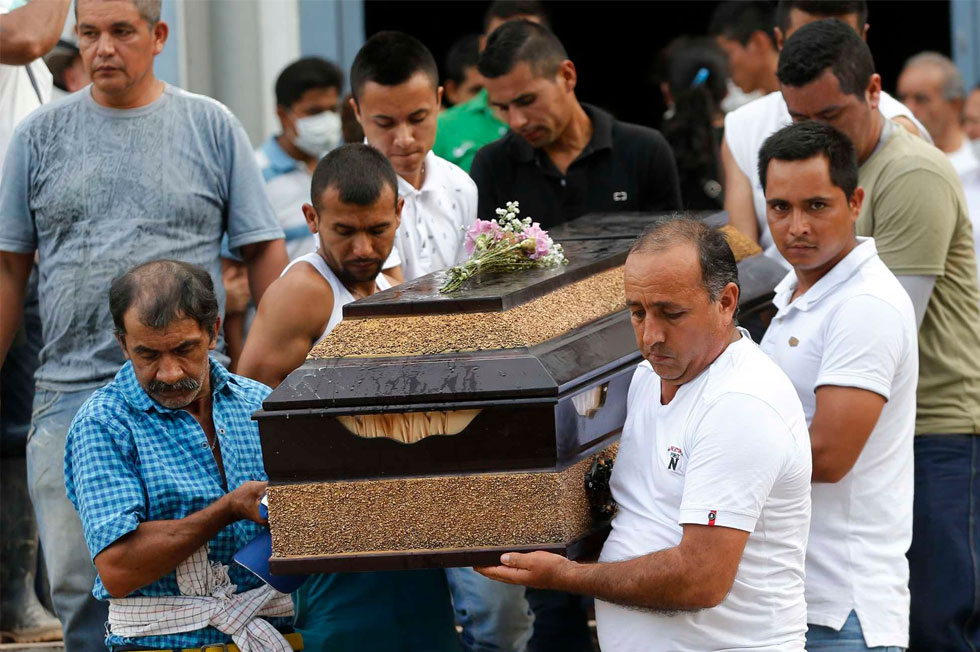 Following Colombia’s worst natural disaster in recent memory that has left at least 264 people dead and an equal number missing, the surviving residents of the town of Mocoa have begun their excruciating procession of burials.

Families have started to be reunited with the bodies of lost loved ones, three days after floods hit the capital of Colombia’s southern Putumayo province.

Those with relatives still missing were beating on the bars of the town morgue, begging to hear news about their lost friends and family, reported La Vanguardia newspaper.

Give us the bodies!

Regularly, the devastated locals gathered around a man with a megaphone, reading out a list of names of identified dead. The silence of the crowd only broken by a mother’s scream or a father’s sob.

Many people from around Colombia have traveled to Mocoa, in search of news concerning missing relatives. These out-of-towners have joined the locals as they line up and run their fingers down the lists of those dead or missing, praying not to see a familiar name.

Colombia’s Medical Examiner General, Carlos Valdes, expressed his regret and asked for patience, explaining that forensic experts must take due time over the autopsies and identification or risk delivering the wrong bodies, Vanguardia reported.

According to Valdes, 174 autopsies have been carried out leading to the identification of 55 bodies, leaving hundreds in anguish.

Rescue workers who have been at the scene since Saturday don’t know whether to cheer or cry when a body is found and can be given a proper burial, but to the devastation of a family, according to weekly Semana. 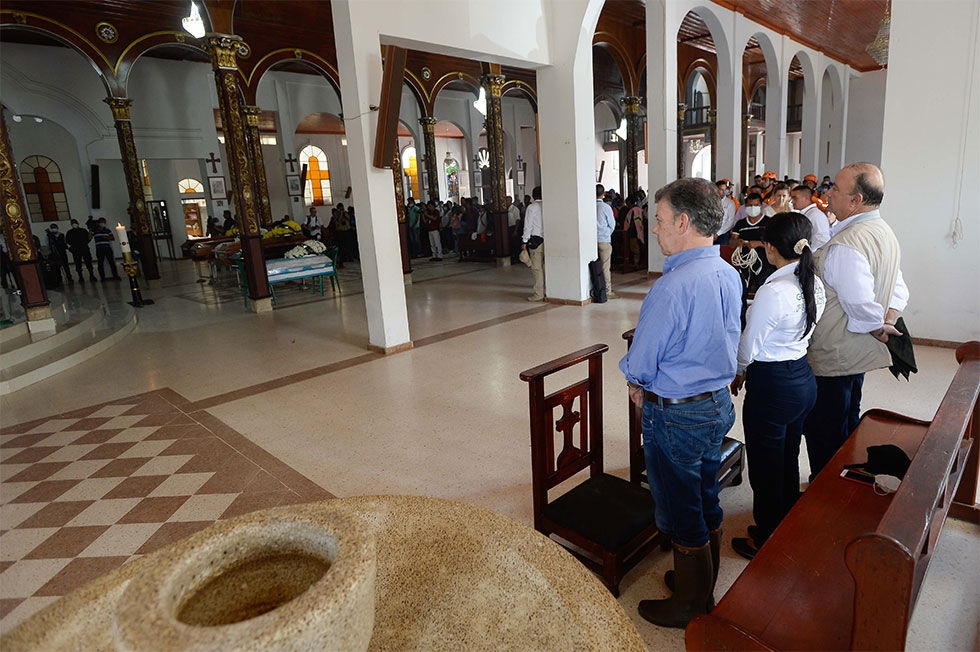 A sign on the church door at the General Santander Square invited residents to attend the first of many mass funerals at the Normandy cemetery, just outside Mocoa, on Monday.

At five o’clock in the evening, Father Nelson de Jesus Cruz raised his hands to give the first blessing to the first group of people who did not survive Saturday’s avalanche. Around him, dozens of gravediggers raised their spades and shovels to dig the graves.

The smell of putrefaction from the decaying bodies reportedly was so bad that many in the cemetery had to wear masks to prevent nausea. 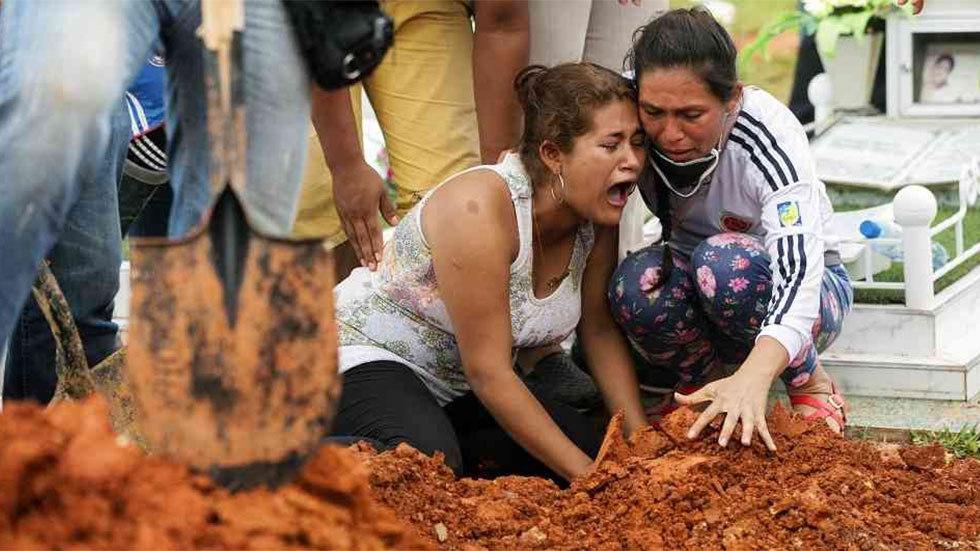 Meanwhile aid, both foreign and domestic, has continued to arrive for victims in the disaster area.

International aid has begun to trickle in from various sources.

The US embassy announced Monday it would initially donate $200,000 for emergency assistance and reconstruction efforts. 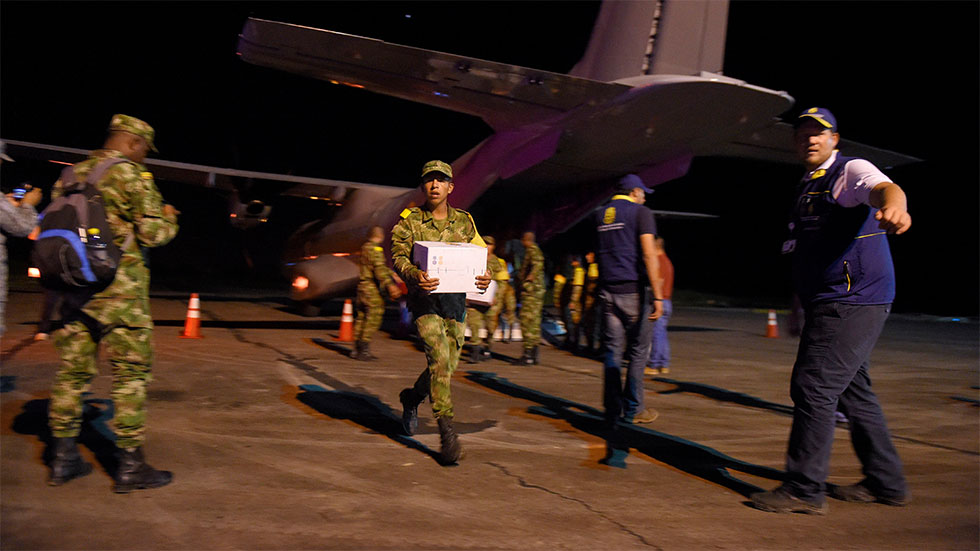 The UN, as well as countries such as France, Peru and Venezuela, have also promised to send relief aid to Colombia, according to humanitarian website ReliefWeb. 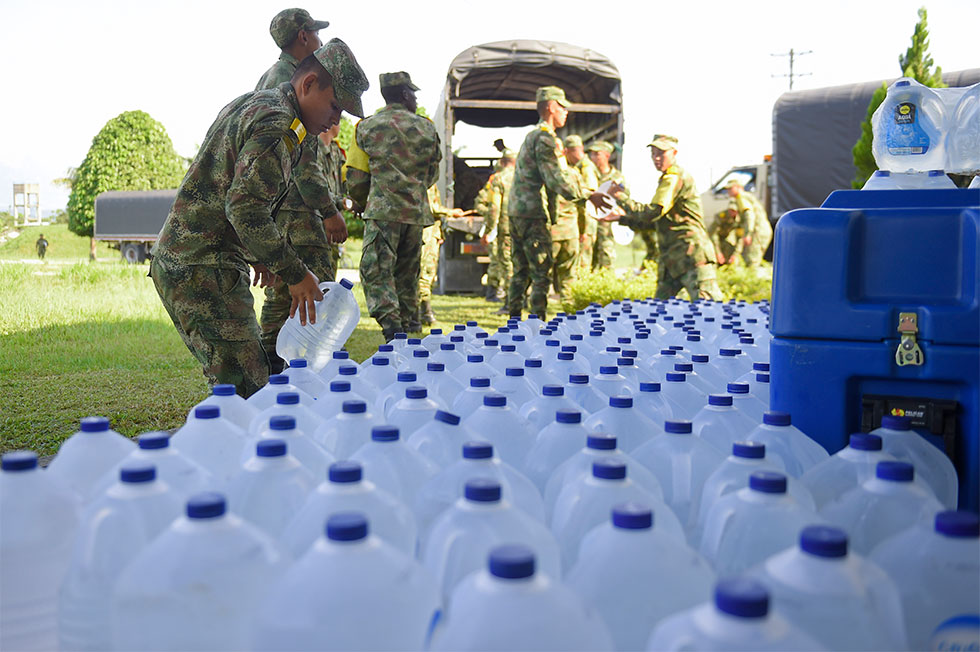 Santos took to twitter to thank the numerous foreign governments who had either expressed their solidarity or vowed support.

In less than 24 hours after the disaster, Colombians themselves have donated over 7 metric tons of aid to the Colombian Red Cross, reported local news outlet RCN News.

The Colombian Red Cross released a tweet on Tuesday detailing that donations were being divided up into four categories, food aid, family hygiene kits, kitchen items and shelter kits.

The food aid packages being distributed include basic food stuffs such as rice, lentils and tuna.

Hygiene kits include sanitary products such as soap, toilet paper and toothpaste.

Finally the shelter kits include mosquito nets, blankets and new clothes along with other basic amenities.

Colombia’s National Unit for the Management of Disaster Risk (UNGRD) has so far received close to $14 million dollars in donations to support the disaster relief effort.

Colombian TV and telecoms giant Claro have launched an initiative whereby subscribers to their mobile service can text the word “Si” to 87889 and the company will donate $2 dollars to the UNGRD for every SMS sent, plus users can give an additional donation of up to $35 dollars.

Rescue workers continue to search for bodies amid the destruction as the authorities try to identify the hundreds of corpses already recovered.