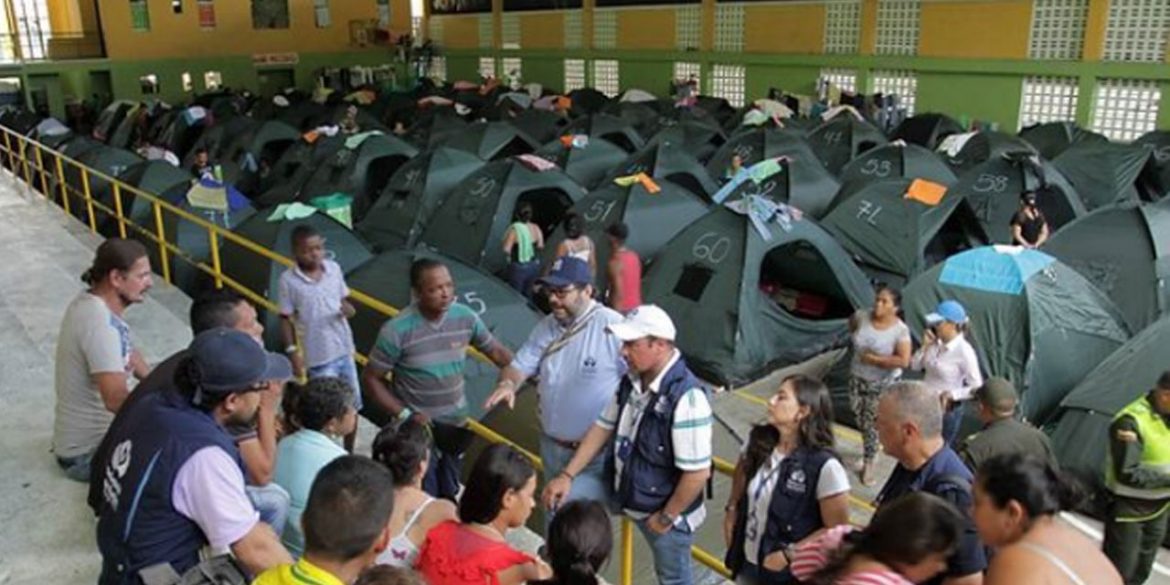 Victims of the disastrous Hidroituango dam project on Tuesday will be removed from their refugee shelter while Medellin energy company EPM refuses to compensate damages or help them find homes after the victims lost theirs in the flood caused by the company.

According to Isabel Zuleta of Rios Vivos, a social movement fighting for the rights of Hidroituango’s victims, officials of Ituango’s city hall showed up last week at the shelter and told the last 18 people living there it was time for them to pack up and leave, claiming “they’ve had a year to get jobs and places to live: it’s time to go.”

According to Ríos Vivos, these refugees cannot leave because EPM has still not compensated them for the loss of their possessions nor found them a place to live.

The attempted eviction is just the latest standoff in a judicial game of ping pong that began last September, when Ituango’s city hall filed a complaint demanding that the 22 families then housed in the municipal sports facility be ordered to leave because their presence “affected the rights of the children of Ituango to recreate.”

The complaint made no mention of the EPM victims’ right to a dignified place to live, nor their right to reparations for the loss of their possessions and livelihoods.

In response to the complaint, Ríos Vivos asked the court to grant an injunction allowing the families to remain in the shelter temporarily. The Inspector General’s Office opened an investigation into the situation and the Ombudsman’s Office issued a statement in support of the Hidroituango victims.

In an interview with Contagio Radio, Zuleta argued that when regular people go up against the elite in Antioquia that EPM represents, their chances for justice in the war-torn province are slim.

It’s very sad that the judges of Antioquia follow the dictates of EPM. They practically copy and paste EPM’s arguments into their resolutions and mention human rights only secondarily, contradicting themselves all of the time. We don’t have any faith in getting help from the judges of Antioquia, but maybe we will with judges from other parts of Colombia that aren’t beholden to EPM.

EPM’s argument for refusing to compensate the victims in the shelter illustrates Zuleta’s point.

According to EPM, in 2010, the company did a census of people living in the area who would eventually be flooded by the filling of the reservoir.

Because the company made an error, the reservoir flooded early and now the company argues that the victims couldn’t possibly have lost their homes in the flood because their names don’t appear in EPM’s census.

Zuleta further explained that when EPM began losing control over the dam project in May last year and flooded the downstream village of Puerto Valdivia, the company has mounted a disinformation campaign in order to divert the public’s attention from the total and permanent displacement it caused to the people in the canyon that is now under water.

EPM was very happy last year when the National Risk System only declared an emergency downriver and not upriver — because flooding there was eventually going to happen anyway with the reservoir. But what the public wasn’t told was that EPM flooded the canyon months early and without warning causing people there to lose everything.

The situation is complicated, Zuleta added, by the fact that most of the people displaced from the canyon are illiterate, have lived all of their lives from fishing, river edge farming and artisanal gold mining, and have no means to earn a living away from the river.

Worse yet, Zuleta said that many of the refugees in the shelter are afraid to leave because they have been threatened by paramilitary forces that are active in the area. Two displaced gold miners, Martin Monsalve and Eugenia Gomez, were forced to flee the shelter in August of 2018 when the paramilitaries threatened to kill them.

After the flood: How the Hidroituango crisis changed armed group dynamics in northern Colombia

Rios Vivos has been paying shelter for the two elsewhere so they can be safe, but have only been able to do so through continuing donations from people who are trying to help the victims.

Unfortunately, the people stuck in the shelter are not the only EPM victims who Antioquia’s corrupt justice system has failed to defend. On February 27, between 27 and 30 families displaced by EPM were evicted from a shelter in Sabanalarga. According to Zuleta, most of them were single mothers who had lost their husbands to violence related to the armed conflict.

Although during all of this time, the Ituango city hall has never had to pay for the food or any other expenses of the displaced people sheltered in their stadium, as of today, the mayor’s office continues to insist that Tuesday it will forcibly push EPM’s displaced victims into the streets.