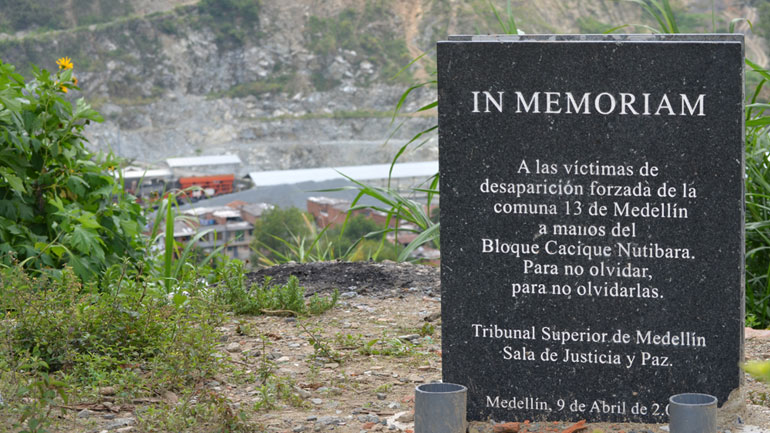 Colombian authorities are set to begin exhuming bodies from what could be the country’s biggest mass grave that has been looming over western Medellin for more than a decade.

The “Escombrera” dumping ground is thought to be the burial ground of dozens of victims of the Cacique Nutibara Bloc, a member group of paramilitary umbrella organization AUC that was run by the extradited “Don Berna.”

The warlord ruled over Medellin’s underworld between 1993, when he took over Pablo Escobar’s “Oficina de Envigado,” to 2008 when he was extradited to the United States.

Locals from the Comuna 13, Medellin’s most western district, have been begging to exhume bodies from the dumping ground for more than a decade only to find private and public entities dumping more rubble over what they believe is the final resting place of their loved ones.

The government refusal to exhume bodies is understandable as it is likely to also exhume the inconvenient truth about the dozens of people who disappeared during “Operation Orion,” a 2002 military/paramilitary operation to rid the district of leftist militias.

At the time, then-President Alvaro Uribe, then-Mayor Luis Perez and then-4th Division commander Mario Montoya, praised the operation as one of the most successful counterinsurgency operations in Colombian history.

For locals however, the violent siege was a major trauma and marked the beginning of a period of violent paramilitary reign during which dozens more were forcibly disappeared by paramilitary forces that “cleansed” the neighborhoods of what they considered unwanted elements, allegedly dumping their victims at the Escombrera.

According to investigative journalism website Verdad Abierta, between Operation Orion and 2008, some 150 bodies could have been dumped there by paramilitaries who assumed control of the area after successfully having removed leftist armed groups from Medellin. According to news website Minuto30, there could be more than 200 bodies buried at the dumping ground while newspaper El Tiempo reported on the existence of possibly 300 bodies.

According to Don Berna, who has been testifying about his role in Colombia’s armed conflict from his US prison, the Escombrera is only one of hundred mass graves in and around the Comuna 13.

After more than a decade of doing nothing, the Medellin Mayor’s Office and the local prosecution decided in February to begin the procedure that would lead to the excavation of the site and the possible exhumation of the missing people believed to be buried there.

Prosecutors have begun investigating General Montoya and former Police commander General Leonardo Gallego over their alleged collaboration with the paramilitaries who have since maintained control over the western neighborhoods, now under the name of “Los Urabeños.”

Caterina Heyck, who is overseeing the exhumation operation for the Prosecutor General’s Office, told El Tiempo newspaper that the digging would begin July 27.

The macabre operation does not just consist of exhuming and identifying corpses; Since June, families who anxiously are waiting to find out what happened to their disappeared loved ones have been receiving psychological assistance.