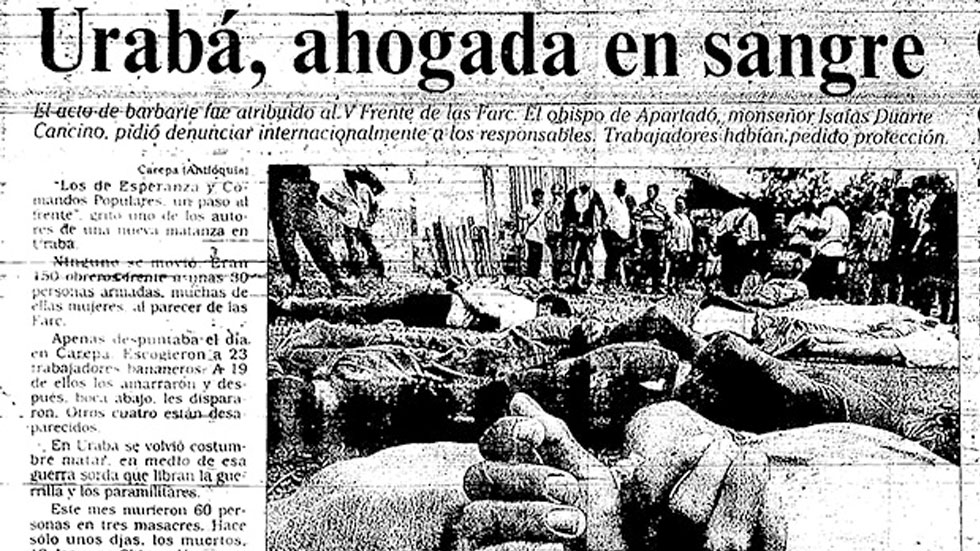 The massacres that have defined Colombia’s armed conflict

Thursday’s massacre in southwest Colombia’s Tumaco is only one of more than 2,000 that have marked the country’s political history of the past century.

Many of the massacres were committed in the armed conflict between Marxist guerrilla groups and the state. Others marked key events leading up to the extreme violence Colombia is now trying to move away from. 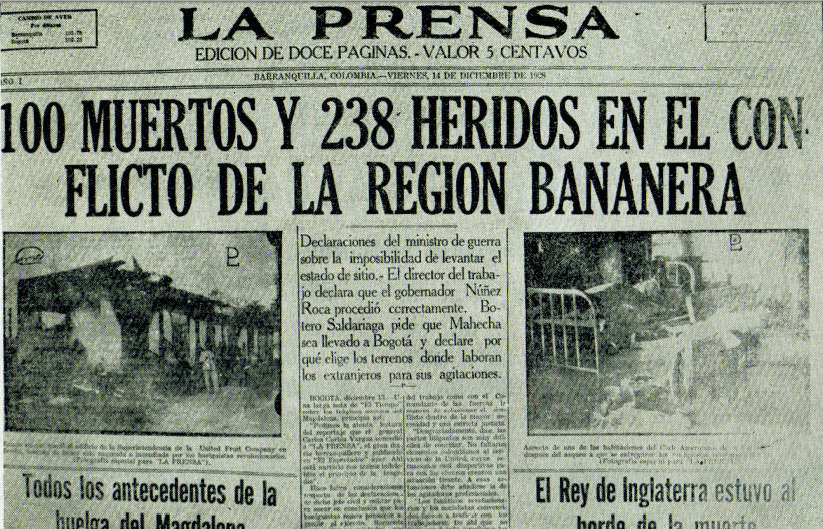 The 1928 banana massacre is possibly the deadliest mass killing in the history of Colombia. It took place 20 years before “La Violencia,” but is often cited as an important precursor.

Nobody knows how many people were killed in the massacre near the Caribbean city of Santa Marta. Between 47 and 3,000 striking employees of US banana firm United Fruit Company were killed when the conservative government sent in the army to break up a strike that was supported by liberals, socialists and communists.

I have the honor to report that the Bogota representative of the United Fruit Company told me yesterday that the total number of strikers killed by the Colombian military exceeded 1000.

US embassy in Bogota

The handling of the strike was fiercely criticized, particularly by Liberal Party politician Jorge Eliecer Gaitan, whose murder would ignite La Violencia in 1948.

Both the FARC and the ELN have cited the massacres as an example of state terrorism that justified the armed rebellion they called in 1964. 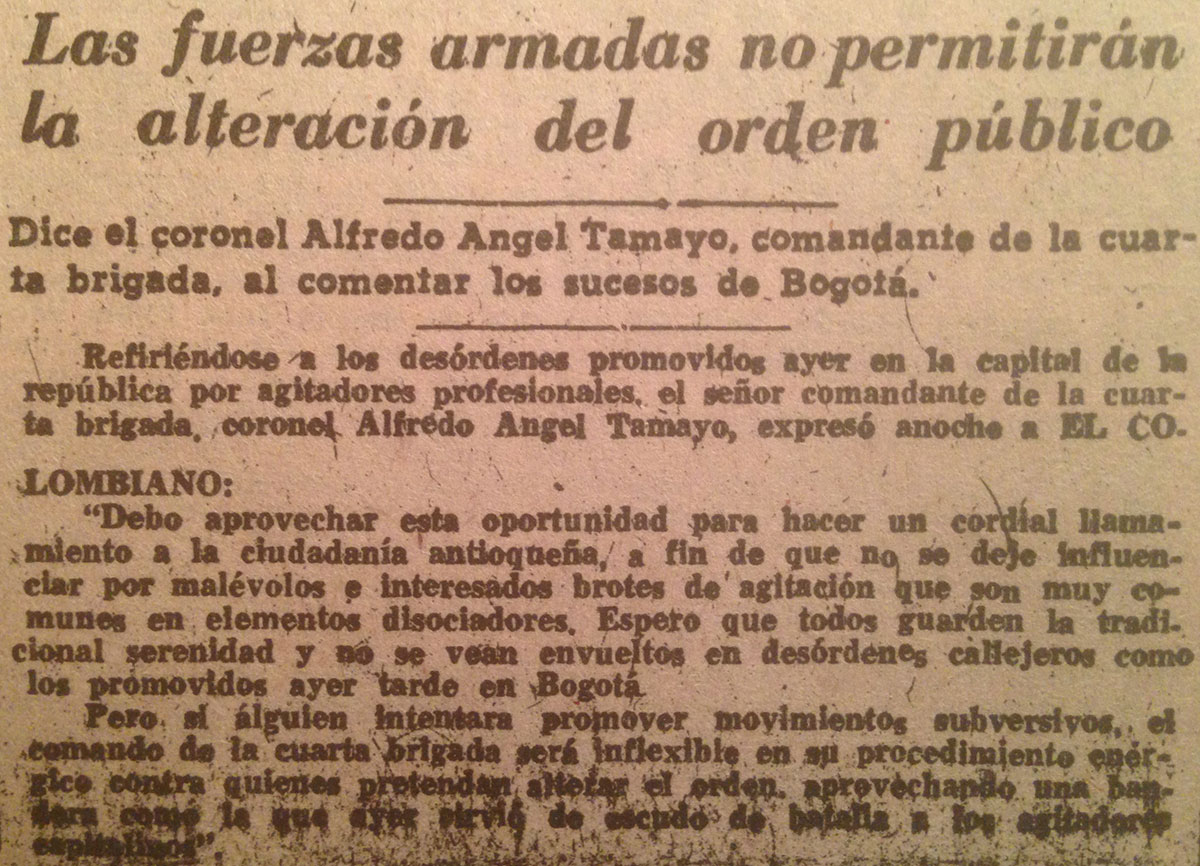 “Referring to the riots promoted by professional agitators yesterday in the capital, the commander of the 4th Brigade, colonel Alfredo Angel Tamayo, let El Colombiano know last night: “I would like to take the opportunity to politely call on the people of Antioquia to not allow themselves to be influenced by malevolent and compromised outbursts of agitation that are very common in elements of disassociation. I hope all will keep the traditional serenity and that disorder in the streets like those of yesterday in Bogota will not be seen. However, if anyone tries to promote subversive movements, the command of the 4th Brigade will be rigorous in its energetic action against anyone who seeks to disturb order.”

The 1963 massacre in Santa Barbara, Antioquia, marked another precursor of the Marxist guerrillas’ call to arms over the violent repression of social protest.

Antioquia governor and newspaper tycoon Fernando Gomez allegedly called in the military to break up a strike by workers of the cement company now called Cementos Argos.

The State, without fully complying with its institutional duties of legitimacy and social control, strengthened as a collective actor and began playing a decisive role in the management of economic policy, and the military and police repression of public discontent.

Twelve workers were killed and 39 were injured in one of many violent incidents between the security forces and civilians that took place before and during the conflict.

Gomez’ newspaper, El Colombiano, reported that “communist agitators” were behind the killing carried out by members of the National Army’s 4th Brigade. 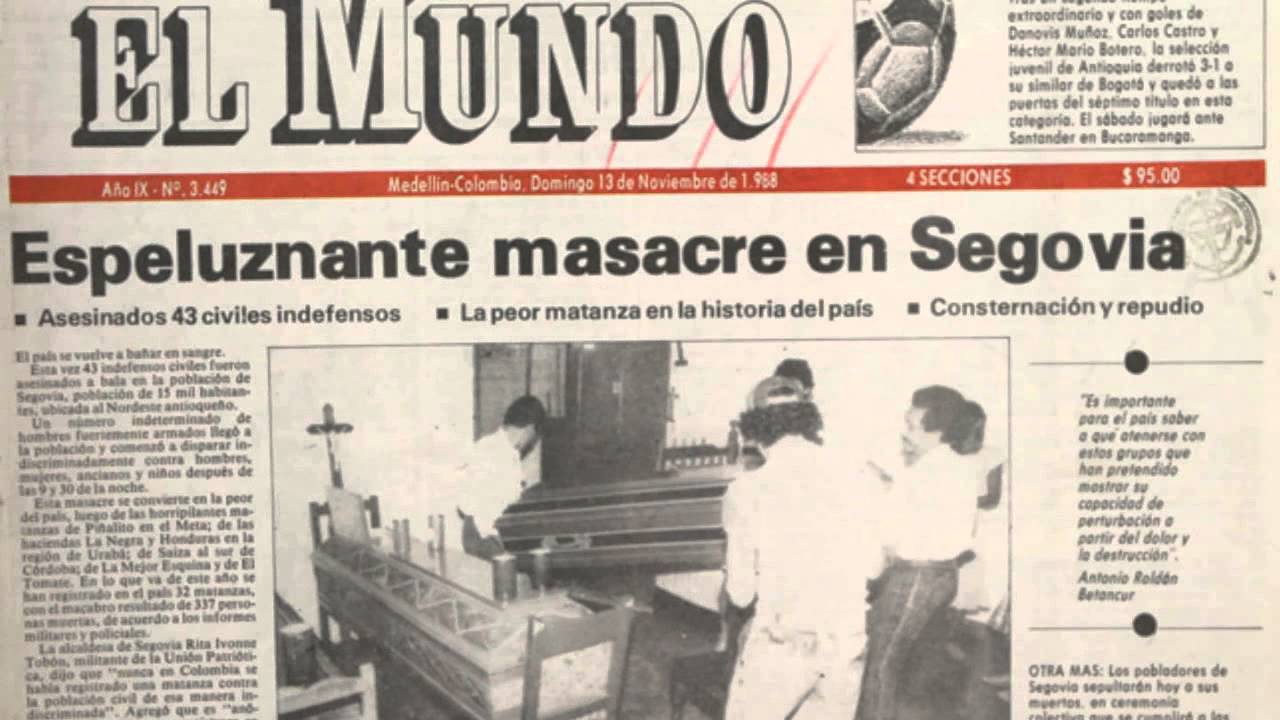 Medellin newspaper El Mundo reports on “the worst killing in the country’s history.”

The Segovia massacre is allegedly the first massacre carried out by extreme right paramilitary forces in collusion with Colombia’s ruling class and security forces.

Perez stayed active in politics until his arrest in 2012. He was convicted to 30 years in prison the year after. By then, thousands of members of the communist patriotic Union party had been assassinated.

The anti-communist massacre was carried out by Fidel Castaño with the knowledge of the National Police and the National Army. The paramilitary warlord would later work together with US authorities to eliminate drug lord Pablo Escobar.

The massacre in La Chinita, another village in the war-torn Antioquia province, is among the worst war crimes committed by the FARC in its 52-year existence as an armed group.

Some 35 people were executed by the guerrillas’ Jose Maria Cordova Block in a FARC offensive against demobilized guerrillas of the EPL they accused of having joined the paramilitaries that previously committed the Segovia massacre.

Two of the victims who were indiscriminately shot turned out to be demobilized EPL guerrillas. The remaining 33 victims were civilians attending a block party organized by a local to finance his children’s university. 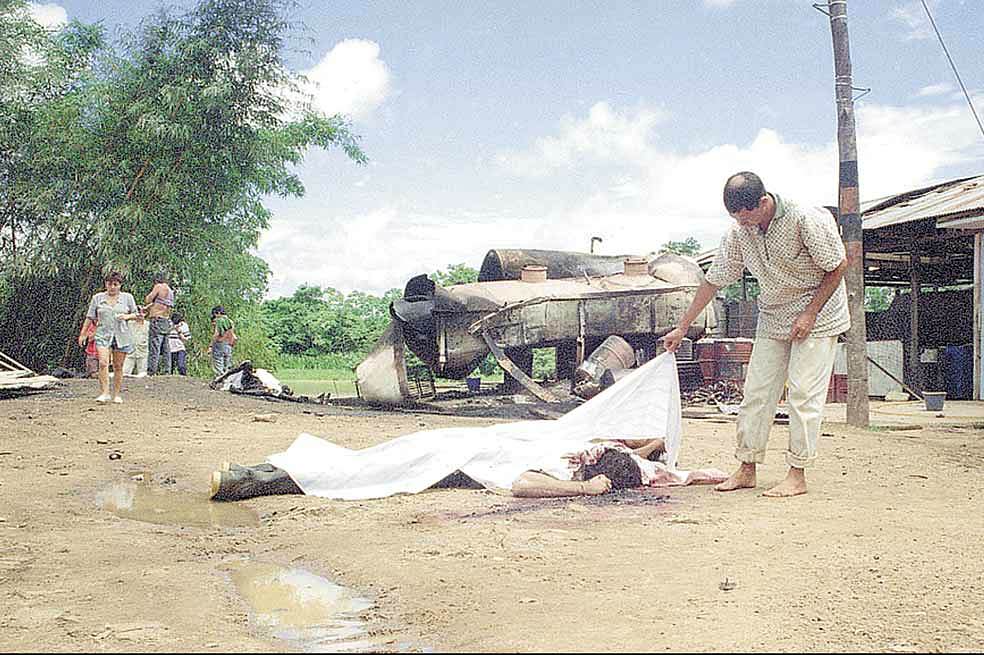 For five days the paramilitary forces stayed in Mapiripan.

Paramilitary forces led by AUC chief Carlos Castaño and with the support of the military killed dozens of locals.

According to released documents, the US State Department reported that 30 people were killed in the massacre in Mapiripan that came to define the paramilitaries’ expansion in 1997.

The real number of victims is unknown, because many victims were dismembered and thrown into the river.

The massacre is among the most controversial because of the military involvement in the massacre, justice’s inability to establish an accurate number of victims and the paramilitary fighters’ later lead role in the drug trade.

A convicted army general has received support from prominent leftist leaders who claim the military commander was falsely sentenced to 40 years in prison for his involvement in the massacre.

The military wouldn’t arrive until three days after the paramilitaries had left. Locals had also massively fled the violence, making an adequate investigation almost impossible.

Multiple locals were convicted for falsely reporting victims in order to receive compensation.

Both “Don Mario” and “Cuchillo” were mid-level paramilitary commanders taking part in the massacre. They would later found respectively the Gaitanista Self-Defense Forces of Colombia (AGC) and the “Puntilleros,” the country’s most powerful drug trafficking organizations today. 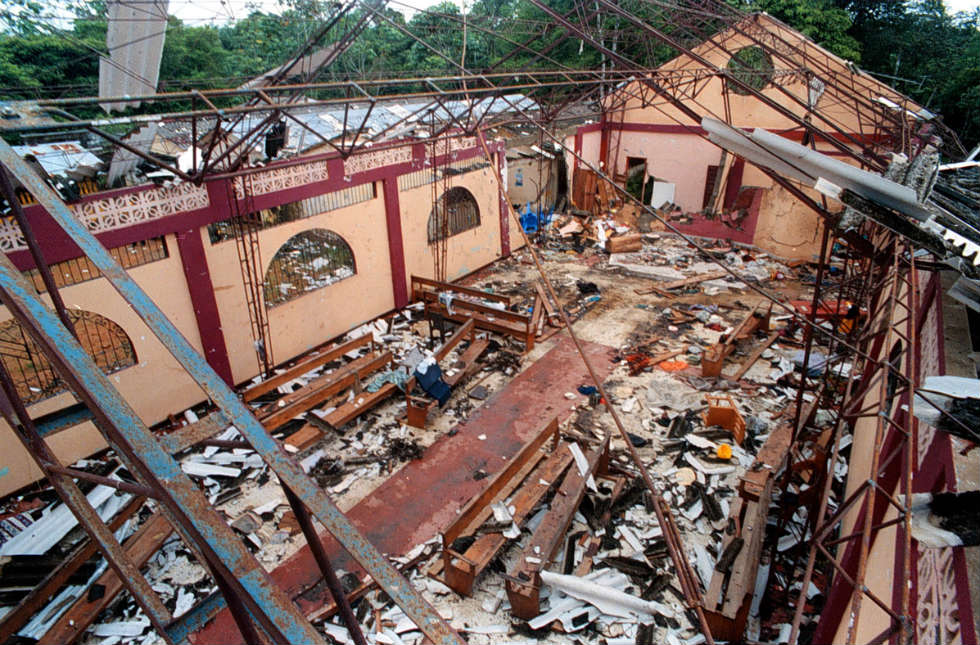 The Bojaya massacre is the bloodiest massacre of civilians of the armed conflict. It was perpetrated in 2002 by the FARC, the group that became a political party after the 2016 peace deal.

The victims were all hiding in the local church while FARC guerrillas and AUC paramilitaries were engaged in combat inside the town.

The guerrillas’ fired a home-made mortar to the paramilitaries. The projectile, however, hit the roof, killing at least 80 people inside.

The community has been among the most vociferous in supporting of a peace process between the state and the FARC and has denounced a public lack of solidarity.

The FARC’s political leader and responsible former commander Luciano Marin, a.k.a. “Ivan Marquez,” has been actively engaged in a reconciliation process with the Bojaya survivors. 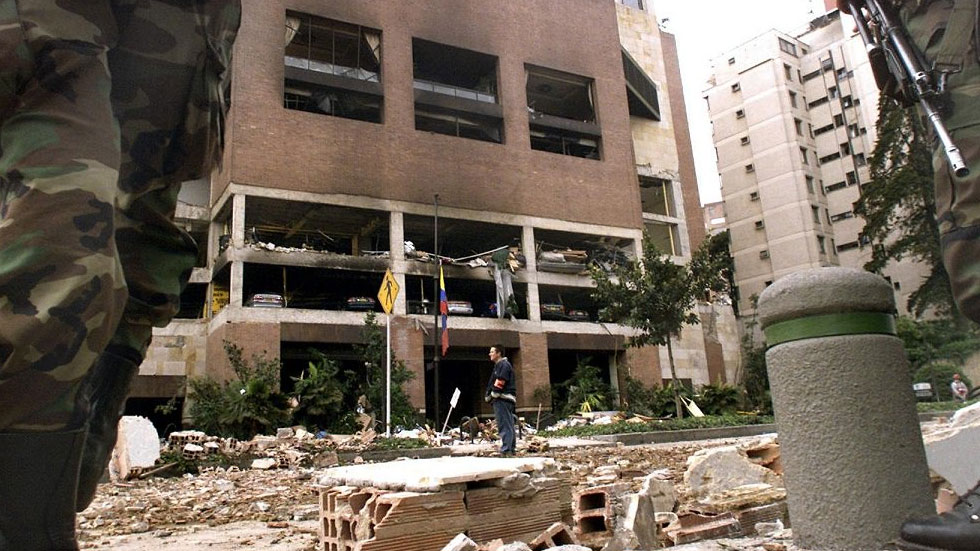 The terrorist attack on the Nogal club kill 38 and injured more than 200.

By 2003, both the FARC and the AUC had been declared terrorist organizations because of their indiscriminate attacks on civilians.

Why the FARC entered a car bomb into the parking garage of the elite club in Bogota is still unclear. The attack left 38 innocent civilians dead and is one of the most traumatic terrorist attacks in Colombia’s history.

According to victim representative Bertha Fries, the FARC has said they bombed the club on suspicions AUC leader Salvatore Mancuso was staying in Nogal.

However, nobody knows whether Mancuso was supposed to be in the club at the time of the attack.

The victims and perpetrators are going through a reconciliation process after the former guerrillas agreed to tell the truth and repair their victims.