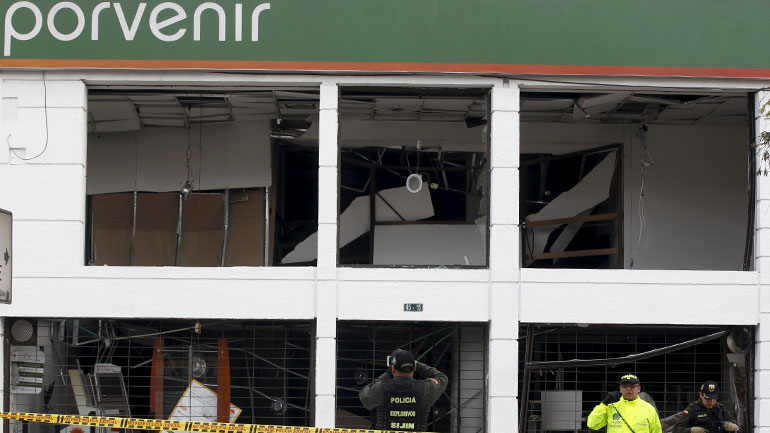 Majority of ‘ELN bombers’ not charged over Bogota attacks

The trial of 13 suspects who were detained for bombing two pension fund offices in Bogota earlier this month got a weird twist on Monday when media reported the majority was indicted for unrelated issues.

The mass arrest of 15 suspects last week had already caused street protests by non-governmental organizations who claimed the Prosecutor General’s office was seeking judicial “false positives” in order to fake a quick success.

The ELN, the group supposedly behind the attack on the Porvenir offices, denied any affiliation with the people who were arrested.

Some of the arrests were widely publicized on Thursday with spectacular helicopter footage and videos of heavily armed police entering the home of one of the suspects in the Colombian capital.

However, two of the detainees were released on the same day, either due to a lack of evidence or due to irregularities during their arrest, depending of the source.

Nine of the suspects were part of the Peoples’ Congress, an NGO that claimed that its members had been the victim of arbitrary arrests.

While indicting the bomb suspects, the majority of the defendants were not linked to the attacks, but student protests that had gone violent on May 20, according to local media and the attorney of some of the suspects.

“We’re seeing that none of the evidence that the prosecution has surrendered is related to the attacks on Porvenir and that they are mixing up a protest, a riot at the National University with these acts of terrorism,” the attorney said.