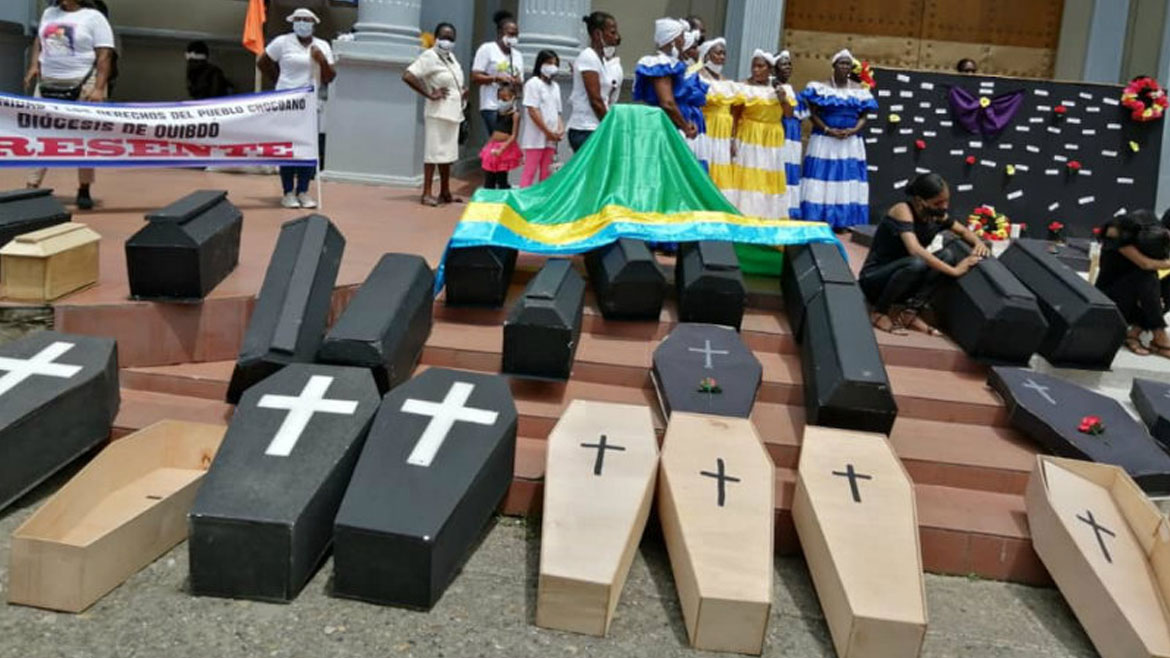 Locals from western Colombia beg for help amid surge in violence

Locals from Colombia’s western Choco province are begging for help amid a humanitarian crisis that appears to be spiraling out of control.

One in 10 inhabitants of Choco’s rural regions were confined to their homes in the first quarter of the year because of armed conflict, the United Nations said last week.

The fighting between guerrilla group ELN and paramilitary organization AUC is depriving locals of food and drinking water, according to humanitarian organizations.

Almost three quarters of the people in Choco have no access to drinking water, according to the UN.

The violence additionally is making it almost impossible to get food, community leaders from the north of the province told newspaper El Espectador last week.

Roads that connect rural communities to regional market places are littered with landmines and paramilitaries allow locals only to buy small quantities of food, according to an indigenous leader.

We can’t even move around the reserves out of fear of being trapped. We are also having difficulty hunting, fishing, planting crops and extracting timber.

Aid workers of the Family Welfare Institute were able to travel to San Juan in the south of the province in January to rescue two toddlers who were literally starving to death.

One baby from the northern Carmen de Atrato municipality died of starvation days before, according to a community leader.

As many as 11 children starved to death in the central Alto Baudo municipality in August last year, the mayor said.

There is no saying how many people have starved to death or are at the brink of starvation as the illegal armed groups make it impossible to enter the region.

The bishops of Quibdo, Istmina and Apartado urged the national government for help on multiple occasions over the past year, but to no avail.

Also the situation in the capital of Choco, Quibdo, is gradually getting worse.

Quibdo’s 33.8% youth unemployment rate is the highest in Colombia and more than 47% of the city’s inhabitants live in poverty, according to statistics agency DANE.

Local economist Jilmar Robledo stressed on Twitter that poverty and state neglect are fueling crime and violence in Choco’s capital.

Young people are killing each other. There is a government crisis, silence from the authorities and the country ignores what is happening.

So far this year, at least 65 people were murdered in the city of 130,000, local journalist Francisco Palacios said Tuesday.

This number had risen to 68 a few hours later, according to Colombia’s former Science Minister Mabel Torres.

A few minutes ago in the midst of a shooting three dead and among them a 4-year-old girl. The dreams of youth are extinguished. There is no way not to feel pain and deep sadness.

The deadly violence in the capital has been escalating since 2018, according to the medical Examiner’s Office.

According to Robledo, the majority of young people in Choco’s capital have actively opposed the violence, but “the youth marches have not been heard.”

We need the support of Colombians. Don’t turn your back to this situation.

According to Palacios, the local police department is unable to confront the violence because police officers often grew up with those involved in violent crime.

It is no secret that in the popular neighborhoods, police officers from the poor districts are seen partying in the same places with those who exercise control over them, both being aware of their role in the security of the city.

Quibdo Mayor Martin Emilio Sanchez has refused to address the violence in the city. “You go and talk to them,” Sanchez told young people demanding an end to gang violence.

Choco governor Ariel Palacios also can’t do much about the situation in the province as he was arrested for allegedly embezzling coronavirus emergency funds in March.