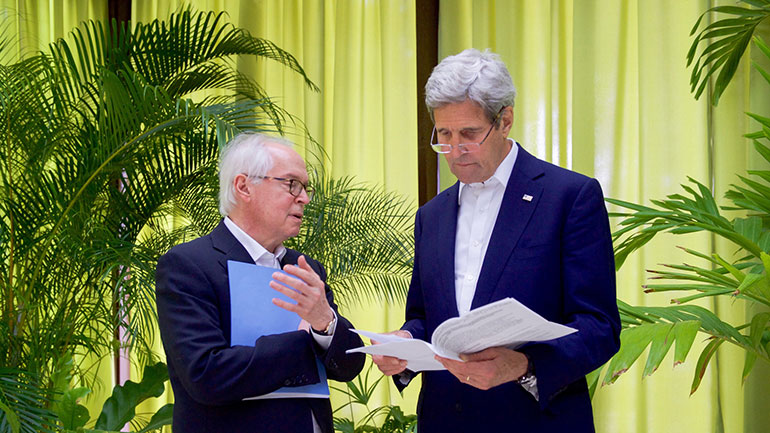 Protection against paramilitary violence was a central topic in US Secretary of State John Kerry’s visits Monday with peace negotiators for the Colombian government and FARC guerrillas.

The head of the Colombian delegation, Humberto de la Calle, said after his team’s hour-plus long meeting that Kerry and Special Envoy Bernard Aronson made “extraordinarily concrete” commitments to ensure the safety of FARC fighters who disarm. 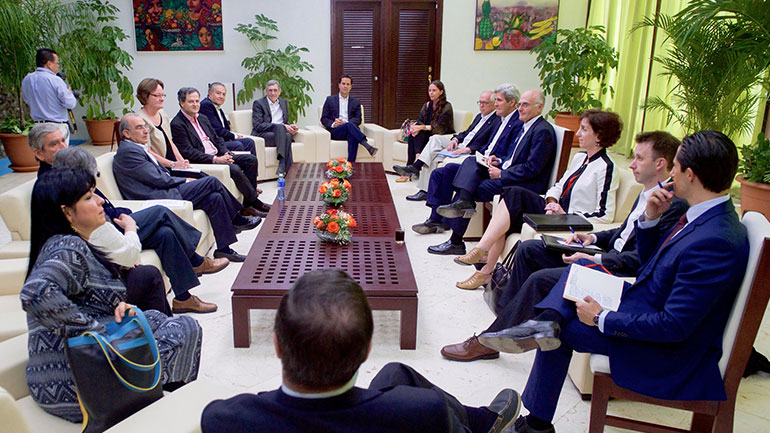 The FARC released a statement it presented to Kerry during its meeting with him. The first specific request was for help against officially defunct paramilitary forces.

While the government and the US have downplayed the significance of successor groups of the AUC paramilitary organization, groups formed during and after the AUC’s demobilization between 2003 and 2006 have since become Colombia’s primary human rights violator..

Days after leftist leaders expressed concern about the killing of 29 rights leaders in two weeks, the FARC expressed fears their disarmed members could be easy targets for the groups once formed to violently combat the left.

“Mr Kerry, through you we ask the US to help curbing paramilitary violence, which amid the peace process continues taking the lives of human rights defenders and social leaders with impunity,” the FARC statement read.

Kerry’s “concrete commitments” to protecting disarmed FARC fighters would be an important part of meeting the FARC’s request.

De la Calle, of the government delegation, said afterward that it was “a very productive meeting” and that in addition to restating his country’s strong support for the negotiations, Kerry made some explicit commitments.

“There were some extraordinarily concrete elements, for example the announcement of support by the US for the security of people who lay down their arms, which we know is one of the critical topics in the negotiations,” said de la Calle.

The Colombian negotiator also said that Kerry and the Colombian team had an “extremely detailed review” of the current state of the talks, including continuing stumbling blocks and immediate prospects.

The head of the FARC’s negotiating team, “Ivan Marquez,” tweeted approvingly after the meeting that Kerry had noted: “We’ve had some differences, but in the case of peace there is no difference.” 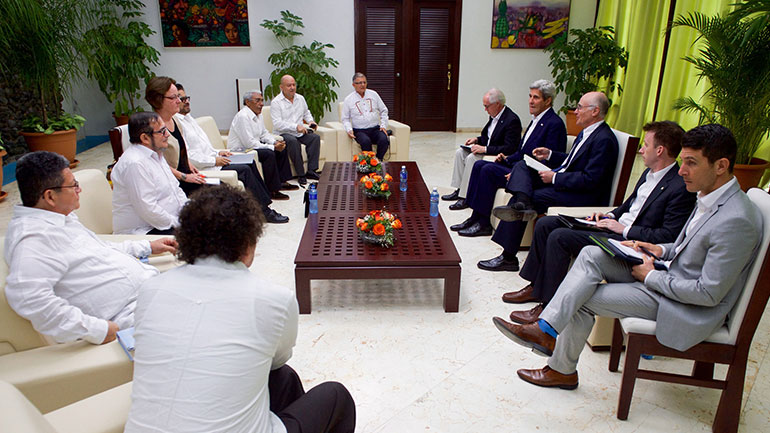 The highly anticipated meetings were not expected to break new ground, but rather to hammer home strong US support for the negotiations, even in the face of severe criticisms from conservatives, especially those running for the Republican presidential nomination.

The apparent lack of discord during the two meetings spoke volumes about the optimism all sides, including the US and Cuba, have regarding the peace negotiations.

In comments before Kerry’s two meetings, US President Barack Obama said he was “optimistic” about the prospects for a peace treaty, and he thanked Cuban Pres. Raúl Castro for hosting them. Castro then also spoke optimistically about the likelihood of a deal.

Obama, Kerry and other US and civilian leaders are in Havana for three days of meetings and socializing, aimed at furthering the normalization of relations between the two countries.

While a final peace deal between the Colombian government and the FARC is not expected by the originally announced deadline of Wednesday, March 23, some kind of announcement is still expected in the next 48 hours.

The meeting between Kerry and the FARC was the first encounter between a US state secretary and a US-designated terrorist group since the 1990s when the US mediated in conflicts in Northern Ireland and Israel.