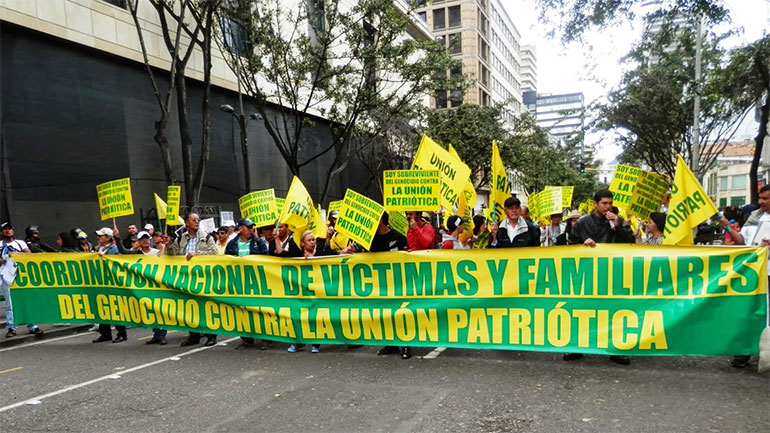 Twenty-nine members of Colombia’s political left have been killed in the last two weeks. The killings spark fears of a renewed spate of political extermination exactly when extreme leftist rebels seek to disarm.

The victims of the recent assassinations were community leaders, land claimants and members of peasant movements according to news outlet UNO.

Aida Avella, the president of left-wing party Patriotic Union (UP), fears that this new wave of assassinations may be the start of a new phase of political extermination against the left.

Avella’s party was the victim of a major paramilitary extermination campaign. Thousands of party members, including a presidential candidate of the Patriotic Union, were murdered by drug dealers, far-right paramilitary groups and members of the security forces.

The assassinations come at a crucial time for the political left as Colombia’s government and the country’s larges guerrilla group, the FARC, enter the final stages of talks to sign an agreement to end the 51-year conflict ahead of the March 23 deadline.

The FARC has already said that unless the state is able to protect its demobilizing members, it will not be able to disarm.

“These are the spokes in the wheel of peace in Colombia. The enemies of peace don’t want it to be signed, or there to be peace,” the UP chief, who spent years in exile, told local media.

This security situation of Colombia’s left is being reviewed by the office of the High Commissioner of the United Nations for Human Rights.

The international body is also following up on eight of the 12 murders of leftist leaders that have been registered in the country between January 1 and March 10, reported television network RCN.

“Clearly there are criminal structures in the country who want to sabotage the peace process and that are threatening and killing leftist leaders,” said senior adviser Guillermo Rivera to RCN.

The killings were recorded mainly in the departments of Cauca, Sucre, Cundinamarca, Antioquia, Arauca, Bolivar and Putumayo. Among the victims were two minors, said Avella.

The national government has said to also be concerned about the issue. President Juan Manuel Santos ordered the security forces in February to intensify operations targeting what the government calls “BaCrim.”

She emphasized the importance of the intervention of international justice to ensure that those responsible for these crimes are held accountable, “the crimes may go unpunished here, but in international courts they will not go unpunished.”

The violence targeting leftists in the 1980s and early 1990s ended efforts of the FARC to become a political party and radicalized the country’s left, which strengthened the FARC and — fueled by drug money — further escalated political violence.

Assassinations were rampant and continued into the early 2000s. Avella herself, fled the country in 1995 after surviving a third assassination attempt. Others members of the party ultimately followed Avella’s lead and went into exile abroad.

With these atrocities still fresh in the mind, recent events have triggered fear that left wing political groups may be facing the same again as the FARC guerrillas move towards demobilization and towards political participation.