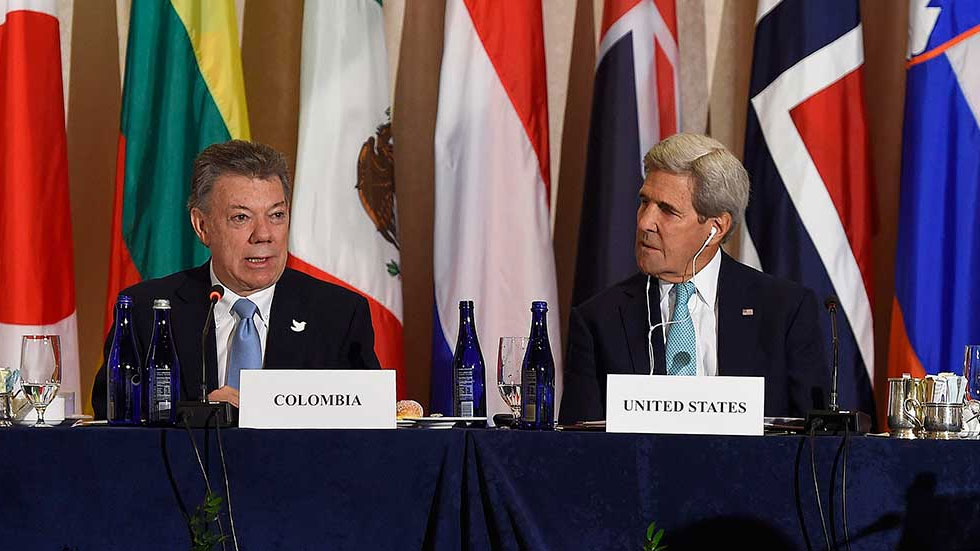 US Secretary of State John Kerry said Sunday he will visit Colombia next week to attend the ceremonial end to the South American country’s more than half-a-century armed conflict between leftist FARC rebels and the government.

Kerry said so while hosting a round-table meeting of the Global Demining Initiative for Colombia in New York where he urged other nations to contribute funds.

The ceremony Kerry will attend on September 26 will mark the end of a war that will continue to make victims as long as the country continues to be riddled with landmines, the US secretary of state said with Colombian President Juan Manuel Santos at his side.

“The demining initiative is both a humanitarian necessity, but it’s also a boost to peace. This is one of the things that will help to give confidence to the people of Colombia that the world is invested in this and we are serious about it.”

Kerry said that the US government had earmarked an additional $36 million in aid dedicated to landmine removal and asked other country’s “to come forward as well.”

“We know from decades of experience it takes time, it takes money, and it takes experts and hard work in order to identify and clear mines, and to educate the local population about the dangers. So whether in Colombia, Afghanistan, Southeast Asia, Africa, there are best practices that we all know; there are no short cuts,” said Kerry.

According to the national government, more than 11,000 Colombians have been either killed or maimed by landmines over the past 15 years. More than 4,000 of the victims are civilians.

Colombia will need to spend $200 million to get rid of all landmines and other types of explosives and thus prevent further casualties, Santos said last year.

The Global Demining Initiative for Colombia seeks to support the South American country’s newly set and very ambitious target to be free of landmines before 2021, five years sooner than Santos estimated a year ago and 15 years sooner than estimated by former Post-Conflict Minister Oscar Naranjo.

Colombia’s task is huge and lengthy, but equally urgent.

This ceasefire was announced in June already and the FARC’s demobilization and disarmament will begin on Tuesday next week.

However, more than 688 municipalities, or 63% of Colombian territory, is currently at some degree of risk due to the presence of landmines.

The FARC, the group that has laid many of the landmines, has helped the government to locate minefields since more than a year before the ceasefire in a pilot project in northern Colombia.

As part of the peace deal, the government and former guerrillas will continue to work together on demining the country once peace is signed.

Additionally, the government’s begun the training of some 10,000 soldiers who will be specialized in landmine removal.

Nevertheless, after decades of war, Santos said it will be “a very intense job to be able to fulfill the goal of being a landmine-free country by the year 2012.”