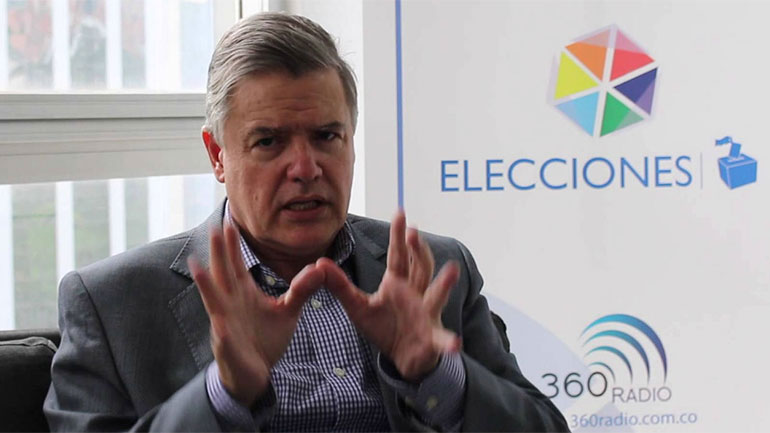 Former Senator Juan Carlos Velez is a lawyer and a strong supporter of former President Alvaro Uribe with a decades-long career in Colombia’s politics.

Velez comes from a wealthy family of conservative businessmen in Medellin, Antioquia.

Velez studied administrative law at the University of Rosario in Bogota. He achieved a diploma in finance from the University EAFIT of Medellin. He also qualified in defense and national security at the Superior School of War of the Armed Forces General Command in 2002.

After Velez graduated, he became a Conservative Party council member for Poblado, the wealthiest district of Medellin, in 1990 when the city was going through the worst violence caused by the then-almighty Pablo Escobar and his Medellin Cartel.

During this time as member of the district council, he was a follower of the conservative anti-corruption politician Alvaro Gomez who was eventually assassinated in 1995. He kept his position for three consecutive terms.

Following the death of Gomez and with the help of Jorge Hernandez, the co-owner of local conservative newspaper El Colombiano, Velez became a supporter of Andres Pastrana and was elected to the Medellin city council.

Velez was the only councilor running backed by the New Democratic Force, a conservative pastranist group, at a time when the party held the town council with Sergio Naranjo as mayor.

In 1997 he was reelected to the town council of Juan Gomez, whose family were also owners of El Colombiano.

In 1998 Pastrana won the presidential elections which was good news for Velez’ career.

Velez decided not to run again for the council in 2000 betting on the possibility of a governmental appointment. He bet right and the following year Pastrana named him director of Civil Aeronautics.

Velez authorized the fusion of two main Colombian airlines, Avianca and Aces. The superintendent of industry and commerce at the time, Emilio Jose Archila, did not authorize the fusion but he was recused and the matter was passed onto Velez.

When Alvaro Uribe became president Velez was one of the only officials to maintain his post.

Velez became an Uribe loyalist and in 2005 he resigned from his position in order to run for Congress for the U Party that had been created to support Uribe in Congress.

Velez became 23rd on the list of U Party candidates. Unfortunately for Velez only the top 20 received seats in the Senate.

However, his attempt for entrance to the Senate did not go unnoticed and was named president of the union for travel agents, Anato.

This venture into unions was short-lived. The next year Velez got his seat in the Senate, replacing Mauricio Pimiento who had been one of dozens of Uribe-loyal Congressmen who were arrested because they had used paramilitary death squads to get elected.

He quickly became one of the most visible Uribe loyalists in the Senate, defending military members’ exemption from ordinary justice and opposing a law that sought to compensate the 7 million victims of the armed conflict.

The right-wing politician opposes euthanasia and the legalization of marijuana, and supports life sentences for rapists and murderers of children.

In 2010 he was reelected with 62 thousand votes and the largest proportion of votes for the U Party in Medellin and Antioquia.

This landslide was in part due to the fact that big Uribe loyalists from his home Antioquia province were not running. Mario Uribe, the former president’s cousin, had been arrested in the parapolitics scandal and Luis Guillermo Velez had died of a heart attack in February 2007.

Over the next few years Velez became Uribe’s closest ally in a U Party that became incresingly split between lawmakers loyal to Uribe and those loyal to Uribe’s successor, current President Juan Manuel Santos. When Uribe broke with his former Santos, his former Defense Minister, Velez sought to leave the U Party in favor of Uribe’s new party, the Democratic Center.

After the presidential elections of 2014, Velez announced his intention to run for either mayor of Medellin or governor of Antioquia, two of the most powerful positions up for grabs in the local elections on 25 October 2015.

In December 2014 he decided to run for mayor of Medellin and in March, Uribe announced that he would back Velez as a candidate for the Democratic Center, the party former by Velez’ political leader to oppose the policies of Santos.

Velez took a surprising lead role in the 2016 referendum on the peace process with Marxist rebel group FARC after former campaign manager Luis Alfonso Hoyos fled the country after giving classified information obtained by legal spying on the talks preceding the process.

Things went no better for Velez after he surprisingly admitted the campaign strategy for the “No” side had sought to foment public discontent and “avoid facts,” which delivered the party its first electoral victory, but plunged the peace process in crisis.

The country’s Prosecutor General and victims’ representatives then announced lawsuits for electoral fraud, a crime with a minimum penalty of four years.