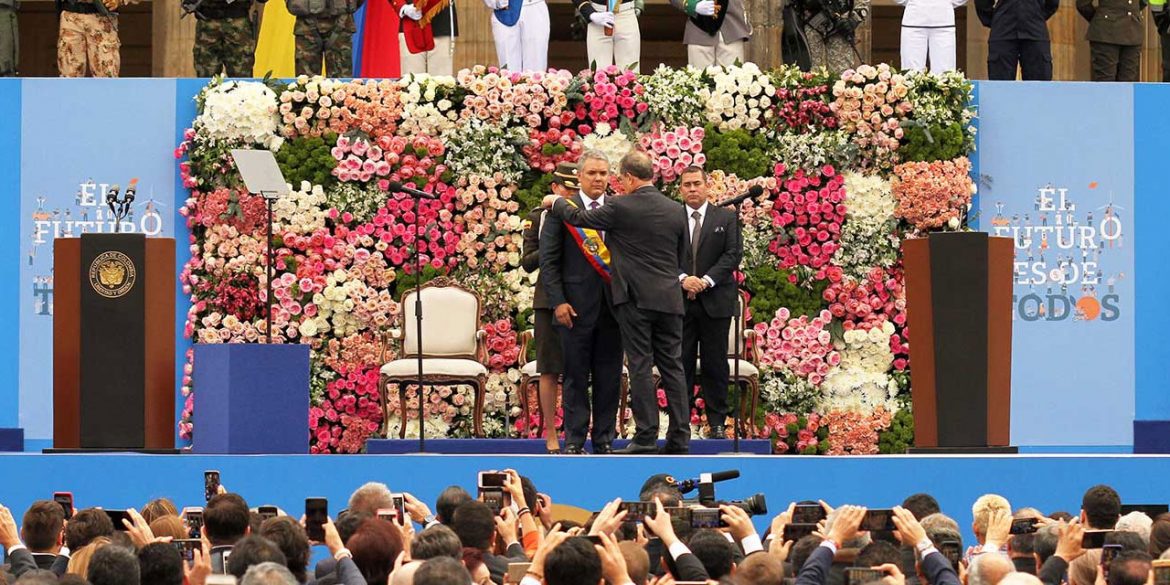 In his first speech as President of Colombia, Ivan Duque vowed to continue a peace process with former FARC rebels and revise ongoing peace talks with the ELN.

The president’s inaugural speech was overshadowed by adversities: strong winds blew the flag on the roof of the capitol half mast and a preceding speech by Congress President Ernesto Macias, blasted the previous administration of Juan Manuel Santos – all while protesters were taking to the streets.

Duque on the contrary was not so harsh on his predecessor and spoke with a considerably more diplomatic voice – dedicating a large amount of his speech to peace and unifying his deeply divided country.

But the president remained firm in his motives to alter the highly controversial peace deal with FARC, the former guerrilla group that became a political party last year.

The protege ex-president Alvaro Uribe, Duque has been mentored by arguably the most divisive figure in Colombian politics. Duque knows the nation is bitterly split – his inauguration was marred by protest at home and abroad. He spend a great deal of time speaking about uniting the nation: “I want to govern Colombia with the spirit of building, never of destroying,” he said.

The self-described “extreme centrist” of the hard-right Democratic Center, said he wanted to “overcome left and right divisions.”

The peace deal with the FARC

One of the main reasons the country is so divided over the new president is because of the 2016 peace deal with the FARC that ended over a half a century of civil war, but has been opposed by Duque and his party.

During his speech, the president said he was for the peace deal but needed to correct “structural failures” of it so victims of the war would receive “truth, proportional justice, reparation and not repetition.”

The former lawyer would like to see tougher sentences dished out to the FARC, who led a bloody war against the state since 1964. But he didn’t allude to the FARC directly, who transformed into a political party last year and now have a number of seats in congress.

Ongoing talks with the ELN

One of the biggest tasks Duque is taking on is the ongoing talks with the country’s last-standing rebel group. Peace negotiations with Marxist rebels, the National Liberation Army – or ELN – have proved mostly fruitless. The group has continued causing mayhem by kidnapping, bombing oil pipelines and recruiting Venezuelans to their cause. Duque said he would dedicate the first 30 days of his government to evaluate and progress the talks with the group.

He said: “I want to make clear that a credible process must be based on the total cessation of criminal actions, with strict international supervision, and defined times. We want to move forward but the Colombian people will not tolerate violence being legitimized as a means of pressure on the State.”

Since the FARC have put down their weapons to form a political party, their once lucrative territory is now up for grabs. This has led to all kinds of armed groups storming the countryside and causing chaos so they can get in on the cocaine and illegal mining trades. Duque focused on these groups – known as BACRIM – in his speech, saying that his government “will not allow dissidents [of the FARC], clans… to continue with what they are doing”. He promised to work with the armed forces to combat such groups, adding: “The moment has come for all of us to unite to fight against illegal groups.”

​Duque is also inheriting a sluggish economy. The former banker said in his speech ​that he would help revitalize the struggling economy with programme which include tax reform. Duque has previously said he would like to diversify the country’s economy and back oil and coal industries.

Duque also said he would take action against the many “scandals of corruption” in Colombia. A hot topic in the presidential election, corruption is rife in Colombian politics – with many members of Duque’s own party being investigated. But the president kept up his campaign promises by saying in his speech that he would send an anti-corruption bill to congress.