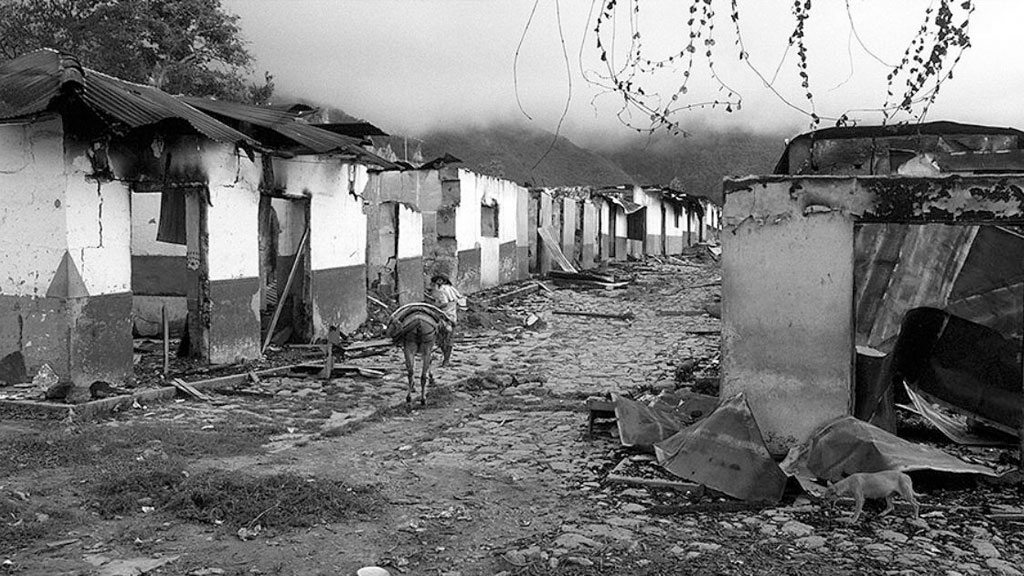 What was left of El Aro after the massacre (Photo: Semana)
News

Colombia’s Supreme Court will move forward with investigations into the October 1997 massacre of El Aro — a paramilitary killing spree that appears strongly tied to the governorship of former president Alvaro Uribe.

Three prosecutors, one of them the vice-Prosecutor General, have been delegated to advance investigations into the 1997 slaughter of at least 14 farmers in the municipality of Ituango, Antioquia known in the country as the El Aro Massacre.

The new investigative direction established by Prosecutor General Eduardo Montealegre will seek to identify the link between five specific crimes related to the El Aro massacre, and to identify if the main authorities of Antioquia had knowledge of or participated in their execution.

Uribe was governor of Antioquia at the time and has long faced allegations he colluded with paramilitary forces.

In the hands of these three prosecutors, allegations indicating Uribe’s participation in the assassinations, who throughout the past two decades has been stained by various testimonies involving him in the El Aro massacre, will be further scrutinized.

The new team of prosecutors will embark on the investigation of specific crimes associated with the El Aro massacre, including the assassination of human rights activist Jesus Maria Valle.

Valle was killed by paramilitaries in February 1998 after publicly insisting the departmental authorities and security forces were complicit in the slaughter of El Aro — including the army, the police and the governorship of Antioquia.

The Justice and Peace Court of Medellin backed Valle’s claims in its extensive September report citing a military helicopter which allegedly landed in Ituango towards the end of the 10-day slaughter, dropping off ammunition to the paramilitaries and evacuating one of its injured members.

Not long before his death, Valle held a public confrontation with Uribe, over the then-governor’s alleged lack of response to the Ituango population, despite desperate calls for protection before and during the massacre — reports that were sent directly to Uribe’s desk, according to the court.

In the wake of the mounting accusations, the new investigating body has stated that the paramilitary incursion in 1997 reportedly had the support of the departmental authorities and commanders of the security forces in the period.

According to Resolution 2039, the investigations will be realized by the prosecutors before the Supreme Court to determine the principal actors involved in the crimes associated with the El Aro massacre, and a potential leader connecting the murders.

In October, the Justice and Peace Court ordered the Accusations Committee of the House of Representatives to publish every fourth months a report indicating the advances in the investigations against the former president.

Additionally, the Medellin Court’s September report accused Uribe of being complicit in Operation Orion, another massacre of an estimated 90 people in Comuna 13 of Medellin in 2002, and of having extensive ties to the paramilitary group AUC during his governorship and presidency of Colombia.

Uribe, current Senator and leader of the right-wing Democratic Center political party — the major opponent to the current peace talks between the government and the FARC guerrilla group in Havana, Cuba — has consistently denied all accusations against him.

“The false court of Justice and Peace has never heard me and uses evidence condemning me to lies,” Uribe tweeted in October.