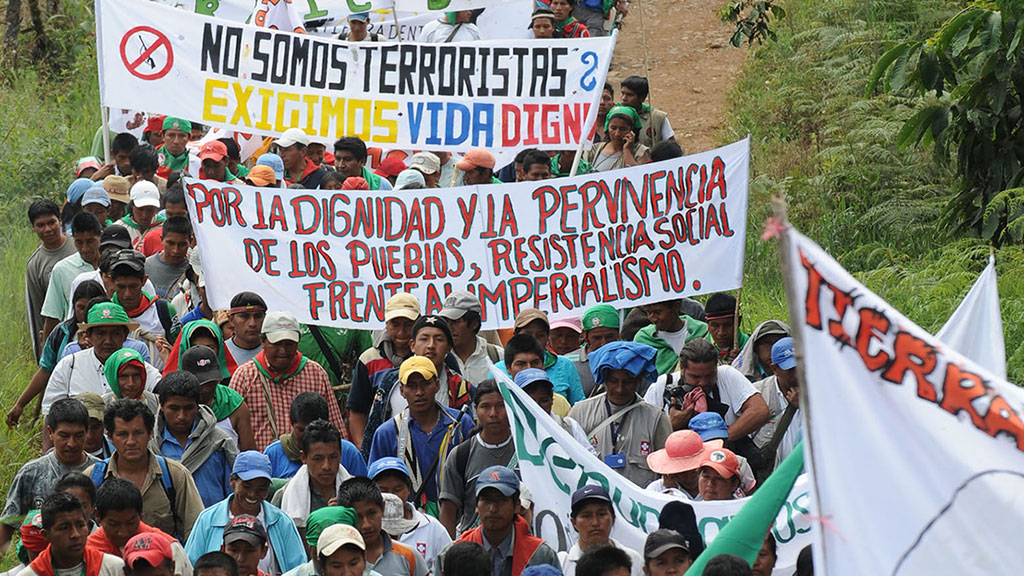 The violence has been taking place in the north of Cauca, a state in the southwest of Colombia with multiple indigenous reserves.

The protests have been going on since November last year, but have so far only been met by police repression in spite of an initial agreement with the agriculture minister over the surrender of 40,000 hectares of land for local indigenous farmers, the indigenous have said on their website.

Over the weekend, seven soldiers were injured in violent clashes with the indigenous, according to authorities.

Local indigenous leader Feliciano Valencia said that the protests left 53 indigenous injured. Earlier on in the protests, the leader had already claimed approximately 100 protesters were injured in clashes.

According to the ONIC, the national indigenous rights organization, protesters have been caught in the line of fire between the military and FARC guerrillas, and have received death threats from both the Rastrojos and the Aguilas Negras, two right-wing neo-paramilitary groups.

According to the local indigenous authority ACIN, the indigenous protesters have occupied several ranches and surrounding lands they claim belong to their territory according to previous deals with the national government.

According to the protesters, local indigenous families have run out of land and in some cases are living with three or four families in one home.

The indigenous say that the lands are now in the hands of large businesses owners like Carlos Ardila Lulle, the owner of large sugar plantations in the region, soda company Postobon, television network RCN and soccer club Atletico Nacional, among other businesses.

The indigenous subsequently proceeded to “liberate Mother Earth” from their occupants, claiming the large land owners are violating environmental regulations in place to protect nature.

To solve the stand-off, Interior Minister Juan Fernando Cristo agreed to meet with indigenous leaders in the capital Bogota.

“The purpose of today’s meeting is to agree on the conditions for a negotiation table with the government, to come up with some sort of road map,” said indigenous leader Orlando Huellas on local news website Proclama del Cauca.

If the meetings are not satisfactory, the protesters might proceed to block the nearby Panamerican Highway that connects Colombia with Ecuador, the indigenous leader warned.

The north of Cauca is home to several indigenous reserves and has long been one of the areas that is most affected by the armed conflict.

The delicate security situation is due to local marijuana plantations and the state’s location alongside a key drug trafficking corridor that connects coca plantations in central Colombia with the Pacific coast.