Colombia’s state-run weapons manufacturer Indumil is illegally trading guns from Germany despite it being against the German law which prohibits the export of arms to countries in conflict, weekly Semana reported Sunday. 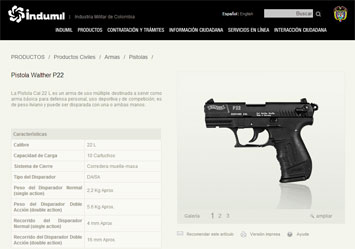 Indumil, the state subsidiary responsible for the legal arms trade in Colombia, has an online catalog selling German pistols and carbines despite the Federal Office of Economics and Export Control (BAFA) in Germany stating that “from 1993 until today no authorization has been granted for the export of such weapons or for a technology transfer to Colombia,” according to Semana magazine.

According to German trade law, weapons companies require government authorization to trade with countries where there is suspicion that the arms may be used for “internal repression or sustained and systematic violation of human rights” according to official regulations.

However, guns by the mark Walther, such as the P22 pistol are on sale via Indumil under a section entitled “imported weapons” calling into question firstly how the weapons came to be in circulation in the country and, furthermore, how it is that they are being sold by a government agency.

Three key ideas as to how the guns came to be Colombia have been identified. Firstly through illegal trading, secondly through a technology transfer in which the German company could have given a Colombian factory the right to produce weapons to Walther specification or three, the weapons could have been traded through the United States which, as a NATO partner country would have had no trouble with the export.

Managing Director of Walther, Manfred Wörz claimed that  the company “cannot say anything about it,” as  they “cannot explain how the gun came to being traded in Colombia,” as well as claiming that the company has not provided weapons or technology to the South American country, according to Deutsche Welle, a German radio station.

However, Jurgen Grassling, member of the German initiative “Action outcry – Stop the Arms Trade”, told Deutsche Welle that he does not believe this to be true. In the past, Grassling has filed complaints with the Attorney General’s Office in Germany against Walther on suspicion of illegal arms trading and illegal licensing and believes that not only are direct exports happening but that Colombian companies are also producing Walther arms.

Whether it be export or transfer of technology, in both cases the company would be breaking the law of war arms control as well as the foreign trade law of Germany.

Germany is the third largest arms exporter in the world after the U.S. and Russia . In 2012 export licenses were granted for a total of close to 8,900 million euros.