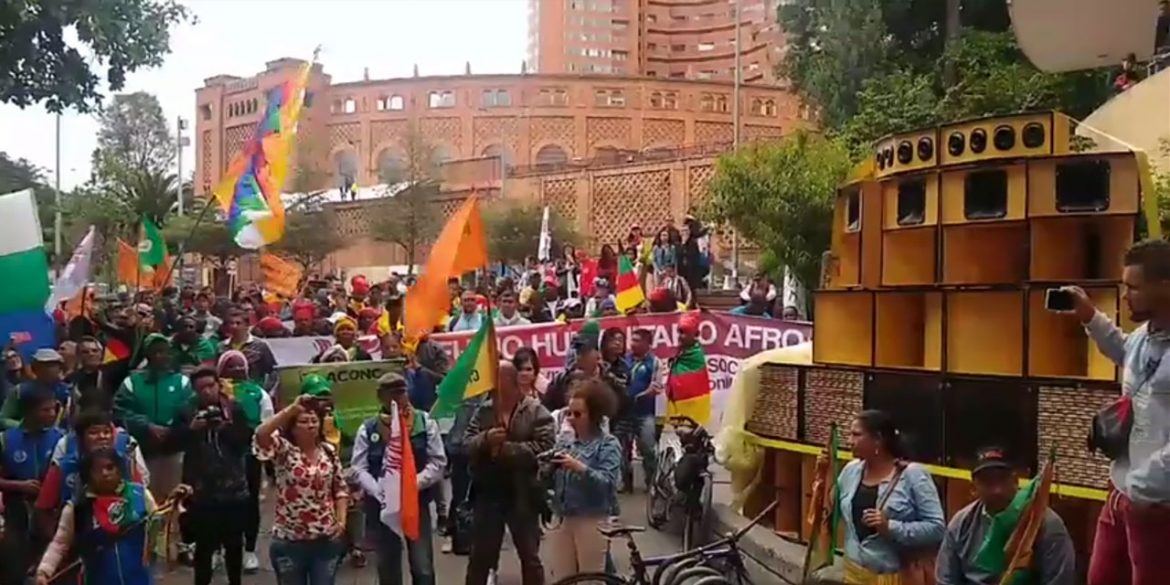 Around 1,500 social leaders from across Colombia have gathered at a humanitarian refuge in a plaza in Bogota, opened in protest against rising violence against leaders, human rights defenders and former FARC rebels.

The refuge opened on Sunday and will remain in place until Thursday.

The project aims to sensitize the population to the alarming rise in violence against social leaders, and to work with bodies in Bogota to find solutions and adequate protection strategies.

We believe that the National Government, the departmental and municipal governments have not done enough, have not demonstrated a real and effective commitment to the leaders to safeguard their lives and guarantee their rights.

Luis Emil Sanabria, Director of Redepaz – one of the groups coordinating the shelter

As well as murder and displacement, the movement is also protesting the prosecution and stigmatization which the Colombian state itself promotes.

Redepaz also argues that there are not sufficient guarantees for the transition to social and political life of ex-combatants.

Last year was 44% more violent than 2017, with 805 acts of aggression against social leaders, including 155 assassinations, according to a study released last week.

Hundreds joined a march in Bogota on Sunday, and the demonstration will continue with a number of civic actions, including a public hearing in Congress, request for protection measures from the German, French, and Spanish embassies, and engagement with the Truth Commission.

There will also be discussions around possible self-protection measures, including the idea of permanent refuges across Colombia.

Around 3,000 leaders and activists are expected to come from Cauca, Nariño, Choco, Catatumbo (Norte de Santander), Bajo Cauca (Antioquia), the South of Bolivar and Arauca, among other regions.

Believing that the solution is strictly military is a mistake of the Government, there must be another type of action which relates to the culture of peace, the culture of human rights, ensuring that social and community organizations function and can work in their territories.