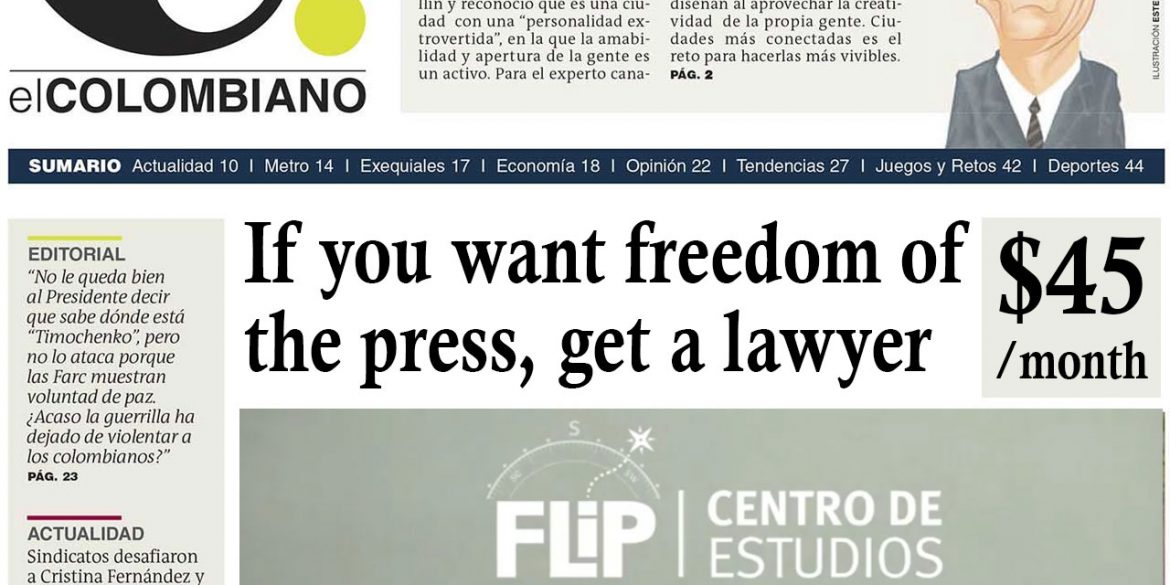 How to guarantee Colombia’s press freedom without foreign grants

Colombia’s freedom of the press is protected by the constitution, which means journalists need lawyers for protection, not a foundation that costs more than $800,000 a year.

Between 2017 and 2019, 583 journalists received death threats compared to 257 in the three years before, according to the 2019 report of press freedom foundation FLIP.

How many journalists were sexually harassed or assaulted — possibly the most recurring violation of journalists’ rights — the FLIP failed to mention.

To produce its beautifully designed report that nobody read, the foundation received $865,351 last year, 36% more than in 2018.

The deterioration of journalists’ rights and the freedom of the press likely increased the cost of monitoring violations and the bureaucracy that comes with it.

To effectively stop this trend and guarantee the freedom of the press or the rights of journalists, the foundation recommended to increase the effectiveness of the prosecution and the National Protection Unit.

Legal aid, arguably the most important protection measure, was not even mentioned even though this has been a key deterrent against violations of the freedom of the press and the rights of journalists throughout the world.

Lawyers would not have protected the two journalists who were assassinated last year, but would’ve been helpful for victims of slapp suits that seek to censor journalists, excessive police force and even death threats.

Journalist federation FECOLPER offers legal assistance for $45, which provides the labor security journalists need to to their job without fear of being fired, harassed or sued.

The FLIP, however, seems to consider leaving journalists without any legal defense no threat to journalists or the freedom of the press, despite registering 66 arbitrary detentions.

Everything indicates that providing legal security to journalists would greatly enhance the freedom of the press and journalists’ rights in Colombia, but would probably leave the FLIP without their annual $865,351 as they would be rendered obsolete.