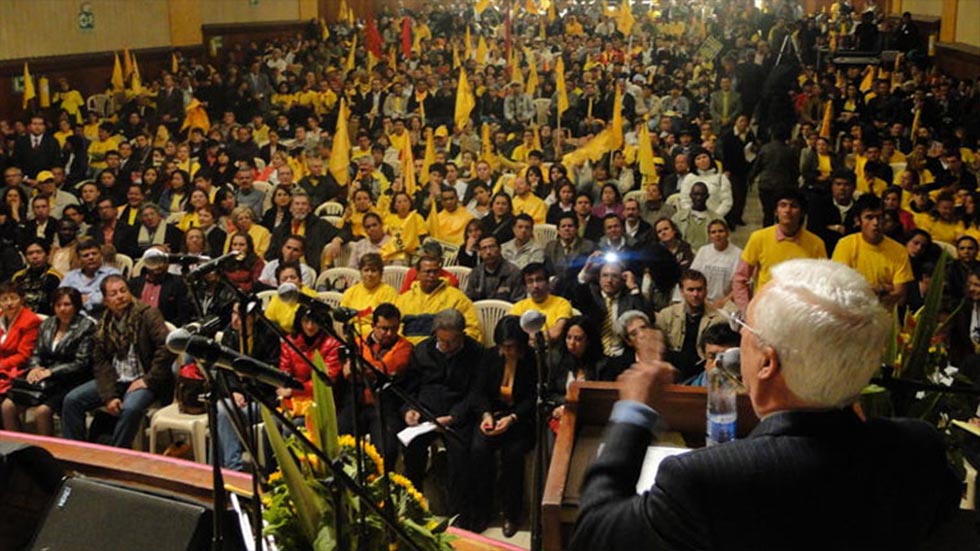 Leftist parties have long been a marginal force in Colombia’s politics, except in the capital Bogota where they have ruled for the past 12 years.

At the time, Garzon was a member of the Democratic Pole (PDA), a social-democratic party run by dynasty politician Clara Lopez.

The moderate leftist was able to maintain optimism in the city that had been growing since Enrique Peñalosa held office between 1998 and 2000, and continued under Antanas Mockus‘ second term between 2000 and 2003.

During his four years in office, the city’s first Democratic Pole mayor introduced a number of social policies that strengthened his party’s popularity in the city, especially among the poor.

By the end of his term, Garzon enjoyed a 69% approval rate, paving the way for the election of Samuel Moreno, the grandson of former dictator Gustavo Rojas and prominent fellow member of the PDA.

Riding Garzon’s wave of popularity, Rojas was elected mayor and took office on January 1, 2007, which is when everything began going wrong for both Bogota, Rojas and the Democratic Pole.

Instead of continuing four years of solid leadership, Rojas went on an alleged embezzlement binge.

Together with befriended construction companies, the mayor and others in both local and national politics created an elaborate kick-back scheme.

The corruption went so far that those taking part in the scheme made even more money through purposely delaying public works projects and exceed their original budgets.

The corruption led to a rapid deterioration of Bogota’s clogged road system.

Moreno was ultimately arrested in 2011 and replaced by his chief of staff and party leader Lopez. The former mayor has been in jail awaiting trial since then.

The scandal ripped apart the PDA and one of its most prominent members, former Senator Gustavo Petro, separated to form the Progressives Party and run for mayor independent of his former party.

While fed up with Moreno’s corruption, the bogotanos were not yet ready with the left.

In fact, less than half a year after Moreno disappeared behind bars, the city elected Gustavo Petro, a former guerrilla and prominent anti-corruption senator, to become mayor.

The outspoken Petro, however, experienced fierce opposition in both the city council and the national government after he took office on January 1, 2012.

Unable to gather a majority coalition to support his progressive agenda, Petro tried ruling by decree.

The new mayor was able to fix some of the issues in regards to the city’s infrastructure and public transport system caused by the Moreno administration, but the lack of collaboration between city hall and the city council resulted in a stagnating city government.

Meanwhile, crime and violence indicators began climbing, and — in spite of the mayor’s efforts to promote more income equality — economic inequality in the capital increased.

The hostility between Petro and conservative political forces came to a boil in 2014 when Inspector General Alejandro Ordoñez, a staunch conservative, ousted the mayor in spite being prohibited to do so by the Inter-American Commission for Human Rights.

Paradoxically, Ordoñez’ move undermined civilian initiatives that sought a referendum to legally oust the unpopular mayor whose approval rating at times sank to 26%.

Approaching the end his term, Petro faced criticism for failing to execute more than half of the priority projects he himself had set at the beginning of his term.

PDA chief Lopez tried mobilizing the left to vote for her in Sunday’s election, but as her party had now become associated with some of the city’s worst corruption cases in recent history and some of the most ineffective mayors in memory, she failed.

Bogota, weary of its own leftist politicians, elected the center-right Enrique Peñalosa instead.