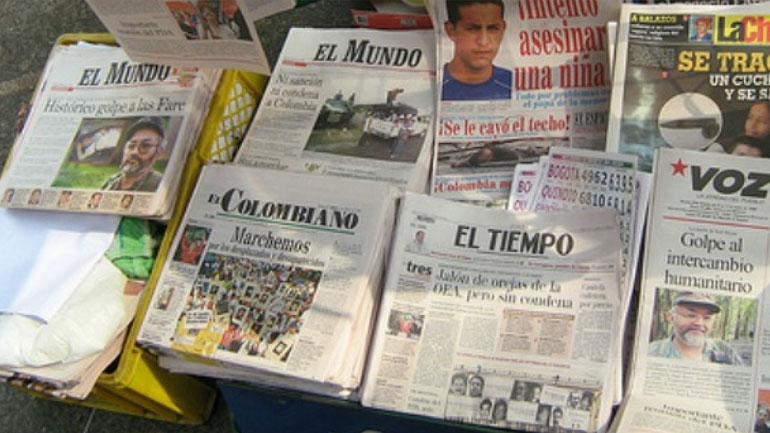 Media ownership in Colombia is highly monopolized by economic and political powerhouses who too often use their outlets to promote their own political and economic interests, according to a Reporters without Borders (RSF) investigation.

The international journalism advocacy group kicked off a pilot program in Colombia to uncover who owns which news outlet and how this affects the quality and veracity of the information.

“Media pluralism is a key aspect of any democratic society, since only independent and free media are able to reflect the true variety of opinions of a society, Reporters Without Borders secretary general Christophe Deloire said. “Uncovering concentration in the media market is an important first step towards ending the unchecked influence of dominant media owners.”

Through a website called “De Quien Son los Medios,” results on the ongoing investigation of media ownership and concentration of media power are made public.

The website shows a highly monopolized media landscape in Colombia.

In the television, radio and newspaper industry alike, no more than two owners control more than half of the industry, while on local levels, radio stations and newspaper are often in the hands of local dynasties.

More than 74% of the national audience depends on only two media companies, the Organizacion Ardila Lulle that owns RCN and the Santo Domingo group that owns Caracol.

These two groups, owned by some of Colombia’s richest and most powerful families, receive 78.1% of advertising revenue.

“The interests that influence the editorial lines are more related to economic interests rather than political interests,” according to the media monitor.

The Santo Domingo group is owned by the family of the same name whose power reaches further than just Caracol TV. The family also owns some of Colombia’s largest radio stations, owns a significant percentage of multinational brewer SABMiller, and a number of international trade and transport companies.

The two media companies have been able to frustrate years-long attempts to commission a third private channel, which would compete with RCN and Caracol.

Also in radio, the Ardila Lulle group is the largest player, securing a market share of 30%. The Bogota corporation is followed by Spanish media conglomerate Prisa. Together, these two corporations own 59% of the market.

“The main impact of the concentration of radio stations’ ownership is seen in the lack of plurality of information. While there are a variety of stations in the country, only few programs offer information, opinion or analysis,” according to the monitoring website.

“Combining the concentration of ownership and the limited offer of pluralist informative programs, you can see the creation of a biased public opinion on which the major economic groups have great possibility to influence,” said the monitor.

This one-sided reporting is even worse on a local level, said the RSF. “Local radio stations have increasingly converted into an echo of what is produced and transmitted in the mayor cities.”

Colombia does not really have national newspapers. While Bogota newspapers like El Tiempo and El Espectador claim being national, their coverage is mainly about Bogota-related issues.

In other cities and regions, the readership is mainly consumed by regional media that are “closely linked to regional political elites.”

Unlike in television, the newspapers seem to obey to both political and economic interests, according to the monitor.

“The ownership of print media companies is in the hands of powerful families of the political elite who hold or have held important public offices at the local, regional and national levels, and also have several economic interests because of their participation in other sectors of the economy,” said the website.

The latter media dynasties have teamed up with the Lloreda family of Cali‘s El Pais newspaper and the Galvis family of Bucaramanga’s Vanguardia newspaper to create the Grupo Nacional de Medios that also own national press agency Colprensa.

All aforementioned families are deeply involved in politics in their respective area.

According to the media monitor, the journalists working for these regional media are censored while the media are commonly used to promote the political and economic interests of their owners.